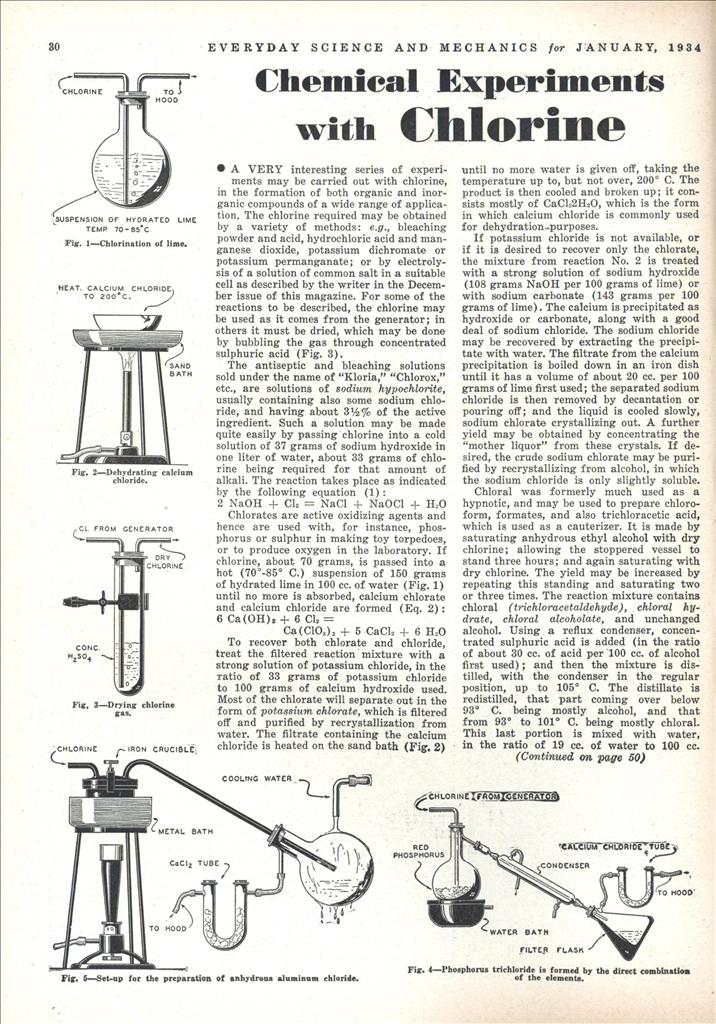 • A VERY interesting series of experiments may be carried out with chlorine, in the formation of both organic and inorganic compounds of a wide range of application. The chlorine required may be obtained by a variety of methods: e.g., bleaching powder and acid, hydrochloric acid and manganese dioxide, potassium dichromate or potassium permanganate; or by electrolysis of a solution of common salt in a suitable cell as described by the writer in the December issue of this magazine. For some of the reactions to be described, the chlorine may be used as it comes from the generator; in others it must be dried, which may be done by bubbling the gas through concentrated sulphuric acid (Fig. 3).

The antiseptic and bleaching solutions sold under the name of “Kloria,” “Chlorox,” etc., are solutions of sodium hypochlorite, usually containing also some sodium chloride, and having about 3%% of the active ingredient. Such a solution may be made quite easily by passing chlorine into a cold solution of 37 grams of sodium hydroxide in one liter of water, about 33 grams of chlorine being required for that amount of alkali. The reaction takes place as indicated by the following equation (1):

2 NaOH + Cl2 = NaCl + NaOCl + H20 Chlorates are active oxidizing agents and hence are used with, for instance, phosphorus or sulphur in making toy torpedoes, or to produce oxygen in the laboratory. If chlorine, about 70 grams, is passed into a hot (70°-85° C.) suspension of 150 grams of hydrated lime in 100 cc. of water (Fig. 1) until no more is absorbed, calcium chlorate and calcium chloride are formed (Eq. 2): 6 Ca(OH)2 + 6 Cl2 = Ca(C103)3 + 5 CaCl2 + 6 H20 To recover both chlorate and chloride, treat the filtered reaction mixture with a strong solution of potassium chloride, in the ratio of 33 grams of potassium chloride to 100 grams of calcium hydroxide used. Most of the chlorate will separate out in the form of potassium chlorate, which is filtered off and purified by recrystallization from water. The filtrate containing the calcium chloride is heated on the sand bath (Fig. 2) until no more water is given off, taking the temperature up to, but not over, 200° C. The product is then cooled and broken up; it consists mostly of CaCl22H2O, which is the form in which calcium chloride is commonly used for dehydration-purposes.

Chloral was formerly much used as a hypnotic, and may be used to prepare chloroform, formates, and also trichloracetic acid, which is used as a cauterizer. It is made by saturating anhydrous ethyl alcohol with dry chlorine; allowing the stoppered vessel to stand three hours; and again saturating with dry chlorine. The yield may be increased by repeating this standing and saturating two or three times. The reaction mixture contains chloral (trichloracetaldehyde), chloral hydrate, chloral alcoholate, and unchanged alcohol. Using a reflux condenser, concentrated sulphuric acid is added (in the ratio of about 30 cc. of acid per 100 cc. of alcohol first used); and then the mixture is distilled, with the condenser in the regular position, up to 105° C. The distillate is redistilled, that part coming over below 93° C. being mostly alcohol, and that from 93° to 101° C. being mostly chloral. This last portion is mixed with water, in the ratio of 19 cc. of water to 100 cc.

chloride, benzoyl chloride, etc. To make it: pass dry chlorine into dry red phosphorus contained in a flask heated on a boiling-water bath, and connected with a condenser. The receiver had best be a small Alter or distilling flask, the side tube of which is connected with a calcium chloride tube, with an exit hose leading outside (Fig. 4). From 350 to 400 grams of chlorine will be required per 100 grams of phosphorus; or the gas may be passed until most of the red phosphorus has disappeared. A solid yellow residue in the flask indicates the formation of some phosphorus pentachloride. The distillate is mixed with about 5 grams of red phosphorus and redistilled; pure phosphorus trichloride boiling at 76° C. It should be kept in a glass-stoppered bottle, since it reacts violently with water, forming phosphorous and hydrochloric acids.

Many important organic syntheses are made by using anhydrous aluminum chloride as a catalyst; it is made on the large scale by passing dry chlorine through an arc maintained between aluminum electrodes. To prepare the salt In the laboratory, pass dry chlorine over dry aluminum turnings, filings, or powder contained in a small iron retort, which is heated to about 350° C. This Is done best in a metal bath; lead may be used in the bath (Fig. 5.). A glass retort or a small distilling flask may be substituted for the iron retort, but some difficulty will be experienced from the aluminum chloride’s stopping up the delivery tube. In any case, the delivery tube should lead into a receiver, such as a filter or Florence flask of fair size, which is cooled by a spray of water and which is connected with the outside through a calcium-chloride drying tube. Aluminum chloride sublimes at 183° C. and is very hygroscopic; so that it must be kept in a glass-stoppered bottle, protected with wax, or better, sealed glass tubes.

—Bruce Lehman. ‘ of chloral, and then poured out in a clean mortar or dish. The chloral hydrate solidifies; and may be broken up and recrystallized from chloroform or water.

Chloroform is frequently used in the laboratory for extractions and may be made by the action of iron on carbon tetrachloride, or by treating alcohol or acetone with bleaching-powder solution; the easiest method of making pure chloroform is by decomposing chloral or chloral hydrate with a warm dilute alkali (x); producing chloroform and an alkaline formate, according to equation (3).

CCl8CH(OH)a + XOH = CHCl3 + HCOOX + HsO The reaction is carried out by mixing the alkaline solution and the chloral hydrate in a flask, attaching a condenser, and warming slowly on a water bath, chloroform distilling over at 61° C. For each 100 grams of crystallized chloral hydrate, use a solution of 25 grams of sodium hydroxide in 200 cc. of water, or a suspension of 30 grams of calcium hydroxide in the same amount of water. The chloroform may be dried with calcium chloride and redistilled; when made in this way It is very pure, being free from alcohol and acetone. The yield should be about 70 grams of chloroform per 100 grams of chloral hydrate used.

The residue in the flask from making chloroform contains an alkaline formate, and excess alkali. To recover the formate, concentrate on the water bath, first filtering, if lime was used, until crystallization begins; and then set aside to cool and continue crystal formation. More formate may be obtained from the mother liquor; and the yields should be, .per 100 grams of chloral hydrate, about 40 grams of sodium formate or 6 5 grams of calcium formate.

Phosphorus trichloride is used to make chlorides of organic acids, such as acetyl