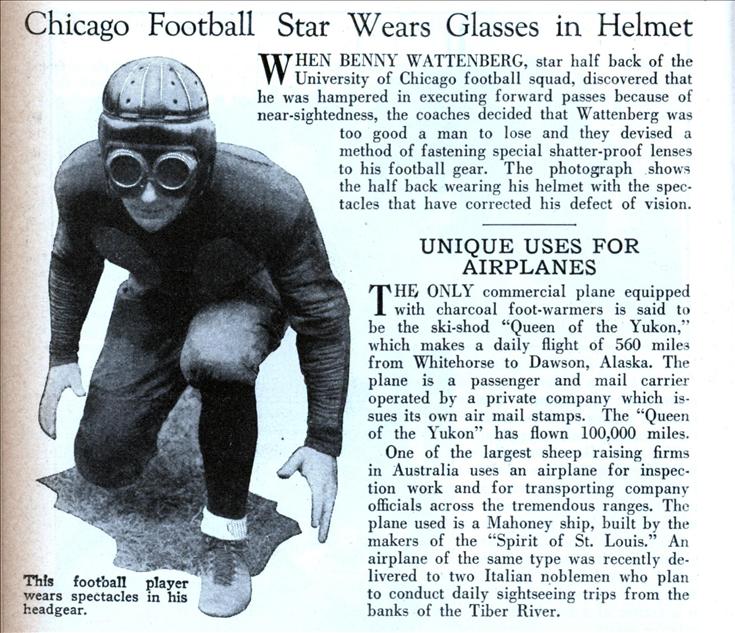 WHEN BENNY WATTENBERG, star half back of the University of Chicago football squad, discovered that he was hampered in executing forward passes because of near-sightedness, the coaches decided that Wattenberg was too good a man to lose and they devised a method of fastening special shatter-proof lenses to his football gear. The photograph shows the half back wearing his helmet with the spectacles that have corrected his defect of vision.

UNIQUE USES FOR AIRPLANES
THE ONLY commercial plane equipped with charcoal foot-warmers is said to be the ski-shod “Queen of the Yukon,” which makes a daily flight of 560 miles from Whitehorse to Dawson, Alaska. The plane is a passenger and mail carrier operated by a private company which issues its own air mail stamps. The “Queen of the Yukon” has flown 100,000 miles. One of the largest sheep raising firms in Australia uses an airplane for inspection work and for transporting company officials across the tremendous ranges. The plane used is a Mahoney ship, built by the makers of the “Spirit of St. Louis.” An airplane of the same type was recently delivered to two Italian noblemen who plan to conduct daily sightseeing trips from the banks of the Tiber River.