Chicago Is Making Her Dream of a Beautiful Metropolis Come True (Oct, 1921) 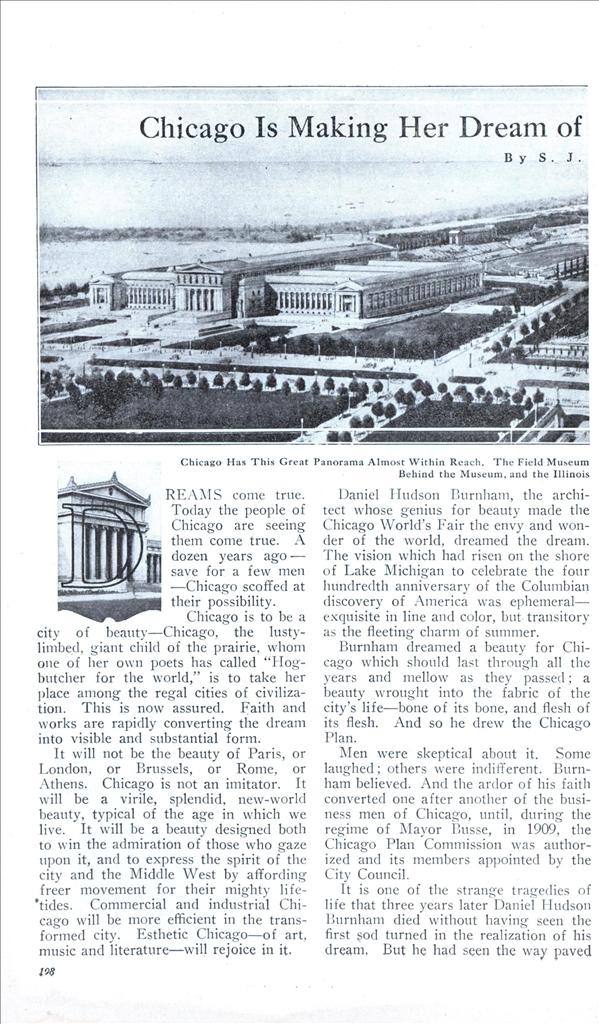 Chicago Is Making Her Dream of a Beautiful Metropolis Come True

REAMS come true. Today the people of Chicago are seeing them come true. A dozen years ago — save for a few men —Chicago scoffed at their possibility. Chicago is to be a city of beauty—Chicago, the lusty-limbed, giant child of the prairie, whom one of her own poets has called “Hog-butcher for the world,” is to take her place among the regal cities of civilization. This is now assured. Faith and works are rapidly converting the dream into visible and substantial form.

It will not be the beauty of Paris, or London, or Brussels, or Rome, or Athens. Chicago is not an imitator. It will be a virile, splendid, new-world beauty, typical of the age in which we live. It will be a beauty designed both to win the admiration of those who gaze upon it, and to express the spirit of the city and the Middle West by affording freer movement for their mighty lifetides. Commercial and industrial Chicago will be more efficient in the transformed city. Esthetic Chicago—of art, music and literature—will rejoice in it.

Daniel Hudson Burnham, the architect whose genius for beauty made the Chicago World’s Fair the envy and wonder of the world, dreamed the dream. The vision which had risen on the shore of Lake Michigan to celebrate the four hundredth anniversary of the Columbian discovery of America was ephemeral— exquisite in line and color, but transitory as the fleeting charm of summer.

Burnham dreamed a beauty for Chicago which should last through all the years and mellow as they passed; a beauty wrought into the fabric of the city’s life—bone of its bone, and flesh of its flesh. And so he drew the Chicago Plan.

Men were skeptical about it. Some laughed; others were indifferent. Burnham believed. And the ardor of his faith converted one after another of the business men of Chicago, until, during the regime of Mayor Busse, in 1909, the Chicago Plan Commission was authorized and its members appointed by the City Council.

It is one of the strange tragedies of life that three years later Daniel Hudson Burnham died without having seen the first god turned in the realization of his dream. But he had seen the way paved for its turning’. He had lived to see the dream translated into diagrams and drawings and city ordinances, and to know that other men would carry on to completion the task he had begun. ”

As I have intimated, utility and beauty are combined in the Chicago Plan. Provision of adequate avenues for traffic is one of the great problems confronting a modern city. In a city of Chicago’s size and population it is a problem of vital importance. The life of Chicago has for years suffered from the constriction of its business center in the “loop.” Minutes that would aggregate days are lost every twelve hours by the delays of congestion in the passage of vehicles through this rectangular maelstrom.

The foundation of the Plan is the creation of a central quadrangle, within four great arteries of traffic which will provide for a free circulation from and about the heart of the city. The loop district is thus expanded from a quarter of a square mile in area to one and one-half square miles.

Michigan Avenue, on the east, Canal Street, on the west, Roosevelt Road, on the south, and Water Street, on the north, constitute the arterial boundaries of the quadrangle. Many of the improvements relate themselves to the development of these highways.

The illustrations with this article show something of what has been accomplished and what will soon appear with the progress of the work which is now under way.

But the Plan also includes the development of Chicago’s chief natural glory, her frontage on Lake Michigan. Already the possibilities of Grant Park, which lies east of Michigan Boulevard, take form under the eye of the proud Chicagoan. The quiet dignity of the Art Institute holds a central place by priority in the scheme which is unfolding. Southeast of it the Field Museum adds its stately beauty to the scene. A new Illinois Central Station will transform the somewhat unsightly section between the boulevard and the Museum, and later a great stadium, conforming to classical lines of architecture, will take its place in this notable group of buildings. The Illinois Central lines are to be electrified within the city, eliminating the smoke and cinders which have been a blemish to Chicago’s lake front.

The widening of Michigan Avenue— familiarly known in Chicago as Boul Mich—was one of the first big improvements to be undertaken and completed.

From Roosevelt Road, on the South, to Chicago Avenue, on the North, the spacious boulevard now constitutes one of the handsomest highways in the world. It cost $14,896,892 to carry through this project. Massive buildings had to be taken down or moved back from the street line. The new avenue measures one hundred and thirty feet in width south of the river, and from the river north to Chicago Avenue, one hundred and sixty feet in width.

The old Rush Street bridge— the Brooklyn bridge of Chicago —which served as a narrow isthmus to carry a vast and ceaseless traffic between the loop and the North Side, was replaced by a new, two-level bascule bridge, two hundred and thirty-five feet in length and ninety feet in width, flanked by plazas at both approaches, each of which approximates two hundred and twenty-five square feet in area. Although not a part of the original Chicago Plan, the new Municipal Pier fits into the scheme admirably as a feature in the improvement of the lake front. This remarkable structure, completed at a cost of $3,400,000, measures three thousand feet, or more than a half mile, in length, and two hundred and ninety-two feet in width. At its eastern end, surrounded by the waters of Lake Michigan, is a vast and beautiful recreation hall, over an eighth of a mile in length. The pier is municipally owned.

On the West Side the development of the Plan has been slower, chiefly owing to governmental delay in making provision for a new post office, which is to be one of the main features of the remodeled Canal Street. If favorable Congressional action is obtained, the new post office—desperately needed by Chicago, whose business long since outgrew the capacity of the present structure— will occupy a two-block site between Madison and Adams Streets on the western side of Canal Street. To the north of it will stand the imposing building occupied by the North Western Railroad, and to the south of it the new Union Station.

South Water Street, which has been humorously termed the esophagus of Chicago because so much of the city’s food passes down it, is being transformed from a hugger-mugger of river-front ugliness into a trade artery of dignity and beauty.

More than fourteen thousand acres of forest land in and around Chicago have been acquired since the launching of the Plan and added to the magnificent system of forest preserves, which mean much to a city destined some day to number five million people. New outer driveways are being constructed, girding the city, and the North Side and South Side park systems will be linked by a boulevard along the shore of the lake.

The people are no longer skeptical. They believe in the dream. They have voted $61,510,000 in bonds to prove their faith. The railroads have agreed to spend $162,091,350. The Forest Preserve Commission has already spent $5,316,762. The enhanced values of property are demonstrating that these expenditures are profitable investments. The Chicago Plan Commission claims that it is a revenue-producing body, and its claim is justified.