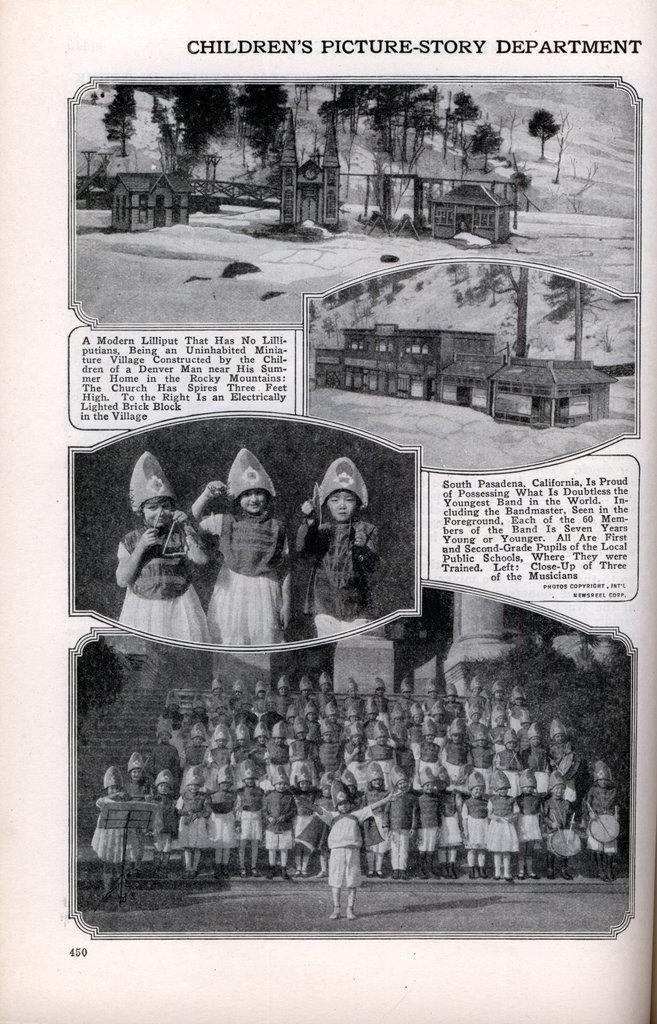 A Modern Lilliput That Has No Lilliputians, Being an Uninhabited Miniature Village Constructed by the Children of a Denver Man near His Summer Home in the Rocky Mountains: The Church Has Spires Three Feet High. To the Right Is an Electrically Lighted Brick Block in the Village

South Pasadena, California, Is Proud of Possessing What Is Doubtless the Youngest Band in the World. Including the Bandmaster, Seen in the Foreground, Each of the 60 Members of the Band Is Seven Years Young or Younger. All Are First and Second-Grade Pupils of the Local Public Schools, Where They were Trained. Left: Close-Up of Three of the Musicians

Four Spanish Boys, in the Suburbs of Madrid, Using Their Own Peculiar Kind of Scooter to Give Them Greater Speed in a Foot Race: Their Name for This Kiddie-Car Is “Rado”

Driven by Forest Fires from the Shore While Fishing for Salmon, This Grizzly Bear had to Swim for His Life. A Boat Put Off from the Other Shore, and This Remarkable Photo was Taken, in Spite of the Grizzly’s Efforts to Avoid It

This Stone Football was Awarded as a Trophy to the Friends University of Wichita, Kansas, When the Quaker School Defeated Fairmount College, of the Same Town, by a Score of 26 to 3. It Weighs 500 Pounds, and was Given by the Midian Shrine Temple Circus Committee

Theft Insurance is Not Needed by the Owner of This Car, in London, England. He Considers It Perfectly Theft-Proof When Guarded in This Manner by the Watchful Cheetah, the Hunting Leopard of India, as Fierce as He Is Wary