Chinese people don’t kiss? I guess if Popular Science says it then it must be true. 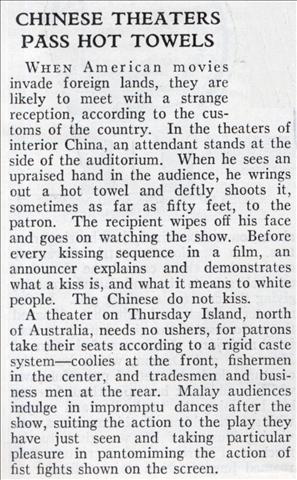 When American movies invade foreign lands, they are likely to meet with a strange reception, according to the customs of the country. In the theaters of interior China, an attendant stands at the side of the auditorium. When he sees an upraised hand in the audience, he wrings out a hot towel and deftly shoots it, sometimes as far as fifty feet, to the patron. The recipient wipes off his face and goes on watching the show. Before every kissing sequence in a film, an announcer explains and demonstrates what a kiss is, and what it means to white people. The Chinese do not kiss.

A theater on Thursday Island, north of Australia, needs no ushers, for patrons take their seats according to a rigid caste systemâ€”coolies at the front, fishermen in the center, and tradesmen and business men at the rear. Malay audiences indulge in impromptu dances after the show, suiting the action to the play they have just seen and taking particular pleasure in pantomiming the action of fist fights shown on the screen.