Choose your course with this computerized golf game (Feb, 1980) 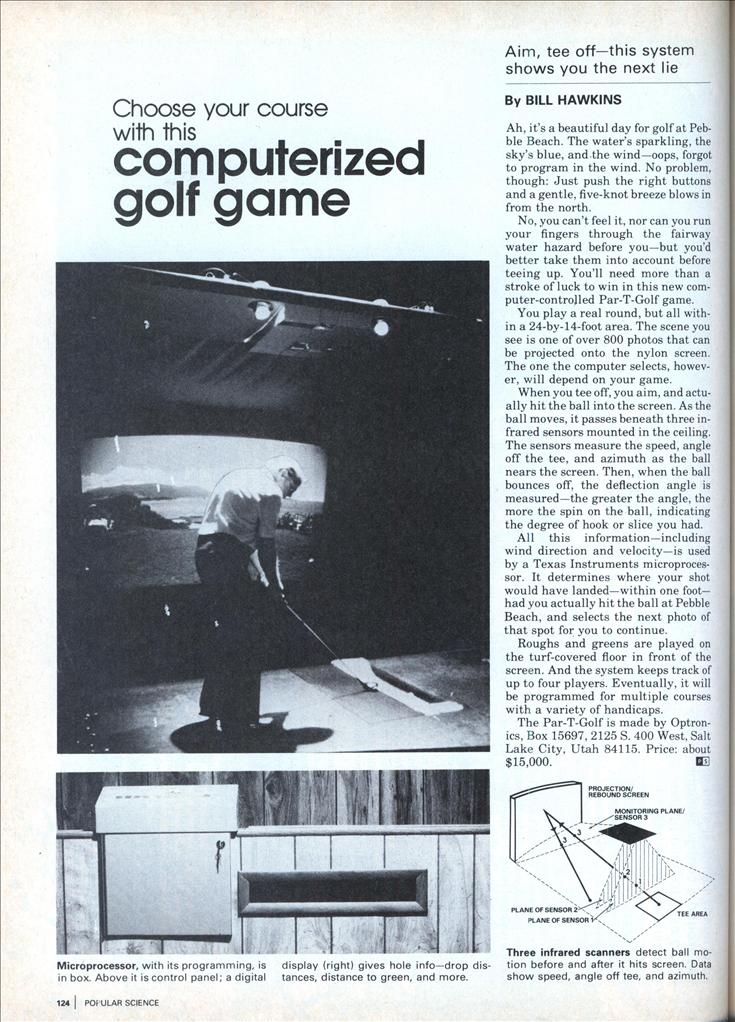 Choose your course with this computerized golf game

Aim, tee off—this system shows you the next lie By BILL HAWKINS

Ah, it’s a beautiful day for golf at Pebble Beach. The water’s sparkling, the sky’s blue, and the wind—oops, forgot to program in the wind. No problem, though: Just push the right buttons and a gentle, five-knot breeze blows in from the north.

No, you can’t feel it, nor can you run your fingers through the fairway water hazard before you—but you’d better take them into account before teeing up. You’ll need more than a stroke of luck to win in this new computer-controlled Par-T-Golf game.

You play a real round, but all within a 24-by-14-foot area. The scene you see is one of over 800 photos that can be projected onto the nylon screen. The one the computer selects, however, will depend on your game.

When you tee off, you aim, and actually hit the ball into the screen. As the ball moves, it passes beneath three infrared sensors mounted in the ceiling. The sensors measure the speed, angle off the tee, and azimuth as the ball nears the screen. Then, when the ball bounces off, the deflection angle is measured—the greater the angle, the more the spin on the ball, indicating the degree of hook or slice you had.

All this information—including wind direction and velocity—is used by a Texas Instruments microprocessor. It determines where your shot would have landed—within one foot-had you actually hit the ball at Pebble Beach, and selects the next photo of that spot for you to continue.

Roughs and greens are played on the turf-covered floor in front of the screen. And the system keeps track of up to four players. Eventually, it will be programmed for multiple courses with a variety of handicaps.