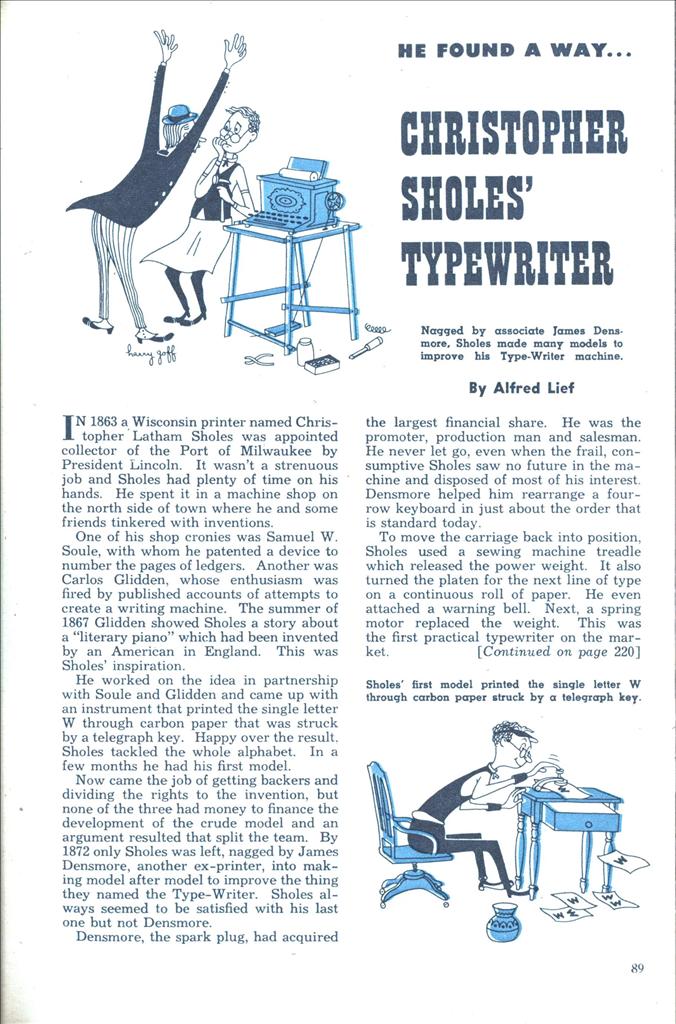 Nagged by associate James Densmore, Sholes made many models to improve his Type-Writer machine.

IN 1863 a Wisconsin printer named Christopher Latham Sholes was appointed collector of the Port of Milwaukee by President Lincoln. It wasn’t a strenuous job and Sholes had plenty of time on his hands. He spent it in a machine shop on the north side of town where he and some friends tinkered with inventions.

One of his shop cronies was Samuel W. Soule, with whom he patented a device to number the pages of ledgers. Another was Carlos Glidden, whose enthusiasm was fired by published accounts of attempts to create a writing machine. The summer of 1867 Glidden showed Sholes a story about a “literary piano” which had been invented by an American in England. This was Sholes’ inspiration.

He worked on the idea in partnership with Soule and Glidden and came up with an instrument that printed the single letter W through carbon paper that was struck by a telegraph key. Happy over the result. Sholes tackled the whole alphabet. In a few months he had his first model.

Now came the job of getting backers and dividing the rights to the invention, but none of the three had money to finance the development of the crude model and an argument resulted that split the team. By 1872 only Sholes was left, nagged by James Densmore, another ex-printer, into making model after model to improve the thing they named the Type-Writer. Sholes always seemed to be satisfied with his last one but not Densmore.

Densmore, the spark plug, had acquired the largest financial share. He was the promoter, production man and salesman. He never let go, even when the frail, consumptive Sholes saw no future in the machine and disposed of most of his interest. Densmore helped him rearrange a four-row keyboard in just about the order that is standard today.

To move the carriage back into position, Sholes used a sewing machine treadle which released the power weight. It also turned the platen for the next line of type on a continuous roll of paper. He even attached a warning bell. Next, a spring motor replaced the weight. This was the first practical typewriter on the market.

All that were made were sold—to telegraph offices, court reporters and lawyers. The only trouble was that they cost more to produce than the price people were willing to pay.

Debts piled up and the promoting group made a deal in 1873 with E. Remington & Sons, makers of guns and sewing machines, to manufacture 1,000 typewriters which were to be sold by Densmore and his associates. Remington set apart a section of its large factory at Ilion, N. Y., and assigned expert mechanics to the task of remodeling the machine.

Densmore opened a store on Hanover Street, N. Y., and waited for the first deliveries. They came in July 1874—the Sholes & Glidden Type-Writer, advertised as affording a speed of 30 to 60 words a minute, saving time, paper and postage. The price was $125. As Sholes had a one-tenth interest in the royalty, he was entitled to $1.25 a machine.

Sales were slow. Remington revamped the machine and added a shift key for lower-case letters in 1878. Sholes didn’t like what had • been done to his brain-child. He fretted, concentrated on a portable model and gave up the last of his rights to Densmore in 1880. His patents were about to expire anyway. A tally of the sum Sholes received from Densmore through the years came to $25,000.

Not long after, the Remington Company was itself in need of funds and sold its typewriter business to another firm, which adopted the Remington name. The spade work had been done. The typewriter had won acceptance in the business world.

Visible typing was not developed until 1893, three years after Sholes’ death. Further improvements and the pressure of competition brought about today’s precision machines.

Christopher Latham Sholes, known as the father of the typewriter, might well be called the great-grandfather of the close to 1,000,000 machines that are now made each year. •