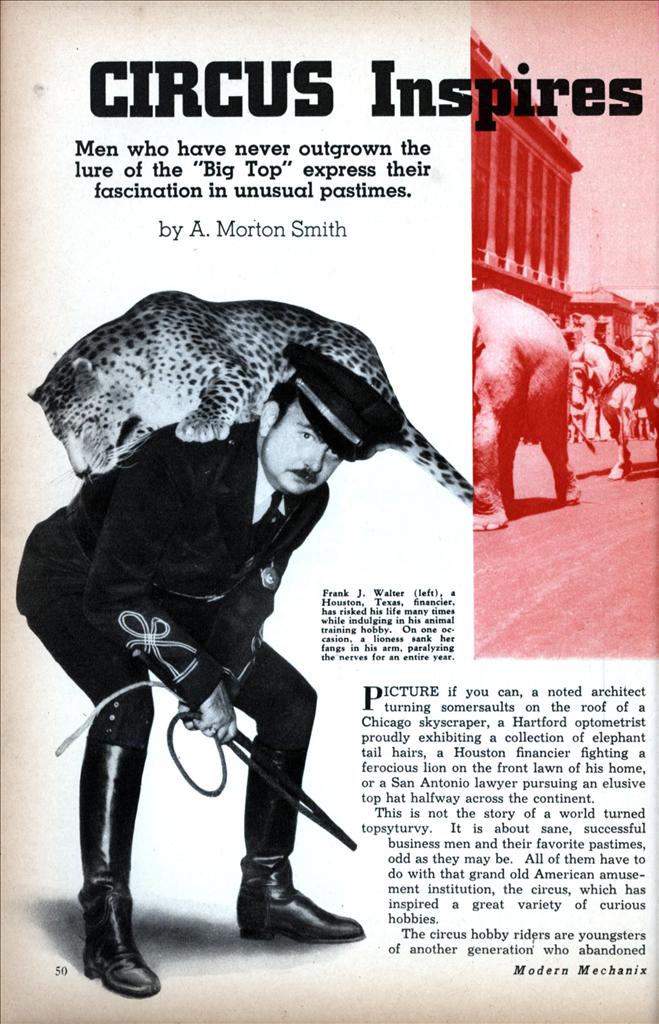 Men who have never outgrown the lure of the “Big Top” express their fascination in unusual pastimes.

by A. Morton Smith

PICTURE if you can, a noted architect turning somersaults on the roof of a Chicago skyscraper, a Hartford optometrist proudly exhibiting a collection of elephant tail hairs, a Houston financier fighting a ferocious lion on the front lawn of his home, or a San Antonio lawyer pursuing an elusive top hat halfway across the continent.

This is not the story of a world turned topsyturvy. It is about sane, successful business men and their favorite pastimes, odd as they may be. All of them have to do with that grand old American amusement institution, the circus, which has inspired a great variety of curious hobbies.

The circus hobby riders are youngsters of another generation who abandoned their childhood fancies for business and industry, but who have never overcome the lure of the big top and the joys of circus day.

Oddest of these hobbies is that of Charles E. Davis of Hartford, Connecticut, who boasts of a collection of tail hairs from 104 elephants, all neatly tied with thread and kept in envelopes labeled with the names of the animals in alphabetical order.

Davis ran away with a circus at 14, found elephants absorbing, and after establishing himself as an optometrist in his home town, began the task of compiling elephant biographies. So engrossed did he become in his research work that he wanted a memento of each of the big beasts and hit upon the idea of collecting tail hairs. He prizes highly the tail hairs of a baby elephant which died at birth in 1917. Old Mom, heroine of many circus stories, gave up half of her hair to his collection for her keeper found but four hairs on her tail. And John, the leader of the Ringling Brothers herd, minus a single tail hair, is represented by several of his unusual red chin whiskers.

Perhaps the largest of circus collections is that of Harry Hertzberg, San Antonio, Texas, attorney. The last census of his circus museum revealed 30,000 items ranging from posters of Rickett’s Circus, which was attended by George Washington and was the first show of its kind in America, to the battle-ax of the wild man from Borneo and the tiny coach in which Tom Thumb rode.

To acquire such an imposing collection which includes programs, posters, heralds, route books, personal effects of performers, hundreds of autographed photographs of circus artists and thousands of other articles, Hertzberg has pursued his hobby the nation over. He has visited the birthplace of circus owners and artists, the winter quarters of dozens of shows and libraries and museums in quest of rare articles. Once he dashed half way across the United States to obtain a top hat for his extensive collection of the personal effects of Tom Thumb, the midget discovered and exploited by the late Phineas T. Barnum.

John P. Grace, who manufactures electrical fixtures in Kokomo, Indiana, meticulously compiles circus statistics. He has on file, the complete routes of some 315 circuses that have toured this country since the 60’s, along with the number of vehicles in the entourage, the sizes of the tents, the number of persons with the shows and other salient facts about physical equipment. Not infrequently, circus executives write and telegraph him for information about their own show, which their records fail to reveal, but which Grace maintains as a labor of love.

Sverre O. Braathen, Madison, Wisconsin, attorney, and Mrs. Braathen have a summer home, White Tops, which fairly radiates circus atmosphere. It is entered through a canopy of red and white striped canvas. A queen’s throne from a tableau wagon is the divan in the living room. The chandelier is a sunburst wheel from a band wagon, a globe in each of the 14 spokes. The floor is green to represent the circus lot, and three circular red rugs suggest the three-ring arena.

The Braathens’ contribution to circus literature is a history of the Ringling brothers, which they are compiling from files of newspapers of the past 50 years and from data and material in the State Library in Madison.

Several circus fans follow their hobbies in the sawdust ring itself. Harper Joy, Spokane, Wash., investment banker, annually spends his vacation traveling with a circus as a clown. He rides in a stateroom aboard the circus train, as do the stars of the big tops, takes along his trunk of clown costumes, and when the horde of jesters files into the tent, Harper Joy, the banker, is just another clown, taking the bumps and making funny faces for the amusement of the kiddies, yes— but principally for his own satisfaction.

Frank Portillo, government printer in Washington, D. C, is another devotee of clowning. He spends a day here and there as guest clown and in the past five years, has made up in the dressing tents of 22 circuses, from the greatest show on earth down to the smallest of one-ring outfits.

Even more earnest in following such a hobby is Frank J. Walter, Houston, Texas, financier, who actually risks his life quite often to satisfy his hobby. Young Walter’s interest in animals began as a school lad with a bear cub a friend sent him. He taught it tricks, learned more about animal training from the zoo keeper in his home town, and started a collection of animals.

Now his handsome estate has all the appearance of a winter quarters with four score trained horses, ponies and mules, a lion, a leopard, a high wire walking goat, several dogs and monkeys, a sacred cow and a herd of Alaskan deer.

Walter, with the assistance of his attractive wife, operates a one-ring animal circus solely for the entertainment, in Houston parks and playgrounds, of underprivileged and crippled children. And the Walters provide plenty of lemonade and peanuts to make the event a complete success.

Several times Walter has sustained painful injuries pursuing his animal training hobby. Once his fighting lioness sank her teeth in his left arm and refused to turn loose. The nerves were paralyzed and it was more than a year before Walter regained use of the member.

Now his hobby is expanding as he adds to his collection of animals, circus wagons of historical value. In the group are a score of gilded cages, tableau wagons, caliopes, clown police patrol, and band wagons. Most cherished of his possessions is a 50-year-old band wagon of the old Barnum and Bailey circus, which he discovered in a Sweetwater, Texas, warehouse, and the original Gentry Brothers ticket wagon, built in the early 80’s.

Mechanically inclined circus fans find model building their forte. One of the foremost model circus builders is Joseph W. Taggert, Rockford, Illinois, jeweler, who has constructed a complete scale model of Ringling Brothers-Barnum and Bailey circus. Scaled one-half inch to the foot, the replica is complete from folding grandstand chairs the size of postage stamps, to the pea-sized blocks which hold the tiny aerial rigging in place.

The model show contains 14,000 pieces, required five years to build, and all equipment loads into handsome model wagons which best demonstrate his art. His reproduction of the famous Barnum and Bailey two-hemisphere band wagon is 20 inches long, eight inches wide and ten inches high, contains 10 pounds of gold leaf, required 2,000 hours to construct and is complete to the minutest detail of the seals of all nations which ornament it.

One ardent fan even attributes his longevity of life to his interest in the circus. He is Irving K. Pond, Chicago architect, who designed Hull House and Chicago Commons and served as president of the American Institute of Architecture.

When he observed his 77th birthday last May, he demonstrated his physical prowess by executing a dozen backward and forward somersaults, just as he had done on every birthday since he was a youngster.

From the time he saw his first circus at five, he was an ardent fan. At 10, he accomplished a forward somersault; at 12, a backward flip. In college, he made the first touchdown in an intercollegiate football game west of the Allegheny mountains in 1879.

His somersaults today, he says, show much better form than 50 years ago, for in half a century he has met and known intimately the foremost tumblers of the world and has written a book, “The Art of the Circus,” dealing with acrobatic feats.