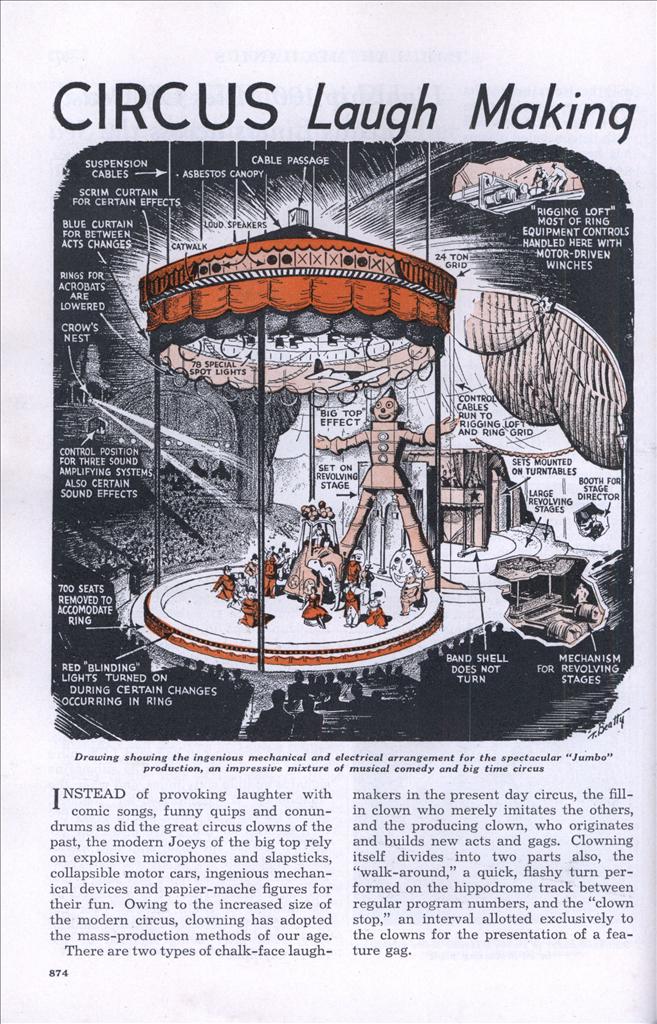 INSTEAD of provoking laughter with comic songs, funny quips and conundrums as did the great circus clowns of the past, the modern Joeys of the big top rely on explosive microphones and slapsticks, collapsible motor cars, ingenious mechanical devices and papier-mache figures for their fun. Owing to the increased size of the modern circus, clowning has adopted the mass-production methods of our age. There are two types of chalk-face laugh- makers in the present day circus, the fill-in clown who merely imitates the others, and the producing clown, who originates and builds new acts and gags. Clowning itself divides into two parts also, the “walk-around,” a quick, flashy turn performed on the hippodrome track between regular program numbers, and the “clown stop,” an interval allotted exclusively to the clowns for the presentation of a feature gag.

Clown gags usually are worked by two or more persons because the stunt must tell a story. It is, in reality, a short-short comedy, embodying action and atmosphere and suggesting an incident or a series of incidents. The producing clown’s job is no sinecure these days. His antecedent could use a pantomime routine year in and year out but the modern clown must be thinking up new tricks constantly. Selling laughs to a world weighed down with worries is exacting work that taxes the ingenuity of even the greatest clowns.

The Joey must not only think up his gags but also build whatever “props” are necessary. A gag may be born of pure inspiration or progressive workmanship. Otto Griebling of the Cole Brothers-Clyde Beatty show thinks up most of his turns while lying in bed. He keeps a notebook at his bedside so he won’t forget his ideas by morning. Lew Hersey of the Al G. Barnes circus, works out his stunts with the aid of a circus-loving merchant in the Kansas town where he spends his winters. But no matter where the ideas originate or who helps produce them, the clowns must come up each spring with a new series of sure-fire laugh hits. Even on the road during the season, the clown constantly is eradicating out-moded stunts and substituting new ones. A stunt that required months of thought and labor may prove a failure when presented, while some simple one coined on the spur of the moment may become a high light.

Clowning is an exact science. If there is a single flaw in the execution of a gag it may not produce a single smile. Nemo’s experience with the Ringling, Barnum and Bailey show a few seasons ago illustrates the point. Garbed in a woman’s nightgown and a boudoir cap, Nemo would render “How Dry I Am” on a sour-toned cornet until a bucket of water fell on him. The first few times he tried it the audience did not respond with even a smile. One day he accidentally picked up the dripping nightgown and held it about him differently than on previous attempts. This simple movement struck a responsive chord in the audience and transformed an erstwhile dud into a screamingly funny gag. A clown will do an endless amount of work and research to devise a stunt. Lew Hersey knew if he could build a prop in which a lifelike goose would appear to be chasing him he could garner a bumper crop of laughs. He knew the force of the gag would be lost with a poor imitation of a real goose, so with his merchant partner, he set out to build a perfect prop. They scanned dozens of goose pictures until they found one in a half-running, half-flying position. The framework was then fashioned out of more than 400 feet of wire, requiring approximately 500 soldered joints. To facilitate packing the goose in a prop trunk, the body, wings, neck and head were built separately and equipped with assembly screws. Covering the framework with muslin, the workers then enlisted aid in applying real feathers. When completed, the goose was fastened to the clown’s body with steel rods and canvas straps so that as he raced around the hippodrome track the goose was right on his heels with wings flapping wildly.

Newspapers, magazines and the radio furnish the clowns with inspiration. Otto Griebling’s impersonation of a political figure giving a radio speech caused wide comment. In pantomime, the clown ranted and gesticulated into a dummy microphone. At the conclusion of the stunt, he was flat on his back, kicking and waving wildly and breaking the microphone to pieces. Milt Taylor’s travesty of Arctic explorers is a typical clown stunt. Donning a decrepit fur coat, he drives a wheel-driven sled around the hippodrome track with three small fox terriers as malemutes.

There are many burlesques of other acts in the show, too, such as Chesty Harmon’s imitation of Clyde Beatty’s animal act. Wearing a pith helmet and white duck shorts, the giant clown puts a diminutive fox terrier in a lion suit through its paces. Circus fans who laughed at Silvers Oakley’s one-man baseball game, or saw Lon Moore wrestle him-self a few years ago are equally amused watching Felix Adler of the Ringling show give an imitation of a Victorian dowager attempting to pick up her purse. As he bends over, his hoop skirt goes over his head, and he goes through several funny stunts before solving the problem.

George White of the Hagenbeck-Wallace troupe gets plenty of laughs with his patented cigar lighter. To set the lighter in motion, a billiard ball is started down a wire chute and then passes through a trough, striking a lever that tips a sprinkling can. Thus are the paper flowers in a near-by pot watered and when they spring up, a parrot bends over to pluck them, but in so doing riles a stuffed cat whose tail shoots up to the trigger of a revolver. This causes the gun to explode and the flash from the blank cartridge ignites a torch. From this White procures a light. He spends his spare time keeping the device in working order.

Papier-mache figures are widely used, each clown being required to make at least one walk-around in one. The comic strips and animated movie characters come in for a lion’s share of attention here. A few clowns do two characters on the same trip. The elongated Kinko of the Cole Brothers-Clyde Beatty show has a prop in which he is Mutt when he stands up but by bending over he becomes Jeff. The change is effected by means of a false head strapped under the folds of his costume. Jimmy McCoy of the same show works his evolution theory, “Man to Monkey,” on a similar principle.

The most elaborate make-up used by any of the modern clowns is, perhaps, Paul Jerome’s. He has been the No. 1 clown tramp of the past twenty years. He must take unusual precautions in putting on his make-up because in his putty nose is encased a small light bulb that flashes whenever he pulls a string. His dog adds to the stunt with a light on the tip of its tail. And Ray Barret of the Al G. Barnes show, whose immaculate props have won for him the title of America’s “neatest clown,” has an imitation stove built on his head that flares up as soon as he pulls the string.