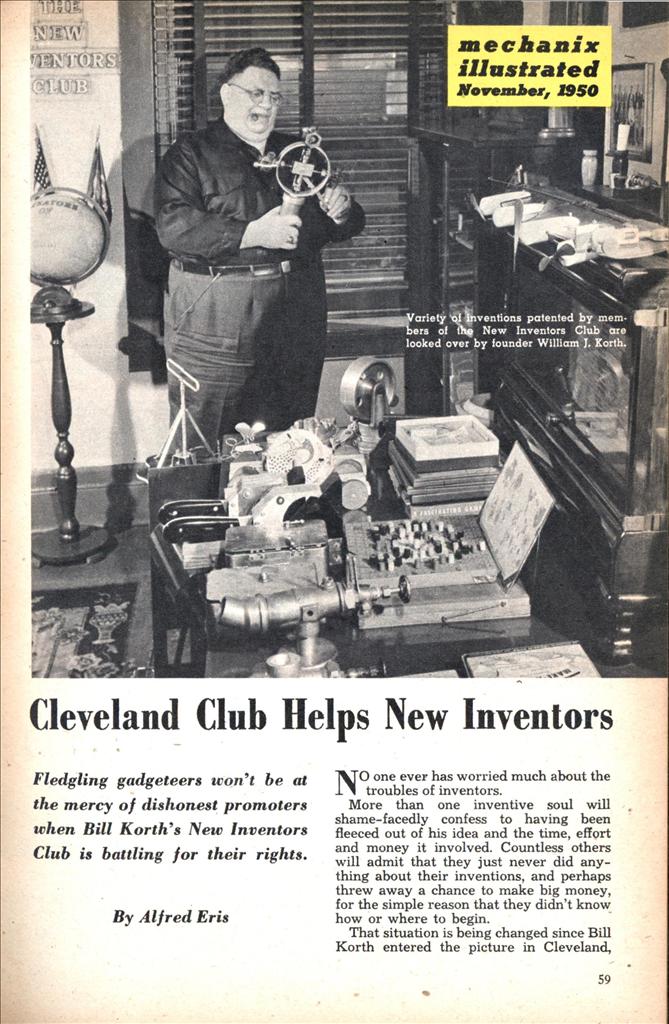 Fledgling gadgeteers won’t be at the mercy of dishonest promoters when Bill Korth’s New Inventors Club is battling for their rights.

NO one ever has worried much about the troubles of inventors.

More than one inventive soul will shame-facedly confess to having been fleeced out of his idea and the time, effort and money it involved. Countless others will admit that they just never did anything about their inventions, and perhaps threw away a chance to make big money, for the simple reason that they didn’t know how or where to begin.

That situation is being changed since Bill Korth entered the picture in Cleveland, Ohio. His New Inventors Club sees to it that fledgling inventors are no longer at the mercy of sharks and dishonest promoters, and it’s willing to lend a helping hand whenever needed. For example: Recently, an inventor came to the office of the New Inventors Club with drawings of a lawnsprinkler. It was obvious that the device was completely impractical for it involved the use of supporting prongs which would tear into lawns. It lacked the “easy-to-use” feature all such devices should have and was expensive to manufacture.

At the Club, the lawnsprinkler was equipped with a double-duty cutting tool; its bad features were eliminated, and it was simplified so that it could be turned out in mass production. Thus improved and patented, it sold fast—and in the thousands!

“Aaaaa,” you ask, leering skeptically, “but what did all this help cost the inventor?”

Well, five bucks is the answer!

William J. Korth and several friends started the Club a few years ago. They met in the rear of a tinsmith’s shop but today, with over 1000 members—some as far away as Africa and the Hawaiian Islands—the New Inventors Club occupies most of a floor at 5511 Euclid Avenue in Cleveland, and will probably move shortly to a building of its own. The primary purpose of the Club is to hire legal talent cheaper, make patent searches quicker and find manufacturers for new products.

Korth maintains a full-time patent attorney in Washington to make searches, another full-time attorney in the offices of the Club, draughtsmen, model-makers and other specialized personnel. In addition, he , personally interviews about 32 inventors each day, exclusive of the many who consult him by telephone or are assisted by his receptionists.

His background is responsible for his intense interest in helping inventors. His father operated a novelty paper-hat shop in Brooklyn, N.Y., and one day Korth, Jr. had a brainwave and simplified an important manufacturing step. His parents were overwhelmed—and another inventor was launched. Korth then began working on gadgets and came up with one winner after another.

In each case, however, his experience was identical—he was cheated! Four times he was paid from $25 to $100 for inventions which, he found later, sold in fabulously large quantities and made lots of money. There was a lemon-squeezer, an improved window-cleaner, a bathing shoe and a pencil sharpener.

“I got disgusted,” he says—and began to work as a free-lancer, improving manufacturing equipment for industrialists. He charged nothing unless his improvements worked and saved substantial sums for the plants. Then, his fee was based on the yearly savings effected by his improvements. Working in this fashion, he rolled up checks for $10,000 to $30,000.

With a background as versatile as that, Korth has little difficulty in handling the problems inventors bring before him. The $5 membership dues represents all an inventor has to pay and entitles him to free advice and consultation the year round. If he needs working models, searches or patent applications he then pays on a fixed-price basis at lower rates that he could possibly get oh his own.

If he needs help, he can get that too. Club rules in this respect are—”If your idea is not fully developed and the Club’s Consulting Board cannot improve on your idea, we then call in members of the Club, in the category of your invention, to see if they can offer any improvements. Everything developed on your idea belongs to YOU. The members called in for development on your idea do not charge for their time, and the Club does not charge you for the developments.”

The Club doesn’t guarantee to make a best-seller of any item, no matter how bad. But, there’s the case of the inventor who submitted a working model of a collapsible umbrella. It was a work of art, a miracle of ingenuity, a triumph of engineering—but impractical, nevertheless. It was too elaborate. too bulky and cost too much to make. Today the principle of that umbrella is being offered as a ride for kiddies, with practically the same engineering structure.

When some inventors have their pet ideas rejected they really seem brokenhearted. When he rejects their brainchildren, Korth asks them “Isn’t it better to be turned down now rather than to go ahead with this and wind up being taken for a ride by gyp promoters?”

If you’re the suspicious type and don’t trust your grandmother, much less Korth, Bill has the answer for you, too. When you join the Club, you’re given a Patinvent, a copyrighted form which you fill out listing details of your invention.-Then you send it to yourself by registered mail. When received, you don’t open it, but file it carefully away. A duplicate is filed with the New Inventors Club. In the event of any squabble later your registered Patinvent proves you had the idea first.

The Club’s motto is, From Idea to Sale —and it lives up to the slogan. Many a manufacturer has asked Korth “Do we have to do business with the inventor? If so, the deal is off.” Some inventors are notorious for ruining business deals and for these the Club will take over if desired. Says Korth: “I’ve never met an inventor who was a crack salesman; they undersell or oversell.”

The New Inventors Club acts as the inventors’ agent and collects for its services a flat ten per cent of royalties. Through personal contact with manufacturers and through distribution of its bulletin to firms and Chambers of Commerce all over the country, the Club has obtained contracts for dozens of inventors. But nothing is done without the inventor’s full approval—the Club advises and recommends but it is Joe Doakes, inventor, who decides whether he cares to sign the contract.

“What if the Club helps me to patent my invention” you ask, “and I wanna sell it on my own?” Quite simple—you pay the Club $15 extra for its help, then peddle your invention yourself, all rights belonging to you. But more than one inventor has taken this step and come back to the Club later after a few narrow escapes from inventor-mangling sharks.

Club members come from all walks of life and include the ladies, too. Take Teresa Knaver, of Cleveland. She has seven brothers, several of them engaged in mechanical work and has been exposed to a lot of shop talk since she was an infant. It had its effect, for she now has four patents pending. Her inventions include a new type of clothes hamper, a safety-control for cars and a tube squeezer.

Curt W. Tyner, of Lorain, Ohio, is a pipe-welder by trade and has a patent pending on Bike-Wing, a unit he made first for one of his four daughters. It’s a plastic gadget which clips on to any child’s bike and with one to four propellers “converts” it to a plane.

Then there’s James F. Connor of Cleveland who is an engineer. His invention of a booster-vibrator for heavy excavating equipment was snatched up immediately for consideration by the Army. His other invention is the trademarked Relco,a shopping bag which “puts the load on wheels.” It consists of a collapsible canvas bag mounted on wheels which the housewife can carry with her on buses. When it is full, she can simply roll it along the ground.

Many Club members have had enough confidence in their brainchildren to go into % business for themselves, manufacturing and marketing on their own. Nathan Moschell, a salesman, is marketing his own Tot-Holder, a safety vest for kiddies. Raymond Philips, a telephone man, is selling a protector for pipe threads. Stanley Kozikowski is taking mail orders for Lip-Rite, a stencil for applying lipstick. William Delzani, a bartender, stuck closely to his own trade and came up with a cocktail tray which he is now marketing on his own. Another shoemaker who stuck to his last is Walter Worman, an electrical maintenance man who devised a ladder turret which can be attached to any truck.

Sometimes, inventions have strange beginnings. Joseph Freedson, an engineer, was called upon by a manufacturer to devise a method of piercing raisins so that they could take color for use on cakes and novelties. In three weeks, Freedson had the problem solved—and now markets his own Fruit Piercing Machine.

Production costs are naturally the greatest obstacle to making and selling your own gadget. John Grosser, a salesman of auto parts, got the idea for a folding clothes-line hanger. “I had had several other ideas,” says Grosser, “but waited too long and others beat me to it.” So he was determined to get this one on the market himself.

The dies alone came close to $2000, but Grosser managed to scrape up enough to hurdle this barrier. He’s successfully selling the hanger now for $13.95.

Many great inventions have been fathered by pure accident and one product of the New Inventors Club falls into this classification. Inventor Paul J. Annas is almost completely deaf. One day his hearing aid was troubling him and he had removed it. He had some gelatin capsules on his desk and just happened to put one into his ear, much as some people do when toying with pencils. He was shocked— he could hear! Annas tried it again and again —there was no doubt about it, sounds were coming through!

After a great deal of experimentation with the aid of Dr. Raymond A. Bice, Annas has a hearing aid unlike any other in the world. It is so sensitive that it can be used only with one eardrum.

The Club recognized the importance of this immediately and sent for 128 hearing-aid patents- from Washington in order to check on their claims. Nothing similar was found. The Annas-Bice aid is nothing more than a bit of medicated chemical tissue—a substitute for the ear membrane. No batteries, no wire —just chemical tissue. It makes the eardrum so sensitive that you can whisper from several feet away to a deaf man using the tissue, with the assurance that he will hear perfectly. It’s by no means a cure-all—it will work with most but not all cases of deafness.

Korth himself has many inventions on the fire. Some of his pet projects are beauties, too —he has mailboxes which ring a buzzer when the mail is inserted and light up to notify the caller that messages may be left. He also has a machine which cuts duplicate keys in about 30 seconds.

But Korth doesn’t find much time for his own gadgets these days because inventors all over the country are discovering his New Inventors Club. By mail, by phone and in person they are asking for his help. Why is there such a demand? Well, to paraphrase Mark Twain on Missouri, weather, everybody talks about the troubles of the inventor but nobody ever does anything about them. Korth, very simply, is doing something! •