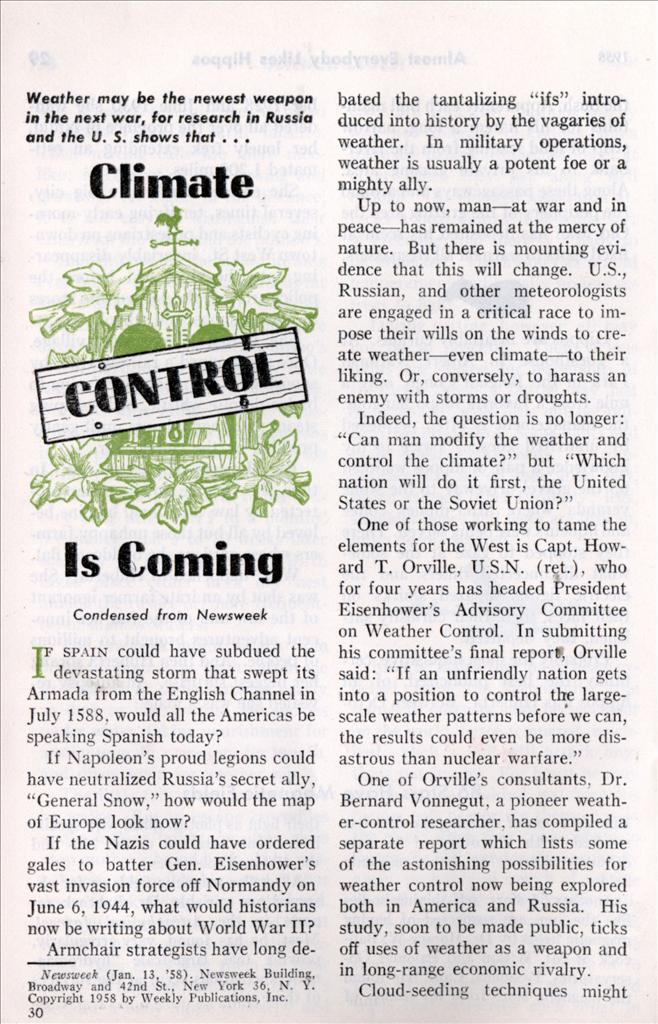 Up to now, man—at war and in peace—has remained at the mercy of nature. But there is mounting evidence that this will change. U.S., Russian, and other meteorologists are engaged in a critical race to impose their wills on the winds to create weather—even climate—to their liking. Or, conversely, to harass an enemy with storms or droughts.

Indeed, the question is no longer: “Can man modify the weather and control the climate?” but “Which nation will do it first, the United States or the Soviet Union?”

One of those working to tame the elements for the West is Capt. Howard T. Orville, U.S.N, (ret.), who for four years has headed President Eisenhowers Advisory Committee on Weather Control. In submitting his committee’s final report Orville said: “If an unfriendly nation gets into a position to control the large-scale weather patterns before we can, the results could even be more disastrous than nuclear warfare.”

One of Orville’s consultants, Dr. Bernard Vonnegut, a pioneer weather-control researcher, has compiled a separate report which lists some of the astonishing possibilities for weather control now being explored both in America and Russia. His study, soon to be made public, ticks off uses of weather as a weapon and in long-range economic rivalry.

Cloud-seeding techniques might be used to open large holes in cloud formations to increase visibility for air raiders, Vonnegut states. The same principles might also be employed to increase cloud cover over enemy territory — perhaps eventually to hang a long-lasting curtain over a given area, blotting out all sunlight.

Doctor Edward Teller, the hydrogen-bomb scientist, recently described the potentialities of such a fair-weather monopoly, “Please imagine,” he told the Senate Preparedness subcommittee, “a world . . . where (the Soviets) can change the rainfall in our country in an adverse manner. They will say, ‘we are sorry if we hurt you. We are merely trying to do what we need to do in order to let our people live.’ ”

To this warning Prof. Henry G. Houghton, Massachusetts Institute of Technology meteorologist, added: “I shudder to think of the consequences of a prior Russian discovery of a feasible method of weather control … an unfavorable modification of our climate in the guise of a peaceful effort to improve Russia’s climate could seriously weaken our economy and our ability to resist.”

The meteorologists’ growing understanding of how and where weather is born is allowing man to intervene more and more with the elements. Earth’s weather is brewed in the comparatively thin (8 miles deep) layer of the lower atmosphere by an exquisite balance of cosmic and terrestrial forces.

Life-giving solar radiation pours down on the earth’s surface; some heats the ground, some is reflected back to heat the air, and some evaporates water in the world’s oceans, lakes, and seas. > Overhead, like a glass roof of a giant greenhouse, the atmosphere imprisons the heat of the day, preventing it from radiating away into space at night. This heat balance, together with the rotation of the earth, propels the mighty ocean currents and the great rivers of air which determine what kind of a day it is today, and how it might change tomorrow.

Man is experimenting with this basic knowledge in new, ingenious ways. For example, both the U.S. and the Soviet Union are trying to put the free energy from the sun to work for them. One plan to reclaim frozen areas involves sprinkling sunlight-absorbing soot over snow-covered lands. They hope the resulting thaw will eventually permit productive agricultural use of such plateaus.

In a world where water is becoming the most precious mineral, control of the moisture balance between air, land, and sea becomes more and more important. The U.S. Geological Survey’s experimental laboratory in Denver, Colo., is using a harmless, tasteless chemical film (hexadecanol, a substance also found in ladies’ lipstick) that actually can seal in bodies of water to reduce evaporation.

If it could be done on a large scale, this would deprive adjacent land areas of rain. Other chemicals might be used for the opposite effect: By speeding evaporation, rainfall could be increased.

There has been much speculation about using hydrogen bombs to break up hurricanes. But the weather experts now think they have better ways to fight the fury of the winds. Sometime during the hurricane season this coming summer, the U. S. Weather Bureau may attempt to divert a hurricane away from the southeastern U. S. coast by using the heat updraft from massive patches of burning fuel oil poured on the sea at crucial points.

As for H-bombs, they may someday prove valuable in trimming mountaintops to redirect wind patterns. Atomic Energy Commission officials have hinted at such mammoth landscaping tasks for the radiation-free bombs it is trying to perfect. One early beneficiary of such a project might be smog-ridden Los Angeles;- if science could trim the surrounding mountains, a new wind pattern would sweep the smog away.

Some of today’s most spectacular weather-taming plans involve the Arctic and Antarctic iceboxes, principal breeding areas of the worlds cold fronts. Changes in the size and shape of the polar icecaps would have profound effects on the rest of the world. In the ultimate remodeling—say, the thawing of the north polar region—ocean levels would rise an estimated 40-100 feet, inundating New York, London, Le Havre, and other near sea-level ports.

Two methods to alter the polar packs have been discussed by would-be weather controllers: First, using scores of nuclear bombs to thaw some of the deep-ice areas in the Antarctic and, second, redirecting warm ocean currents—by dams, channels, or jetties—to reduce the Arctic’s ice fields.

The Russians have long been interested in the Arctic for strategic reasons and because so much of their territory borders the Arctic Circle. Dr. Harry Wexler, chief of research for the LI. S. Weather Bureau and a frequent polar visitor, gives this assessment of the Soviet efforts there to date: “They have been conducting big arctic expeditions since 1937. Literally they have covered the whole arctic basin within 100 miles of the North American continent. They make our own efforts look puny by comparison. They have clone excellent work in climatology, and in basic cloud physics, and have much greater facilities for studying weather.”

A confirmed believer in the feasibility of large-scale weather control perhaps in 20 or possibly fewer years, Orville says it “is essential to have some international cooperation in this field, possibly through the U.N.” Pending such agreement, however, he wants the U. S. second to none in weather knowledge.

U. S. Weather Bureau chief Francis W. Reichelderfer is all in favor of more money for such basic research but he also is convinced that a “crash” effort “will not give us the basic knowledge we need for a real weather program.”

Reichelderfer is supported in this warning by many meteorologists. Forecasting, for all the new rocket probes, radar plots, and electronic calculators, is still an imprecise science. Before man intervenes, for example, to increase solar radiation intake by blacking snow and speeding water evaporation, he must be sure what the over-all effects will be.

With imperfect knowledge, it is possible weather changes will boomerang on man, and his massive efforts to harness climate might instead initiate the return of the glaciers and a new Ice Age.

Despite this warning, the race to master weather—to make it a weapon—accelerates in the U.S. and the U.S.S.R.