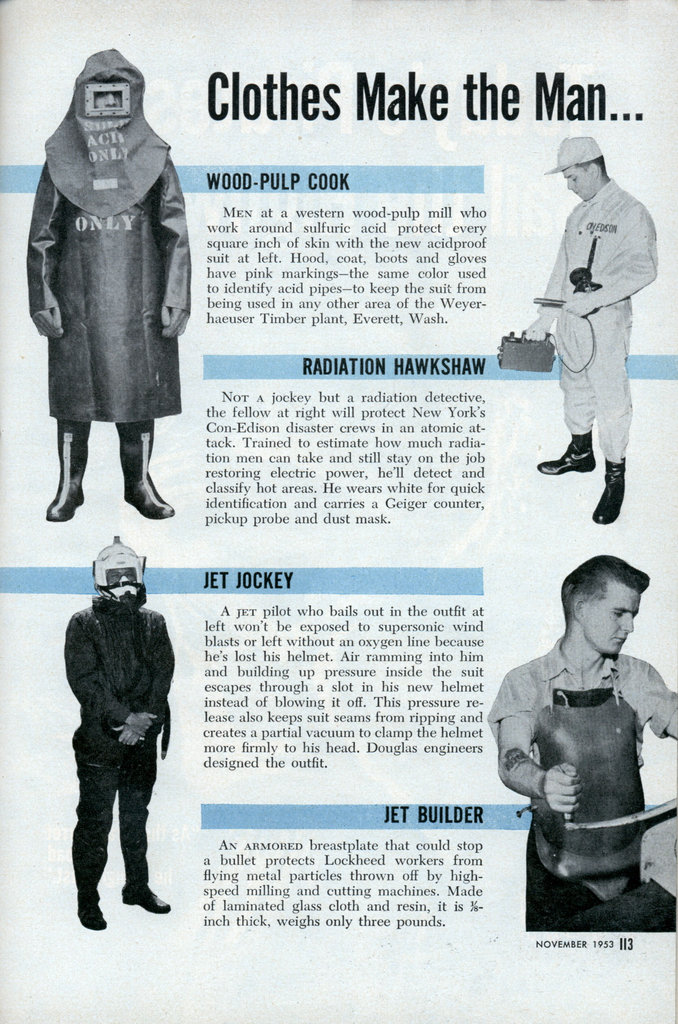 WOOD-PULP COOK
Men at a western wood-pulp mill who work around sulfuric acid protect every square inch of skin with the new acidproof suit at left. Hood, coat, boots and gloves have pink markings—the same color used to identify acid pipes—to keep the suit from being used in any other area of the Weyerhaeuser Timber plant, Everett, Wash.

RADIATION HAWKSHAW
Not a jockey but a radiation detective, the fellow at right will protect New York’s Con-Edison disaster crews in an atomic attack. Trained to estimate how much radiation men can take and still stay on the job restoring electric power, he’ll detect and classify hot areas. He wears white for quick identification and carries a Geiger counter, pickup probe and dust mask.

JET JOCKEY
A jet pilot who bails out in the outfit at left won’t be exposed to supersonic wind blasts or left without an oxygen line because he’s lost his helmet. Air ramming into him and building up pressure inside the suit escapes through a slot in his new helmet instead of blowing it off. This pressure release also keeps suit seams from ripping and creates a partial vacuum to clamp the helmet more firmly to his head. Douglas engineers designed the outfit.

JET BUILDER
Ax armored breastplate that could stop a bullet protects Lockheed workers from flying metal particles thrown off by highspeed milling and cutting machines. Made of laminated glass cloth and resin, it is 1/8-inch thick, weighs only three pounds.