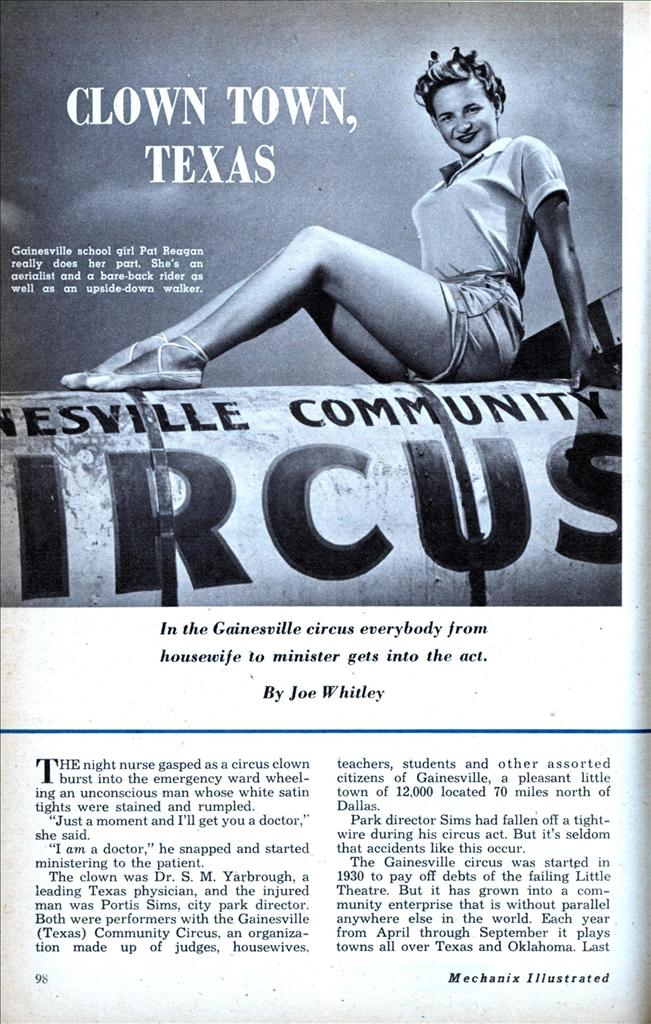 In the Gainesville circus everybody from housewife to minister gets into the act.

THE night nurse gasped as a circus clown burst into the emergency ward wheeling an unconscious man whose white satin tights were stained and rumpled.

“Just a moment and I’ll get you a doctor,” she said.

“I am a doctor,” he snapped and started ministering to the patient.

The clown was Dr. S. M. Yarbrough, a leading Texas physician, and the injured man was Portis Sims, city park director. Both were performers with the Gainesville (Texas) Community Circus, an organization made up of judges, housewives.

teachers, students and other assorted citizens of Gainesville, a pleasant little town of 12,000 located 70 miles north of Dallas.

Park director Sims had fallen off a tight-wire during his circus act. But it’s seldom that accidents like this occur.

The Gainesville circus was started in 1930 to pay off debts of the failing Little Theatre. But it has grown into a community enterprise that is without parallel anywhere else in the world. Each year from April through September it plays towns all over Texas and Oklahoma. Last season it traveled between four and five thousand miles, often outdrawing the largest professional shows. Sixty thousand once attended in Dallas and the 52,000 that turned out for a performance in Ft. Worth comprised the largest crowd ever gathered under a single roof in that city.

The aerial star who spins suspended from the big top by her teeth is Evelyn Kaps, a pretty high school student. Teaming with Dr. Yarbrough in the clown troupe are such unlikely circus types as A. G. Wells, mathematics professor, and the Reverend Johnstone Beech, rector of St. Paul’s Episcopal Church.

Profits go to buy new equipment and costumes and none of the members, who range from five to 70, are paid for performing. They are, however, amateurs only in the technical sense that they receive no salaries. They present most of the traditional and more difficult circus acts. A leading theatrical publication once reported that their performances compare favorably with those of the best professionals. Most of the feature acts, such as Pat Reagan (a teen-ager who walks upside down in small rings suspended from the top of the tent) have received sizable pro offers. Billy Rose once tried to hire the entire troupe for one of his productions. However, they prefer living at home and keep their performing strictly in the hobby class.

Nothing can stop the troupers from performing. A few years ago, while playing in Ardmore, Oklahoma, a cyclone destroyed their new big-top and damaged most of the equipment. The following day, however, they replaced everything. Then before the next performance, there was a virtual cloudburst. The tent sagged with the weight of the water and threatened to collapse. But the problem was solved when the ingenious Murrell put pails in place and the clowns punctured the roof. It was a little damp thereafter but the show went on.

During the years, the Gainesvillians have managed to work out a routine for carrying on normally both city and circus business in such a way that there is a minimum of interference on either side. One of the best examples of this happened a few years ago when the late County Judge Benjamin Franklin Mitchell was a member of the clown troupe.

The Judge was featured in an act in which he jumped from a burning house into a net held by the clown fire department. One night a clown dropped a corner of the net and the Judge broke three ribs. Justice didn’t suffer, though. For the next three weeks, the judge held court at his bedside at home. He returned to the Circus and to the courtroom the same week.

In fact, in Gainesville it’s practically impossible to get away from the circus. Half the homes in town have circus rigging in the backyards and you often see mother and daughter trying out new trapeze or tight-wire acts together while father and son are teaching the family dog to ride on the back of Junior’s pony.

Most citizens believe the circus has been the greatest asset Gainesville has ever had. Not only has it made the little city known all over the world but it has welded it into one of the most closely knit towns.

After all, when clergymen, policemen, city officials, teenagers and other citizens swing together on the flying trapeze there is bound to be mutual understanding of problems.