I honestly have no idea what the purpose of this piece is. Besides being incredibly racist, it doesn’t really seem to have a point. Is it supposed to be funny? And no, I didn’t leave any pages out. That’s the whole thing. 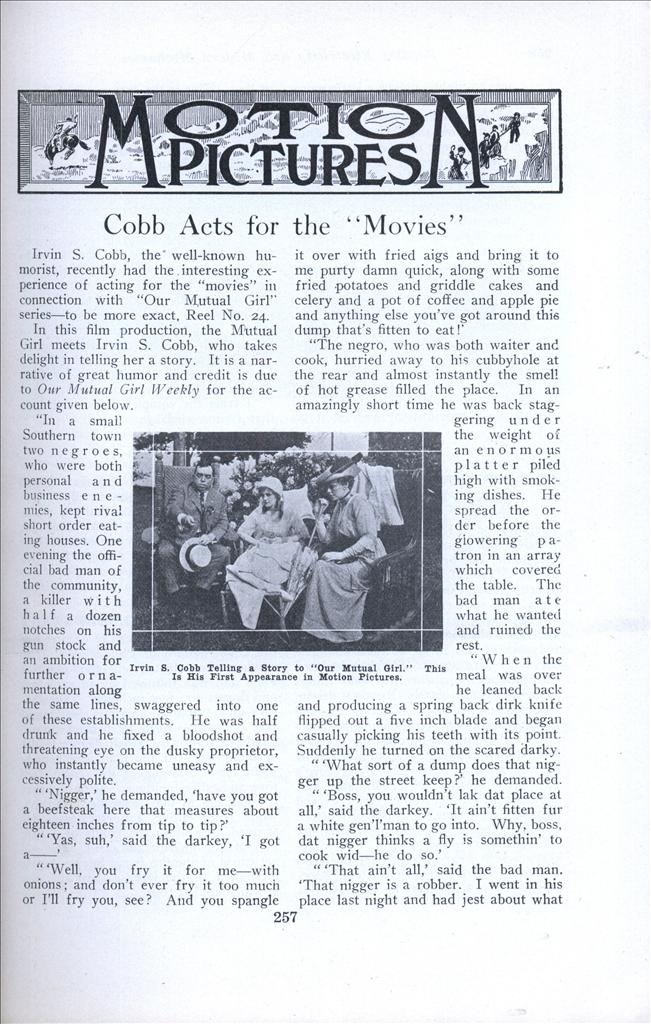 Cobb Acts for the “Movies”

Irvin S. Cobb, the” well-known humorist, recently had the. interesting experience of acting for the “movies” in connection with “Our Mutual Girl” series—to be more exact. Reel No. 24.

In this film production, the Mutual Girl meets Irvin S. Cobb, who takes delight in telling her a story. It is a narrative of great humor and credit is due to Our Mutual Girl Weekly for the account given below.

“In a small Southern town two negroes, who were both personal and business enemies, kept rival short order eating houses. One evening the official bad man of the community, a killer with half a dozen notches on his gun stock and an ambition for further ornamentation along the same lines, swaggered into one of these establishments. He was half drunk and he fixed a bloodshot and threatening eye on the dusky proprietor, who instantly became uneasy and excessively polite.

“‘Nigger,’ he demanded, ‘have you got a beefsteak here that measures about eighteen inches from tip to tip?’

“‘Well, you fry it for me—with onions; and don’t ever fry it too much or I’ll fry you, see? And you spangle it over with fried aigs and bring it to me purty damn quick, along with some fried potatoes and griddle cakes and celery and a pot of coffee and apple pie and anything else you’ve got around this dump that’s fitten to eat!’

“The negro, who was both waiter and cook, hurried away to his cubbyhole at the rear and almost instantly the smell of hot grease filled the place. In an amazingly short time he was back staggering under the weight of an enormous platter piled high with smoking dishes. He spread the order before the glowering patron in an array which covered the table. The bad man ate what he wanted and ruined the rest.

“When the meal was over he leaned back and producing a spring back dirk knife flipped out a five inch blade and began casually picking his teeth with its point. Suddenly he turned on the scared darky.

“‘What sort of a dump does that nigger up the street keep?’ he demanded.

“‘Boss, you wouldn’t lak dat place at all,’ said the darkey. ‘It ain’t fitten fur a white gen’l’man to go into. Why, boss, dat nigger thinks a fly is somethin’ to cook wid-—he do so.’

“‘That ain’t all,’ said the bad man. ‘That nigger is a robber. I went in his place last night and had jest about what I had here to-night—maybe a lettle more, maybe a lettle less. And when I got through I asked him what his bill was, and do you know that black pirate had the nerve to charge me a quarter ? Yes, sir, a whole quarter of a dollar! Of course I oughter killed him. That’s what I oughter done—jest killed him on the spot. But something stayed my hand. All I done was jest to cut off both his ears with this here knife and throw ’em in his face.’

Mr. Irvin S. Cobb on being interviewed about his appearance in the film, made the following remark concerning how to act:

“To beginners I would say that when engaged in being a movie actor it is well just to be a movie actor and let it go at that. This is, the system which I pursued. I began by demanding the center of the picture. I believe this is customary among the veterans of the profession. I insisted that all the other performers so favored as to be permitted to appear in the same film with me should take the background and make themselves as unobtrusive and inconspicuous as possible. This also I understand to be the standing rule among those actively engaged in the business. Finally I made a point of requiring that my picture should be featured on all advertising, lithographing and other printed matter and that my name should appear in letters not less than eighteen inches high and correspondingly broad. Wherever possible I favored red letters. In short, I endeavored to act as nearly as possible like a regular movie actor.

“I trust the completed film will show that I succeeded.”