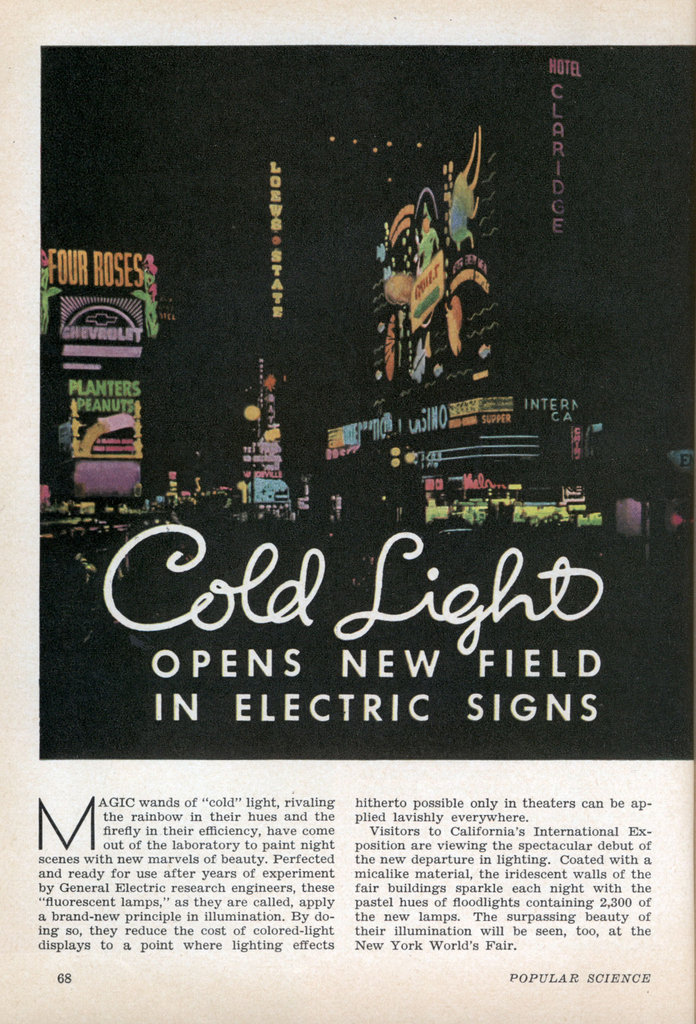 MAGIC wands of “cold” light, rivaling the rainbow in their hues and the firefly in their efficiency, have come out of the laboratory to paint night scenes with new marvels of beauty. Perfected and ready for use after years of experiment by General Electric research engineers, these “fluorescent lamps,” as they are called, apply a brand-new principle in illumination. By doing so, they reduce the cost of colored-light displays to a point where lighting effects hitherto possible only in theaters can be applied lavishly everywhere.

Visitors to California’s International Exposition are viewing the spectacular debut of the new departure in lighting. Coated with a mica like material, the iridescent walls of the fair buildings sparkle each night with the pastel hues of floodlights containing 2,300 of the new lamps. The surpassing beauty of their illumination will be seen, too, at the New York World’s Fair.

Much as an artist mixes paint, lighting specialists can combine these tubes of glowing color, in an endless variety of patterns and hues. They open a new field in electric signs, from the most modest in size to the monster “spectaculars” of districts like New York’s Great White W8.Y. Employed for decorative colored lighting of every description, the rainbow lamps will find striking uses in homes, stores, offices, hotels, theaters, and railway cars.

The secret of the new fluorescent lamp, a glass tube eighteen inches to a yard long, lies in a snow-white inner coating of powdered chemicals. When the current is turned on, these chemicals glow or “fluoresce,” like luminous paints used in theatrical effects, under the bombardment of ultra-violet rays produced by a trace of mercury vapor in the tube. So efficiently does this scheme work that the fluorescent lamps emit from fifty to 200 times as much light as incandescent bulbs of similar colors. The amount of current that they waste in the form of heat is negligible, compared with ordinary lamp bulbs and neon-type signs.

At present, the tubes are available in five colors-green, blue, pink, gold, and red. All except the last two, which employ tinted glass, appear colorless until lighted. Their hues depend upon’ the particular chemicals used in the coating for the insides of the tubes. “White” and “daylight” tubes also are obtainable, the first matching the warm shade of ordinary artificial light. The “daylight” shade, obtained by a skillful blend of powders, is declared to be man’s closest approach to natural light. It finds widespread use in displaying colored fabrics, making colored drawings, and inspecting factory products.

Except for sockets of corresponding design, and a compact switch with a built-in coil for controlling the current, no special equipment or wiring is needed for the fluorescent lamps. Consuming from fifteen to thirty watts apiece, they operate either on house current or from commercial power lines of higher voltage. With proper handling, they are said to have a longer life than incandescent bulbs.

Chemists share with electrical experts the credit for bringing the fluorescent lamp from its first experimental form (P.S.M., June ’36, p. 41) to its present practical one. Rare ores originally were the only available source of the required “phosphors” or luminous chemicals, and one batch might glow while others mysteriously failed. Then the experimenters found that many fluorescent minerals, such as zinc sulphide, calcium tungstate, and the silicates of zinc and cadmium, needed traces of certain metallic impurities to’ make them work. Applying this discovery, and using electric furnaces that subject the ingredients to terrific heat, skilled chemists now manufacture synthetic phosphors that excel nature’s best ones for use in the new lamps.