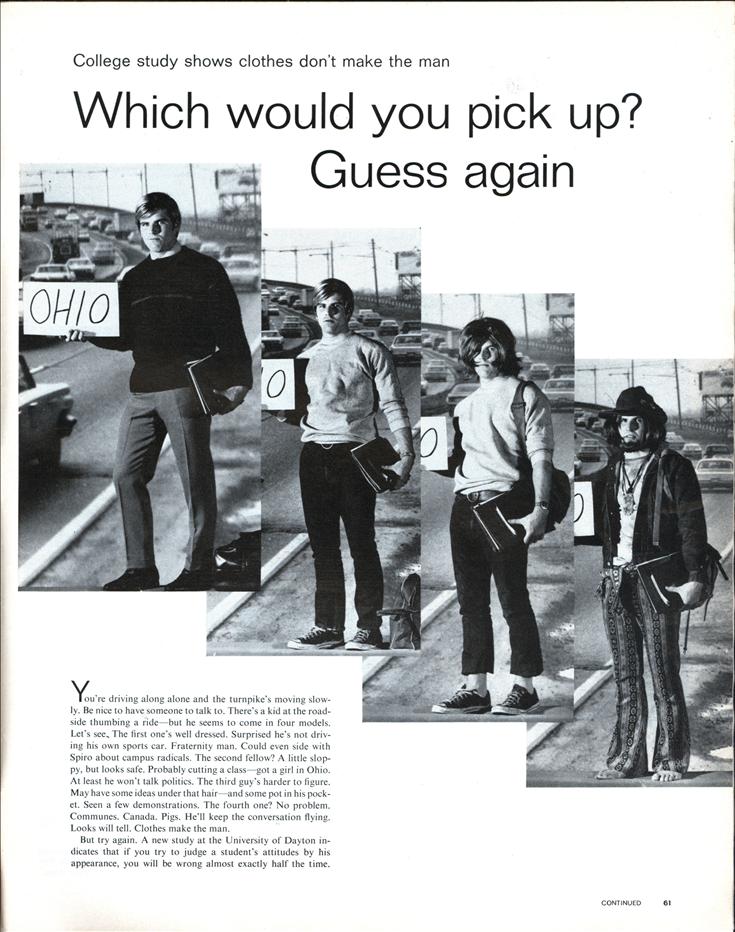 Which would you pick up? Guess again

You’re driving along alone and the turnpike’s moving slowly. Be nice to have someone to talk to. There’s a kid at the roadside thumbing a ride—but he seems to come in four models. Let’s see. The first one’s well dressed. Surprised he’s not driving his own sports car. Fraternity man. Could even side with Spiro about campus radicals. The second fellow? A little sloppy, but looks safe. Probably cutting a class—got a girl in Ohio. At least he won’t talk politics. The third guy’s harder to figure. May have some ideas under that hair—and some pot in his pocket. Seen a few demonstrations. The fourth one? No problem. Communes. Canada. Pigs. He’ll keep the conversation flying. Looks will tell. Clothes make the man.

But try again. A new study at the University of Dayton indicates that if you try to judge a student’s attitudes by his appearance, you will be wrong almost exactly half the time.

Tie Dayton study was conducted by Anthropologist John Bregenzer, who began it when he joined the Dayton faculty in 1968. Bregenzer categorized more than 200 students like those at right according to four basic styles of college dress —ranging from well-dressed to hippie—and ran them through a battery of political and psychological tests. At first, his idea was just to “sound out” the campus. Then he got more involved in his project last summer when he went to the movie Easy Rider and watched the solid country folk slaughter two young motorcyclists just because they had far-out costumes and long hair. This goes to show, says Bregenzer, “how people are overpredicting—grabbing hold of the radical dress style and just assuming that whoever dresses that way will think radically. That’s just not valid.”

Bregenzer uses his statistics to prove his point. Hippies, as a group, he says, were indeed the most politically radical. But there were so many aberrations, such as hippie-haired right-wingers and screaming radicals in three-piece suits, that the chances are only slightly better than even money (54%) that one can predict a student’s politics by looking at him. What the student chooses to look like has far more to do with who his family, friends and heroes are—and he may not even share their values. Other variables weaken the parallel between the student’s looks and attitudes. Some can’t afford good clothes. Others use long hair and whiskers more to hide weak chins and elephant ears than to express political outlook.