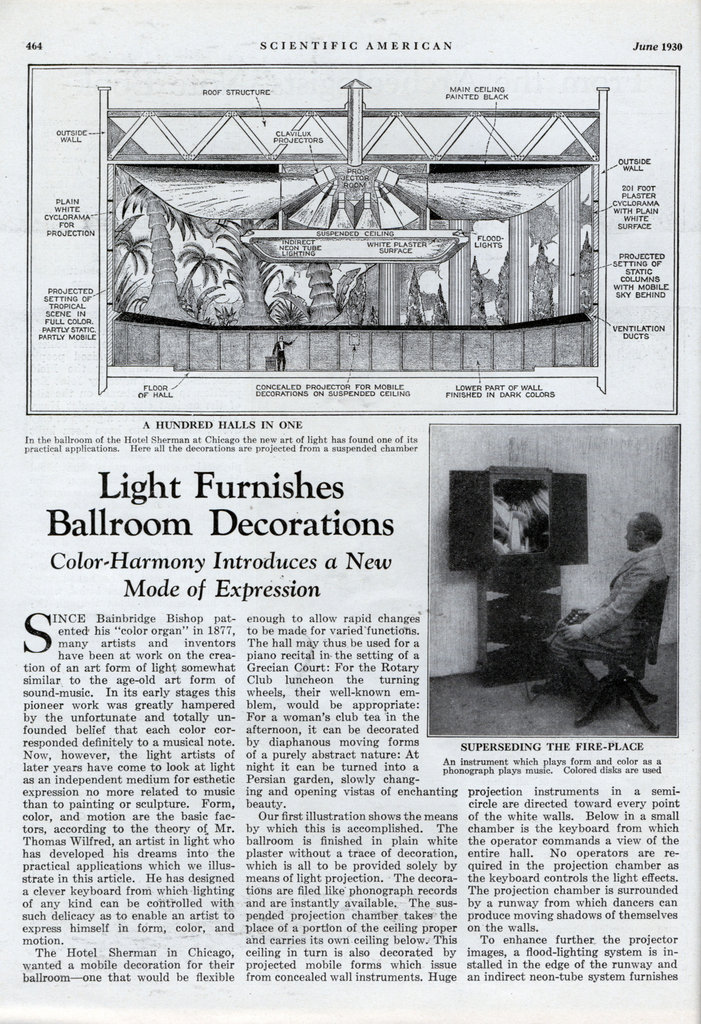 SINCE Bainbridge Bishop patented his “color organ” in 1877, many artists and inventors have been at work on the creation of an art form of light somewhat similar to the age-old art form of sound-music. In its early stages this pioneer work was greatly hampered by the unfortunate and totally unfounded belief that each color corresponded definitely to a musical note. Now, however, the light artists of later years have come to look at light as an independent medium for esthetic expression no more related to music than to painting or sculpture. Form, color, and motion are the basic factors, according to the theory of Mr. Thomas Wilfred, an artist in light who has developed his dreams into the practical applications which we illus-strate in this article. He has designed a clever keyboard from which lighting of any kind can be controlled with such delicacy as to enable an artist to express himself in form, color, and motion.

The Hotel Sherman in Chicago, wanted a mobile decoration for their ballroomâ€”one that would be flexible enough to allow rapid changes to be made for varied functions. The hall may thus be used for a piano recital in the setting of a Grecian Court: For the Rotary Club luncheon the turning wheels, their well-known emblem, would be appropriate: For a woman’s club tea in the afternoon, it can be decorated by diaphanous moving forms of a purely abstract nature: At night it can be turned into a Persian garden, slowly changing and opening vistas of enchanting beauty.

Our first illustration shows the means by which this is accomplished. The ballroom is finished in plain white plaster without a trace of decoration, which is all to be provided solely by means of light projection. The decorations are filed like phonograph records and are instantly available. The suspended projection chamber takes the place of a portion of the ceiling proper and carries its own ceiling below. This ceiling in turn is also decorated by projected mobile forms which issue from concealed wall instruments. Huge projection instruments in a semicircle are directed toward every point of the white walls. Below in a small chamber is the keyboard from which the operator commands a view of the entire hall. No operators are required in the projection chamber as the keyboard controls the light effects. The projection chamber is surrounded by a runway from which dancers can produce moving shadows of themselves on the walls.

To enhance further the projector images, a flood-lighting system is installed in the edge of the runway and an indirect neon-tube system furnishes light on the suspended ceiling. The true ceiling is not seen, as it is painted black and no light is projected on it, which would differentiate it from the false or suspended ceiling. The effect is that of a vast cyclorama, but the true surface is entirely obliterated by means of the three-dimensional projecting system used. The illusion of three dimensions is achieved by utilizing a new principle of optics. One of the effects which can be obtained, for example, is a tropical forest. Through the spaces between huge tree trunks can be seen vistas of tropical undergrowth, flowers, sky, and water, constantly moving and changing in form and color. A cathedral with sunlight streaming in through a number of stained glass windows is another possibility. Using pure decoration, the entire hall may be covered with abstract forms apparently in three dimensions, rhythmically advancing and receding. Or there may be a modern city with a semi-abstract treatment of towers, cranes, girders, and bridges, swinging and moving. Or, at the operator’s fancy, there can be an oriental fantasy suggesting the “thousand and one nights” with movements of festoons of large jewels among minarets and crystal towers.

MUCH poetry has been inspired by the fire-place of yore, which has now been largely replaced by the uninspiring steam radiator or the unconvincing gas-log. The charms of story telling around the fire is as extinct as the dodo and the electric bulb has inspired no poetic muse. However, we may now take the very bulb and make it speak eloquently of the “stuff that dreams are made of” by a new instrument for home use. All one does is to open the doors which mask a curved screen, select a record from the drawer, take the tiny keyboard in his lap and the world of make-believe is his. Colored glass records rotating at different

speeds are used to allow the lights to be projected onto a screen background lighted from above with the three primary colors from minature floodlights controlled by the player. Eleven buttons enable the player to modify the forms and colors projected through the slowly moving record to increase or decrease the tempo at will, or “freeze” any transitory form which appeals to the fancy, as long as desired.

These cabinets can be designed to fit the architectural or decorative scheme of the room. They take up no more space than the modern phonograph or radio set. They are self-contained and all you need is to connect to an outlet, as with any other electrical device. The effect when seen for the first time is remarkable. You can give a home “color recital”with it.

With our noise-racked nerves, it would seem logical to seek recreation through silent beauty. We might even visualize, with Mr. Wilfred, large temples of light where people can find a place of silence with light as the only language of beauty.