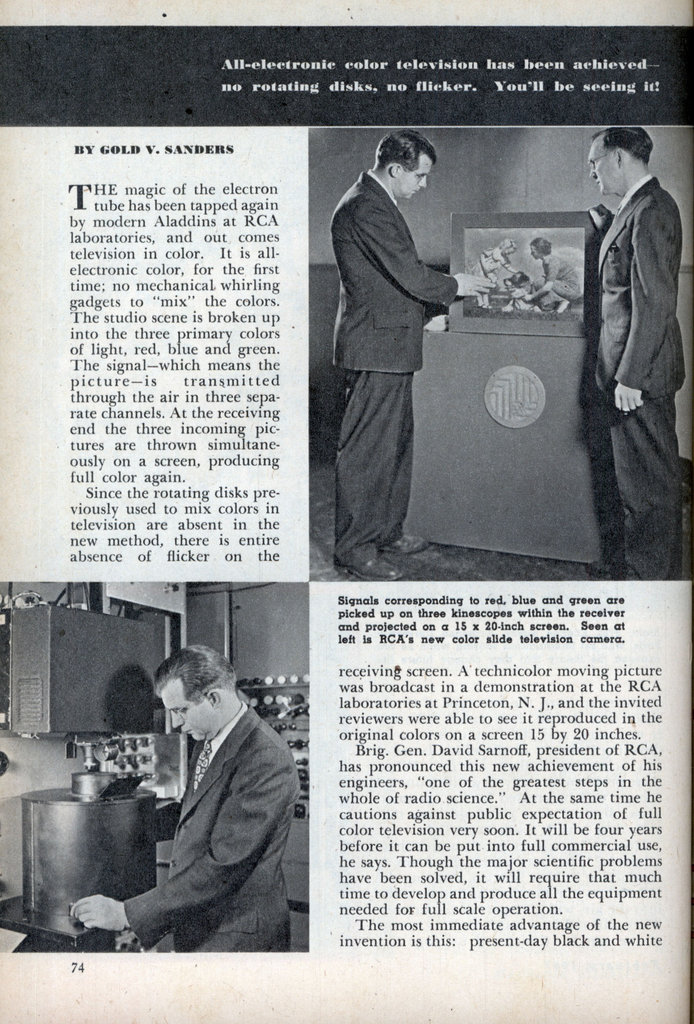 All-electronic color television has been achievedâ€” no rotating disks, no flicker. You’ll be seeing it!

THE magic of the electron tube has been tapped again by modern Aladdins at RCA laboratories, and out comes television in color. It is all-electronic color, for the first time; no mechanical whirling gadgets to “mix” the colors. The studio scene is broken up into the three primary colors of light, red, blue and green. The signalâ€”which means the pictureâ€”is transmitted through the air in three separate channels. At the receiving end the three incoming pictures are thrown simultaneously on a screen, producing full color again.

Since the rotating disks previously used to mix colors in television are absent in the new method, there is entire absence of flicker on the receiving screen. A technicolor moving picture was broadcast in a demonstration at the RCA laboratories at Princeton, N. J., and the invited reviewers were able to see it reproduced in the original colors on a screen 15 by 20 inches.

Brig. Gen. David Sarnoff, president of RCA, has pronounced this new achievement of his engineers, “one of the greatest steps in the whole of radio science.” At the same time he cautions against public expectation of full color television very soon. It will be four years before it can be put into full commercial use, he says. Though the major scientific problems have been solved, it will require that much time to develop and produce all the equipment needed for full scale operation.

The most immediate advantage of the new invention is this: present-day black and white equipment may be developed and expanded fully without fear of obsolescence. This is because the receivers now in use can also be employed to receive all-electronic color broadcastsâ€”but only in black and white. The green signal of the RCA type of color transmission reproduces as black and white on these sets when they are equipped with a relatively cheap frequency converter.

This would be like a color-blind person viewing a Technicolor movie. He would get perfectly satisfactory entertainment, even though he could not see the colors the others were seeing. But in order to receive full color television, when it is available, owners of these black and white receivers will have to buy new sets.

The RCA color system employs three filters to separate the primary colors of the image to be broadcast, just as is done with mechanical color broadcasting. The green filter passes only those parts of the picture that have green in them, and the red and blue filters do similarly for red and blue. Since all colors are made up of these three primary colors of light, all visible colors can be broadcast and received.

Where the RCA method departs entirely from others is in the broadcasting technique. Three separate frequencies are employed, one for each of the three primary colors. The moving picture, studio play, or whatever image is to be transmitted, is broken up into these three parts by a system of color-selecting mirrors and photocells that convert it to electric impulses.

In the receiver, three kinescope tubes pick up the three individual color signals, all of which arrive on time, perfectly synchronized. Cathode ray projection tubes project all of them on the receiving screen through three lenses, forming the complete image.