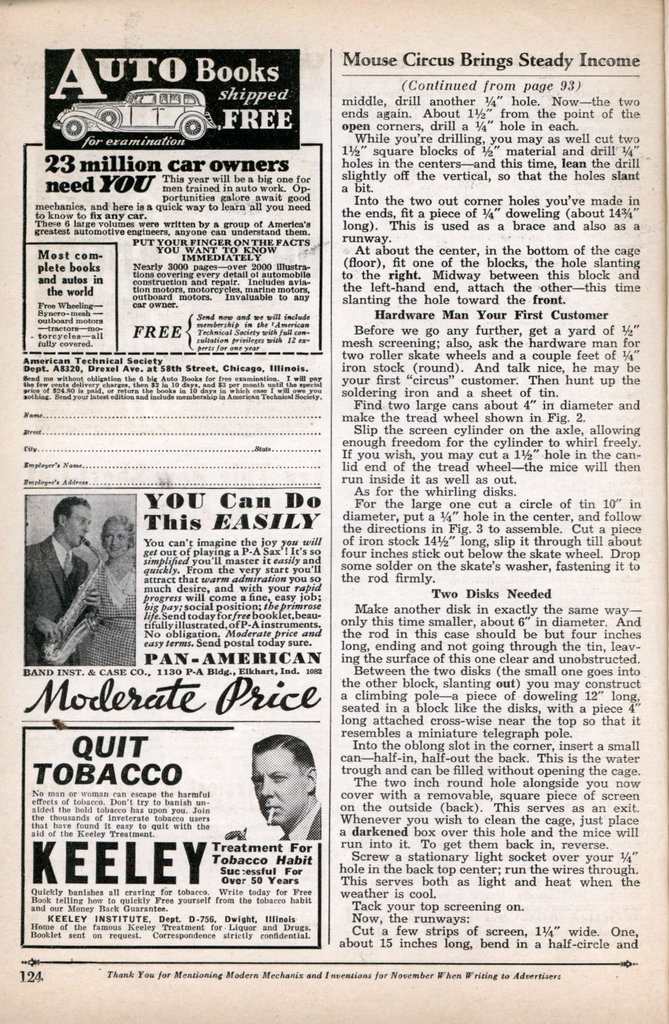 Troupe of little mice cavorting about in this freak circus displayed in merchant’s windows will attract huge crowds of passers-byâ€”and net one a neat profit.

HERE is a money-making idea that is worth at least five hundred dollars of any man’s money. It is a veritable gold mine for any man who has even the tiniest spark of mechanical ingenuityâ€”and it has been thoroughly tested and proven as a cash-getter.

Its usefulness is in creating a window attraction for stores in all lines of business. Two days’ trial on merit will convince any of ’em.

Its cost is slightly over two dollars per circus, and each circus rents for a minimum of three dollars per week to merchants. Upkeep is practically nil.

With a dozen or more circuses established in down-town stores, they will afford anyone a regular pre-depression, boom-time salary. And the best part of the whole thing is that they advertise themselvesâ€” create new demands!

Lack of space does not permit us to tell here of the insane, side-splitting performances these rodents put onâ€”but a glimpse of the crowds that flock around windows where they are would tell you plenty.

And this is no sales talk, it is pure, unadulterated facts, and has been successfully tried in St. Louis by an ex-automobile mechanic, who found himself without employment and hit upon the idea.

The circus itself is simple in construction, as shown in accompanying drawings.

Exactly in the center of the right-hand end, drill a 1/4″ hole. In the back, near one corner, make another hole about 2″ in diameter. Directly in the corner, (both these latter holes should be near the floor) cut a square hole about 2-1/2″xl-1/2″. Near the top, also on the back, and near the middle, drill another 1/4″ hole. Nowâ€”the two ends again. About 1-1/2″ from the point of the open corners, drill a 1/4′ hole in each.

While you’re drilling, you may as well cut two 1-1/2″ square blocks of 1/2″ material and drill 1/4″ holes in the centersâ€”and this time, lean the drill slightly off the vertical, so that the holes slant a bit.

At about the center, in the bottom of the cage (floor), fit one of the blocks, the hole slanting to the right. Midway between this block and the left-hand end, attach the otherâ€”this time slanting the hole toward the front.

Before we go any further, get a yard of 1/2″ mesh screening; also, ask the hardware man for two roller skate wheels and a couple feet of 1/4″ iron stock (round). And talk nice, he may be your first “circus” customer. Then hunt up the soldering iron and a sheet of tin.

Find two large cans about 4″ in diameter and make the tread wheel shown in Fig. 2.

Slip the screen cylinder on the axle, allowing enough freedom for the cylinder to whirl freely. If you wish, you may cut a 1-1/2″ hole in the can-lid end of the tread wheelâ€”the mice will then run inside it as well as out.

As for the whirling disks.

For the large one cut a circle of tin 10″ in diameter, put a 1/4″ hole in the center, and follow the directions in Fig. 3 to assemble. Cut a piece of iron stock 14-1/2″ long, slip it through till about four inches stick out below the skate wheel. Drop some solder on the skate’s washer, fastening it to the rod firmly.

Make another disk in exactly the same wayâ€” only this time smaller, about 6″ in diameter. And the rod in this case should be but four inches long, ending and not going through the tin, leaving the surface of this one clear and unobstructed.

Between the two disks (the small one goes into the other block, slanting out) you may construct a climbing poleâ€”a piece of doweling 12″ long, seated in a block like the disks, with a piece 4″ long attached cross-wise near the top so that it resembles a miniature telegraph pole.

Into the oblong slot in the corner, insert a small canâ€”half-in, half-out the back. This is the water trough and can be filled without opening the cage.

The two inch round hole alongside you now cover with a removable, square piece of screen on the outside (back). This serves as an exit. Whenever you wish to clean the cage, just place a darkened box over this hole and the mice will run into it. To get them back in, reverse.

Screw a stationary light socket over your 1/4″ hole in the back top center; run the wires through. This serves both as light and heat when the weather is cool.

Tack your top screening on.

Cut a few strips of screen, l-1/4″ wide. One, about 15 inches long, bend in a half-circle and tack between the tread-wheel and the larger disk â€”allow it to reach just below the end of the cylinder’s axle. It should run from the back of the cage, outward.

Cut some more and run them around the back and other end of the cage, about half-way between the top and bottom. Give them plenty of ups and downsâ€”don’t have them straight. Small finishing nails, aided by a few drops of solder, will hold the walk in place.

Another half-circle about 17″ long, loop up and over the smaller diskâ€”in a direction longwise to the cage, on the front side of the disk. Directly in front of this disk make a short step (5″ high) with enough bent over for them to step on and jump from.

Hang a few short pieces of runway from the top of the cage attached to the screen there with wire so as to swing freely.

Slide your glass into its groovesâ€”sprinkle some sawdust on the floor and it’s finished.

Now about the mice. The St. Louis gentleman catches all his own in live-traps, claiming that the ordinary house or field variety of mouse is more suitable for such gymnastics. He puts his traps in convenient restaurants, bakeries, vacant lots, etc., even in his own cellar. He feeds them, daily, such things as ripe corn, wheat, raw potatoes, bread, cheese, bits of bacon, and an occasional corn cob. The cages he cleans once a week. About 12 to 16 mice to a cage give best results, he says.

However, if you do not wish to take the trouble of catching your own, authorities on the subject say that white mice, which you can purchase at any pet shop, give the same results. But remember to get miceâ€”not rats!

Either way, you are certain of creating a sensation with your wild, hilarious mouse circusâ€” and, incidentally, a bankroll!