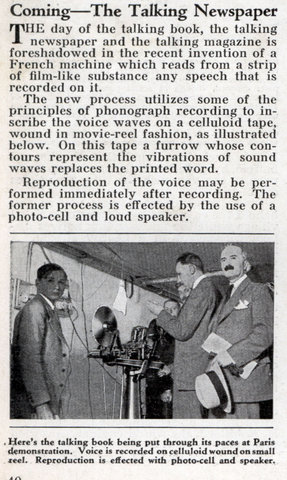 THE day of the talking book, the talking newspaper and the talking magazine is foreshadowed in the recent invention of a French machine which reads from a strip of film-like substance any speech that is recorded on it.

The new process utilizes some of the principles of phonograph recording to inscribe the voice waves on a celluloid tape, wound in movie-reel fashion, as illustrated below. On this tape a furrow whose contours represent the vibrations of sound waves replaces the printed word.
Reproduction of the voice may be performed immediately after recording. The former process is effected by the use of a photo-cell and loud speaker.