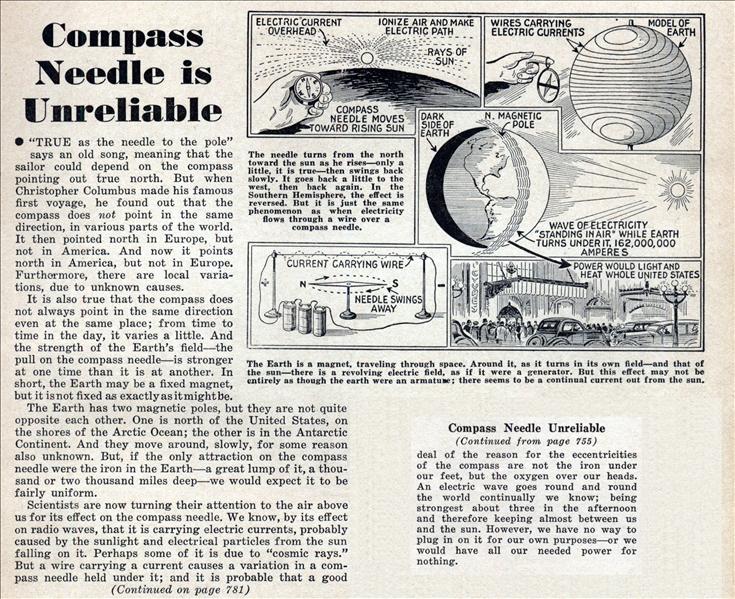 “TRUE as the needle to the pole”

says an old song, meaning that the sailor could depend on the compass pointing out true north. But when Christopher Columbus made his famous first voyage, he found out that the compass does not point in the same direction, in various parts of the world. It then pointed north in Europe, but not in America. And now it points north in America, but not in Europe. Furthermore, there are local variations, due to unknown causes.

It is also true that the compass does not always point in the same direction even at the same place; from time to time in the day, it varies a little. And the strength of the Earth’s field—the pull on the compass needle—is stronger at one time than it is at another. In short, the Earth may be a fixed magnet, but it is not fixed as exactly as it might be.

The Earth has two magnetic poles, but they are not quite opposite each other. One is north of the United States, on the shores of the Arctic Ocean; the other is in the Antarctic Continent. And they move around, slowly, for some reason also unknown. But, if the only attraction on the compass needle were the iron in the Earth—a great lump of it, a thousand or two thousand miles deep—we would expect it to be fairly uniform.

Scientists are now turning their attention to the air above us for its effect on the compass needle. We know, by its effect on radio waves, that it is carrying electric currents, probably caused by the sunlight and electrical particles from the sun falling on it. Perhaps some of it is due to “cosmic rays.” But a wire carrying a current causes a variation in a compass needle held under it; and it is probable that a good deal of the reason for the eccentricities of the compass are not the iron under our feet, but the oxygen over our heads. An electric wave goes round and round the world continually we know; being strongest about three in the afternoon and therefore keeping almost between us and the sun. However, we have no way to plug in on it for our own purposes—or we would have all our needed power for nothing.