COMPUTERS THAT ARE REALLY PORTABLE (Mar, 1982)

Check out the predictions at the end of the article. 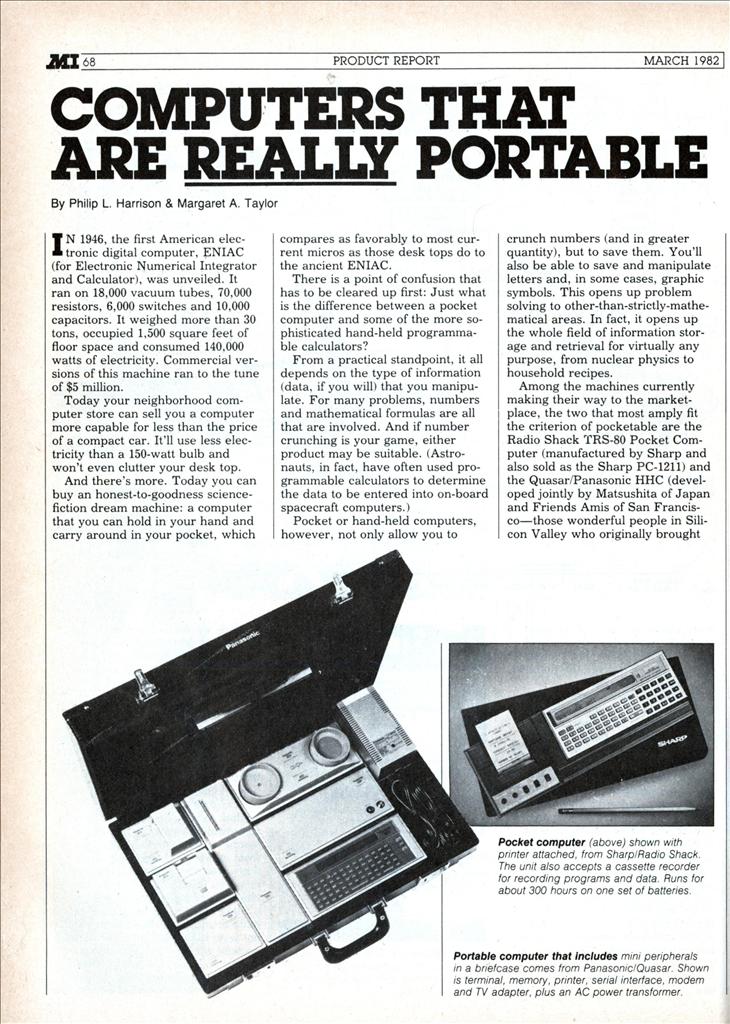 COMPUTERS THAT ARE REALLY PORTABLE

IN 1946, the first American electronic digital computer, ENIAC (for Electronic Numerical Integrator and Calculator), was unveiled. It ran on 18,000 vacuum tubes, 70,000 resistors, 6,000 switches and 10,000 capacitors. It weighed more than 30 tons, occupied 1,500 square feet of floor space and consumed 140,000 watts of electricity. Commercial versions of this machine ran to the tune of $5 million.

Today your neighborhood computer store can sell you a computer more capable for less than the price of a compact car. It’ll use less electricity than a 150-watt bulb and won’t even clutter your desk top.

And there’s more. Today you can buy an honest-to-goodness science-fiction dream machine: a computer that you can hold in your hand and carry around in your pocket, which compares as favorably to most current micros as those desk tops do to the ancient ENIAC.

There is a point of confusion that has to be cleared up first: Just what is the difference between a pocket computer and some of the more sophisticated hand-held programmable calculators?

From a practical standpoint, it all depends on the type of information (data, if you will) that you manipulate. For many problems, numbers and mathematical formulas are all that are involved. And if number crunching is your game, either product may be suitable. (Astronauts, in fact, have often used programmable calculators to determine the data to be entered into on-board spacecraft computers.) Pocket or hand-held computers, however, not only allow you to crunch numbers (and in greater quantity), but to save them. You’ll also be able to save and manipulate letters and, in some cases, graphic symbols. This opens up problem solving to other-than-strictly-mathematical areas. In fact, it opens up the whole field of information storage and retrieval for virtually any purpose, from nuclear physics to household recipes.

Among the machines currently making their way to the marketplace, the two that most amply fit the criterion of pocketable are the Radio Shack TRS-80 Pocket Computer (manufactured by Sharp and also sold as the Sharp PC-1211) and the Quasar/Panasonic HHC (developed jointly by Matsushita of Japan and Friends Amis of San Francisco—those wonderful people in Silicon Valley who originally brought you the Atari video games and the Craig/Quasar/Panasonic language translator).

These computers are versatile tools that can put cheap but powerful and useful computing capability into the hands of everyone. And, while patience is a virtue in learning to operate these hand-held marvels, you don’t have to be an Einstein to figure out how they work or a mathematician/engineer to make practical use of them.

Lightest in weight (a mere 6 ounces) and least expensive (at $229.95), the Radio Shack/Sharp pocketable is the first to have come out in mass distribution.

The computer is just under 7 inches long, less than 3 inches wide and about 3A inch thick. It has a standard typewriter-format alphabetic keyboard with seven additional special-function keys. Twenty numerical and other notation keys are arranged for calculator-type convenience.

The Radio Shack/Sharp computer has a 24-character dot-matrix liquid-crystal display that can be automatically scrolled if a line is longer than 24 characters. Its workings include UK bytes of ROM (read-only memory) and just under 1.5K bytes of user-available BASIC programmable RAM (random-access memory).

Four mercury batteries (nonrechargeable) give a life of 300 hours. Additionally, a small amount of power remains on at all times— even when the unit itself is switched off—to protect the memory (and whatever data you have put into it).

When the display indicates (via gradually fading characters) that it’s battery-replacement time, just pop out the old and stick in the new; a built-in capacitor retains the electrical charge for about a minute, allowing the batteries to be replaced without losing anything in memory.

Among other important features to note are a built-in edit and debug mode. For the computer novice, the edit mode allows you to easily correct or change your programs. The debug mode executes a program one line at a time, which is very valuable in determining where program problems exist since it enables you to follow the computer’s actions step by step.

Optional accessories (or peripherals, in tech talk) include a dot-matrix printer and a cassette interface for program and data storage. A nice touch is that this cassette-stored data can be accessed by your BASIC programs, which allows large amounts of data to be read or saved quickly.

Eleven ready-to-run cassette programs are available, including some that cover areas such as civil engineering, business, real estate, aviation and personal finance, along with a selection of games.

The Quasar/Panasonic pocket computer is the latest that technology has to offer and consequently the highest-priced pocketable (starting at $525).

In the 2K version, this would appear to make the HHC less powerful than the TRS-80/PC-1211, but there is more. Unlike the other machine, this hand-held wonder is expandable. Three slots in the back each hold optional 16K ROM capsules, allowing a total on-board capability of 64K bytes of application programs or data. External programmable RAM banks are available in 4K modules, each expandable to 8K, and up to six such modules can be attached to the HHC at any one time, for a total of 48K.

That’s a respectable amount of computing power even for a desktop micro. Of course, adding those external modules onto the HHC eliminates its hand-holdability, but the unit is still quite portable.

In fact, Quasar sells an attache case to go along with the HHC and its accessories which include, besides a dot-matrix printer and a cassette interface, an acoustical modem, color-TV adapter and an RS-232C interface.

The result is a hand-held computer that can tie into any of the popular telephone-line data banks (like The Source, CompuServe or Dow Jones) or carry on a discussion with your company’s big mainframe from anywhere in the world (even a public phone booth) or can interface— through the RS-232C—-with any of hundreds of other peripherals manufactured by scores of companies.

Power for all of this is handled through the HHC itself, which utilizes 12-hour rechargeable Ni-Cads that are good for up to 600 hours, depending on accessory control and programming applications. Only the color-TV adapter (which produces displays in eight colors) requires AC power.

Like the TRS-80/PC-1211, the HHC is on even when you’ve shut it off. This means that what you’ve placed in memory remains there until you decide to change it, even if you accidentally hit the Off key. The unit also has an automatic shutdown after about ten minutes of inactivity.

Among the HHC’s other advantages is a built-in real-time clock that allows you to use the unit as an electronic secretary to remind you of appointments and important future dates. It does this, regardless of what mode you’re in, with a musical tone. You may continue with whatever you were doing or acknowledge the tone and check the secretary files.

Additionally, all 65 keys on the keyboard can be redefined, virtually customizing the computer for any individual need.

About the only complaint of substance concerns the HHC’s editing and debug features. For starters, there are two different editing procedures, depending on whether it is a text (the kind you would put into the secretary) or a program file.

The program files are listed in two menus but can only be changed from one (the BASIC menu).

The text file editor is easy to use, but the BASIC file editor is complicated by the software’s inability to move backward through a program. On a regular computer, this would be no particular problem, but keep in mind that the HHC’s 24-character display—like the TRS-80/PC-1211— shows only one line at a time. And unless you personally have a real good memory, you’re out of luck.

This problem, however, can be greatly alleviated through the use of the TV hookup, since the HHC then displays 16 lines at a time.

Also, data entered into a text file is not accessible by the BASIC language. As such, your programs can’t obtain any information you’ve put in this file. More-sophisticated users can, however, access these text files by using a language called SNAP, which also is available with the HHC.

Since there seems to be no end in sight to computer miniaturization, a fond dream of science-fiction writers is rapidly becoming a reality. By the year 2000, there seems to be little doubt that you’ll be able to hold in the palm of your hand a computer as capable as the most powerful machines now on the planet.

Couple this with such technical abilities as modern satellite communications and it’s quite possible that the sum total knowledge of the human race could eventually be at the tip of your fingers.