Mechanix Illustrated
Issue: Feb, 1947
Posted in: Automotive, How to
3 Comments on Confessions of a Hot-Rod Jockey (Feb, 1947) 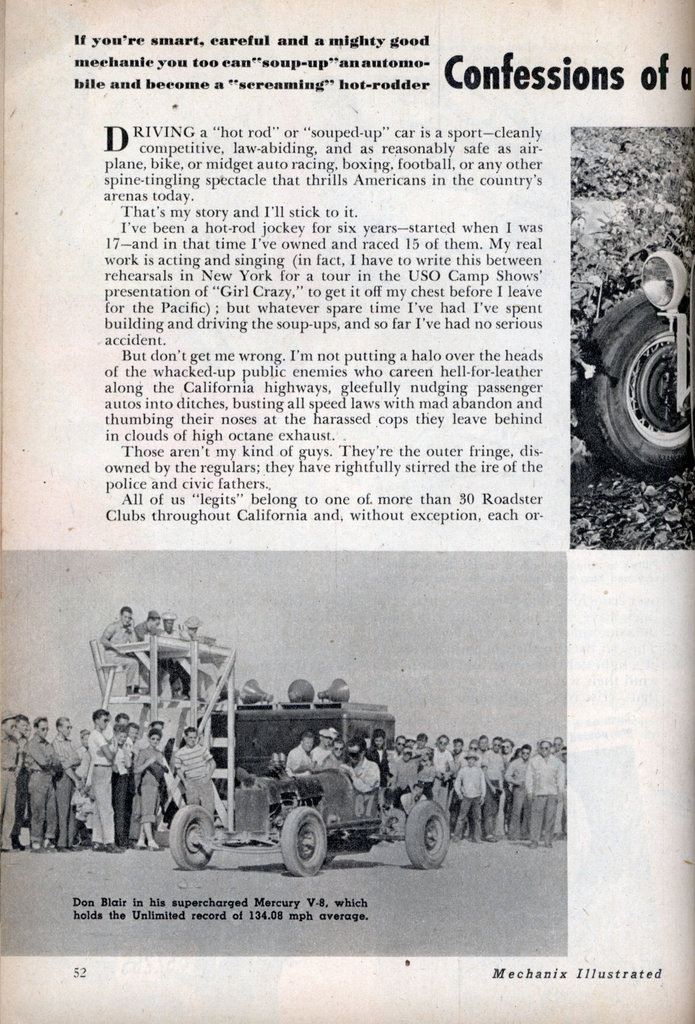 Confessions of a Hot-Rod Jockey

If you’re smart, careful and a mighty good mechanic you too can “soup-up” an automobile and become a “screaming” hot-rodder DRIVING a “hot rod” or “souped-up” car is a sport—cleanly competitive, law-abiding, and as reasonably safe as airplane, bike, or midget auto racing, boxing, football, or any other spine-tingling spectacle that thrills Americans in the country’s arenas today.

That’s my story and I’ll stick to it.

I’ve been a hot-rod jockey for six years—started when I was 17—and in that time I’ve owned and raced 15 of them. My real work is acting and singing (in fact, I have to write this between rehearsals in New York for a tour in the USO Camp Shows’ presentation of “Girl Crazy,” to get it off my chest before I leave for the Pacific) ; but whatever spare time I’ve had I’ve spent building and driving the soup-ups, and so far I’ve had no serious accident.

But don’t get me wrong. I’m not putting a halo over the heads of the whacked-up public enemies who careen hell-for-leather along the California highways, gleefully nudging passenger autos into ditches, busting all speed laws with mad abandon and thumbing their noses at the harassed cops they leave behind in clouds of high octane exhaust.

Those aren’t my kind of guys. They’re the outer fringe, disowned by the regulars; they have rightfully stirred the ire of the police and civic fathers.

All of us “legits” belong to one of more than 30 Roadster Clubs throughout California and, without exception, each organization clamps clown hard on all members who hold races on public highways or drive recklessly. Automatic expulsion is the penalty for all offenders.

The clubs have banded together and formed the Southern California Timing Association which sponsors speed tests over special courses and awards trophies and plaques to the fastest entries. The clubs observe all police regulations and race only in well-supervised meets.

There’s a world of difference between the intricately-constructed, dependable racers and the phony hot rods which zoom along the roads with little more than a prayer to insure the safety of the fellow behind the wheel. Right now we’re going all-out to put pressure on owners and builders of these cars to install hydraulic brakes, good shock absorbers and all safely devices to comply with police regulations and incidentally keep the drivers’ personal necks-intact.

Take a long look at some of the better hot rods and you will find that they meet the most rigid specifications for automotive safety. And most of the jockeys are earnest young guys, some years out of school, who are constantly experimenting in instructive engineering research. They are not speed-crazy jerks; they are smart mechanics to whom some of the improvements now in effect on commercial passenger cars can be directly traced.

And now let me take you to a typical hot rod speed test.

This one will take place at El Mirage, a dry lake in the Mojave Desert 98 miles from Hollywood. Actual timing starts at daybreak on Sunday, but by Friday hundreds of hot rodders are already on hand, whizzing along the five-mile lake bed in tests for engine bugs. On Saturday S. C. T. A. officials inspect the course and select the longest stretch with the fewest rough spots as the scene of the big show. They post red flags at intervals along the best one-mile stretch and the stage is set.

Comes dawn and more than 300 cars are in line. Thousands of spectators, rooters for the participants, rim the lake bed and stir with excitement as the first speedster rushes toward the straightaway. Timing begins when his front tires intercept the beam of an electric eye, and concludes when another eye a quarter-mile away automatically stops the timing apparatus. From the elapsed time over the measured distance the officials arrive at the speed in mph.

At the end of his run the driver makes a wide half-circle and comes back to the timing stand, where the judges hang a card with his time on the left door of his car. Back he goes, then, to the end of the line.

The first run is merely a test; on the second he must clock 115 mph to be eligible for a third. On the third he must hit 120, to remain, and so on, until the winners are determined in the various classes of cars competing.

In the Modified car class, a record of 133.03, also set by a Mercury V-8, still stands. To quality as a Modified, a racer must have at least 400 square inches as a vertical plane in the back. A 1926 Chevrolet four-cylinder engine, mounting twin carburetors, holds the record in the Streamliner class with a blistering 140.00. And in the Unlimited class, in which any type of engine is permitted, the mark is held by a Mercury V-8 which hit 144.08.

Take it from me, it’s not easy to build a car which can achieve these tremendous speeds. It takes many years of study, long hours of labor and lots of experimenting with fuels, gears, pistons, frames and what-not, not to mention heavy, repeated digging into one’s personal bank account. You see, no one makes any money out of hot-rodding. It’s strictly amateur, done for the fun of it, and the tab comes high.

A good fast hop-up costs roughly $1,500 to build, and some run as high as $3,000. The engine alone, according to the type and amount of equipment used, sets the driver back $850. The rest is used up in changes in stock frames, hydraulic brakes, painting, chroming and the like.

On the engine, he’s got to rebore his cylinders for additional piston displacement, port his block for greater fuel intake efficiency, regrind his cam shaft to alter valve timing and increase intake and exhaust duration, rebuild his ignition to insure the better spark needed with higher rpm and increased compression, replace his conventional fuel pump with one providing forced feed to the Carburetion system—and do lots more minor puttering.

Frame changes depend largely on the ingenuity of the builder and the equipment he can obtain, keeping in mind the lowering of the center of gravity as much as feasible. Higher steps, built into the front and rear of the frame by cutting and welding, can provide a drop of several inches. Channeling the body can provide probably all the drop needed, but this involves much fitting.

At normal speeds, the hot rods are amazingly good on fuel economy. A fast roadster averages anywhere from 20 to 30 miles on a gallon of 82-octane gasoline while breezing along at about 50 mph. The answer lies in high compression, high gearing and accurate timing, combined with the low weight of a car stripped for speed.

It’s a great sport, if you’re smart, careful and a darn good automobile mechanic. A real hot rodder is all three.