The test case they are referring to is of course Griswold v. Connecticut in which the Supreme Court ruled that the law violated a person’s right to privacy.

Of course there are still those, including the insufferable Rick Santorum (NSFW), a leading republican candidate for president who disagree with that ruling.

Fortunately Planned Parenthood is still around and could use your help in their good work.  Please consider donating today. 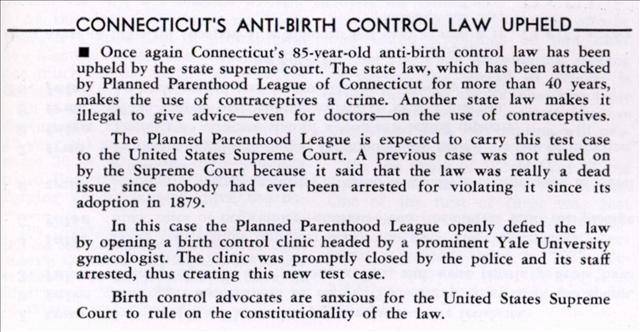 The Planned Parenthood League is expected to carry this test case to the United States Supreme Court. A previous case was not ruled on by the Supreme Court because it said that the law was really a dead issue since nobody had ever been arrested for violating it since its adoption in 1879.

In this case the Planned Parenthood League openly defied the law by opening a birth control clinic headed by a prominent Yale University gynecologist. The clinic was promptly closed by the police and its staff arrested, thus creating this new test case.

Birth control advocates are anxious for the United States Supreme Court to rule on the constitutionality of the law.