PLATO was a pretty amazing computer system for it’s day. Here is a blurb from the wikipedia entry: 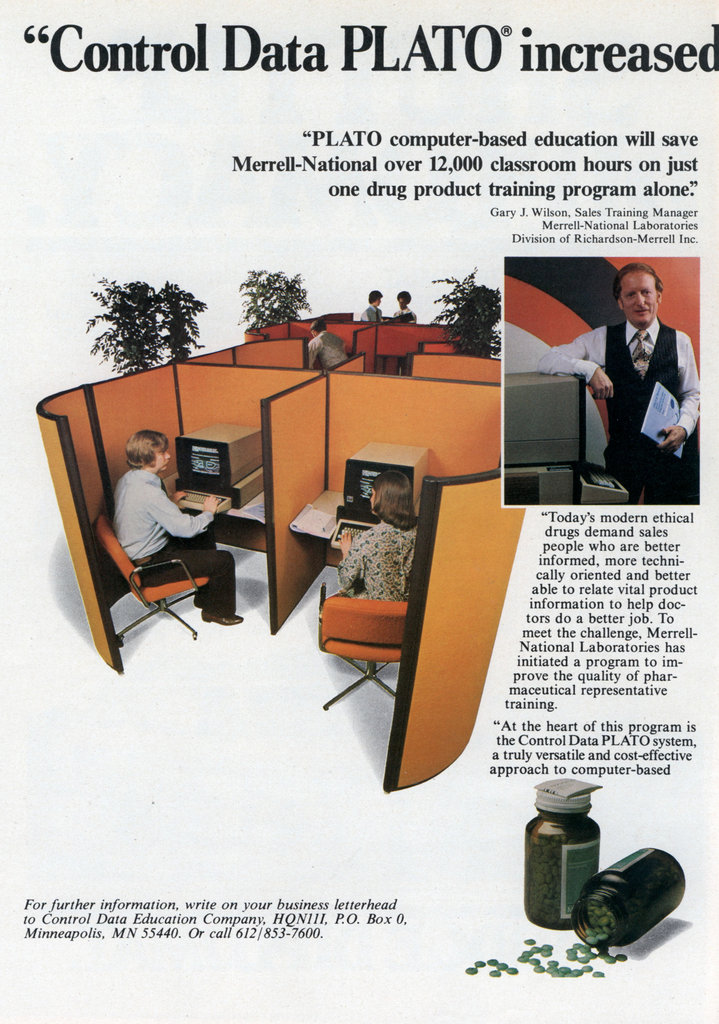 “At the heart of this program is the Control Data PLATO system, a truly versatile and cost-effective approach to computer-based education. Unlike programmed instruction that simply feeds out information, PLATO individualized instruction creates a constant dialogue with the learner… increases retention, compresses training time.

“For the initial phase of our program, we selected an antidepressant that is a mainstay of the Merrell line. With the PLATO system, we increased training efficiency over 167%…reducing a 4 day session for new representatives to a 1-1/2 day course with increased comprehension. That’s a savings of 20 classroom hours per student. When we retrain all of our representatives, we estimate we will save over 12,000 meeting room hours.

“The PLATO system allows us to decentralize our training. Control Data maintains PLATO-equipped Learning Centers throughout the U.S. These centers are specifically designed for individualized instruction. Our people work in the privacy of study carrels at a pace that is most comfortable for them. Not only are we producing better trained personnel this way, but we’re saving the cost of lodging, food and the miscellaneous expenses of taking people away from their jobs for extended in-plant training?”

Control Data PLATO is solving the tough training problems in many other industries
By simulating cockpit systems on a PLATO terminal, American Airlines, for a portion of crew training, has cut a full day off its training schedule…and is saving thousands of dollars on crew training.

It costs about $4,000 an hour to use an actual airplane for pilot training. A flight simulator brings the cost down to $400 an hour. The cost of training with the PLATO system is less than $20 an hour… and the added convenience and quality comes as a bonus.

Some other business examples:

The PLATO system is more than an education and training tool. It is a means of managing information and simulating real-life situations. You don’t identify PLATO advantages by what it has done for others. You do it by examining what the PLATO system can do to solve your own unique training problems.

And we’d like to help you do just that, with an interview or private demonstration. To get started, write on your business letterhead to Control Data Education Co., HQNllI, P.O. BoxO, Minneapolis, MN 55440. Or call 612/853-7600.

More than a computer company