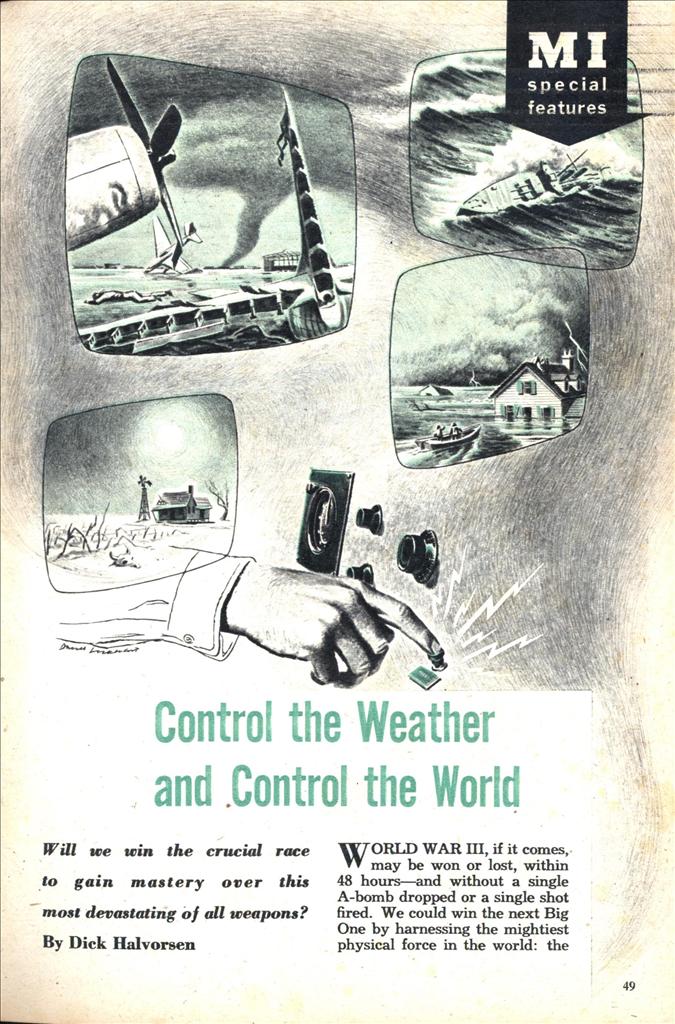 Will we win the crucial race to gain mastery over this most devastating of all weapons?

WORLD WAR III, if it comes, may be won or lost, within 48 hours—and without a single A-bomb dropped or a single shot fired. We could win the next Big One by harnessing the mightiest physical force in the world: the hitherto uncontrollable weather.

Fanciful nonsense? Crazy day-dreaming? Science-fiction? Not a bit of it. Consider these startling facts: A hurricane expends more energy in one minute than all the electrical power produced in the United States in the past 50 years. . .

Hurricane Edna, which ravaged the east coast of the U. S. in 1955, had more raw power packed in its 100-mph gales than all the A-bombs dropped since Hiroshima. . .

Off Luzon in the Philippines in 1944 a tropical typhoon swept down on three destroyers of the U. S. fleet. Each of the tin cans boasted 60,000-h’p engines— but their strength was as nothing against the fierce winds and all three warships turned turtle and sank with all hands…

The crushing Pacific typhoon of October 1945 sent seven warships to the bottom, drove more than 200 aground, wiped out army installations, roads, bridges and cities on Okinawa and killed hundreds of men with its 180-knot winds and 50-foot waves. . .

Tornadoes of 1952 destroyed a good percentage of the fighting strength of the Strategic Air Command, smashing expensive fighters and giant bombers into worthless wreckage. . .

How could weather be used as the most powerful weapon the world has ever known? History books of the future may well contain the following chapter: “The attack against the United States ” was launched early on the morning of September 26,1960. The enemy struck at half a dozen points, using submarine fleets to surprise and capture U. S. installations at Iceland, the Azores, Hawaii, Bermuda and Spitsbergen. Following the troop-laden subs came vast air armadas and then three great invasion fleets, two in the Atlantic, one in the Pacific.

“America met the attack, not with A-and H-bombers of the Strategic Air Command, but with the squadrons of the Air Weather Service and the Navy’s Weather Group. Their primary target was the enemy fleet coming up fast in the South Atlantic.

“Behind this fleet a late-season hurricane, nicknamed Jezebel, was brewing and weather planes moved to Brazilian bases to direct it. Their weapon was a super-thermite bomb which generated intense heat and produced vast low-pressure areas. As the hurricane began its normal northwesterly course, bombardiers dropped the heat bombs north and east of the swirling winds. Jezebel, seeking the line of least resistance, spun into the low-pressure area and followed the course laid down by the bombs—a course that led directly to the enemy fleet.

“The massed ships were hit with 150-knot gales and waves towering up to 100 feet. Cruisers capsized, their rudders torn loose. Overladen troop ships, unable to navigate, collided and sank. Destroyers and corvettes were driven far off their attack course. The enemy fleet scattered.

“But hurricanes were only one weapon in the arsenal of our weather service. Planes loaded with dry ice struck at the airfields captured by the enemy in our overseas bases. Heavy seeding of cloud formations over the fields produced torrents of rain that turned landing strips into quagmires and kept enemy air fleets grounded.

“Along America’s east coast, at Miami, Norfolk, New York and Boston, the weather service’s huge, mobile wave-making machines went into action, backed up by wind tunnels generating 2,000-mph gales. The ships of the enemy’s northern invasion fleet reached the coast to find themselves faced by raging seas and winds that made water-borne or air-borne landings impossible.

“While these defensive weather measures were being taken, German- and English-based weather planes raced aloft to utilize weather as a weapon of attack. Balloons carrying packets of silver iodide crystals were released into the everflowing jet stream which pours eastward across Europe at more than 100 mph, eight miles up.

“As the packets dissolved at varying distances, the crystals spilled out and enough of them seeded rain-swollen clouds to dump torrential downpours on the enemy’s industrial centers. The seeding was further aided by ground generators that pumped crystal-laden fog and smoke into winds prevailing toward the enemy’s homeland.

“There was no let-up in this war-by-weather. The enemy’s farm areas were saturated with thermite bombs, prolonging the seasonal drought, causing low- pressure areas which brought hot winds fanning up from the southern deserts. Drought parched the enemy’s crops; floods swept away his railroads; rains swamped his airfields and factories; mud bogged his roads and highways; hurricanes crushed his fleets; typhoons ravaged his coast; tornadoes crisscrossed his farmlands.

“Unable to withstand this terrible destruction that seemed more the work of a vengeful Deity than a weapon in the hands of man, the enemy sued for peace and World War III came to a quick end.”

However fantastic this war report may sound, it contains nothing that is not already “in the works!” Man has always tried to control the weather, from primitive drum-beaters to jet-borne cloud-seeders. Today, cloud-seeding with dry ice and silver iodide crystals are the approved rain-making techniques, although there have been rumors of successful electronic methods. In Project Cirrus, a joint Army-Navy test of rain-making techniques, generators burning coke impregnated with silver iodide shot smoke into the air which seeded thousands of miles of cloud in a few hours, with startling, rain-producing results.

According to Ferguson Hall, leading rain-making authority of the U. S. Weather Bureau, it would take a score of planes carrying 500,000 pounds of dry ice to seed a 100-square-mile area. With such an amount, he says, “We might even break up a lightning storm or kill a tornado or hurricane.”

According to Robert H. Simpson, director of the Bureau’s “Project Whirlwind,” data gathered in the past few hurricane seasons has produced evidence that hurricanes have an Achilles’ Heel where the application of force might affect its formation and path. But finding that vulnerable spot will require a systematic search.

There is much we have to learn about hurricanes. We do not yet know for sure the source of the storm’s energy, nor how it grows. We don’t know why a hurricane causes a “storm surge”—a general rise in water level inundating coastal regions. Hurricane waves more than 100 feet high have been reported, but do they occur singly or in series?

Weather cannot be duplicated in the laboratory to study cause and effect. Even on a clear, calm day the forces involved vary from minute to minute. The enormous number of unknowns makes accurate prediction a difficult job even for an electronic brain.

But in spite of the difficulties involved, the attack against the problems of weather prediction and control is going forward rapidly on many fronts.

Ground fogs have been conquered by dry ice and by heat. The imagination of meteorologists has been unfettered by these early victories and recently we have had such eye-opening suggestions as building huge ocean barriers to deflect warm currents to melt the arctic ice and make Greenland habitable. Another novel suggestion has been to drop soot on glacial areas to absorb the heat of the sun and melt the deep-frozen snow. ., , So great have been the strides of meteorology in recent years that Dr. Edward Teller, famed as father of the H-bomb, has predicted that weather control will be possible within ten years.

But will weather control be used for the good of mankind? Each victory against the forces of nature puts another deadly weapon in man’s arsenal. And here we are dealing with a force that makes man-made weapons seem like slingshots and beanshooters.

You can be sure that the military leaders of all nations are pushing research on weather control with all possible speed. Mathematician John von Neumann predicts that by 1980 a Weather Commission will be able to flick a switch and thaw the polar regions, or flick another switch and inflict a new Ice Age on the enemy’s terrain.

Scientist Vincent Schaefer has stated that it is already possible to limit the formation of super-cooled clouds in the atmosphere throughout the world. “In other words,” comments T. Morris Longstreth in his book Understanding The Weather, “an industrious enemy in time of war could overseed a nation’s clouds and sow drought at growing seasons.”

Military men know that such predictions are not beyond the realm of possibility. The race to control the weather is on—now! The loser will reap flood and drought, whirlwind and sandstorm, hurricane and typhoon—all the ruin and devastation the mighty forces of nature can wreak. This will be a defeat the brilliance of generals and the gallantry of a people cannot mitigate. There will be no second chance for the defeated.

So much for the loser in this dramatic race to control the weather.

The winner will control the world! •