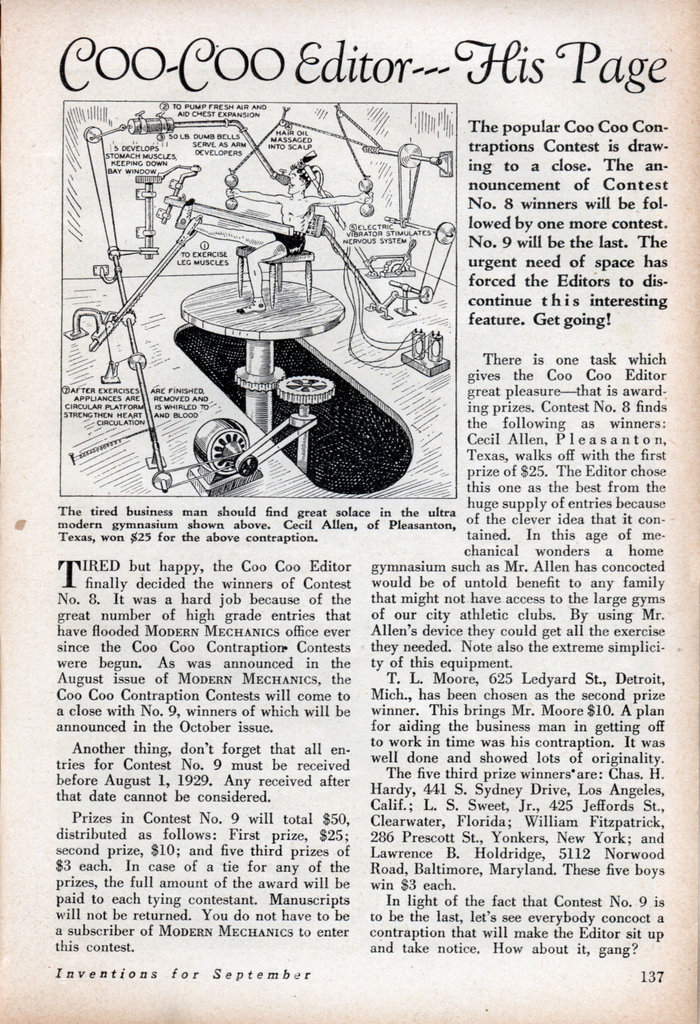 The popular Coo Coo Contraptions Contest is drawing to a close. The announcement of Contest No. 8 winners will be followed by one more contest. No. 9 will be the last. The urgent need of space has forced the Editors to discontinue this interesting feature. Get going!

Another thing, don’t forget that all entries for Contest No. 9 must be received before August 1, 1929. Any received after that date cannot be considered.

Prizes in Contest No. 9 will total $50, distributed as follows: First prize, $25; second prize, $10; and five third prizes of $3 each. In case of a tie for any of the prizes, the full amount of the award will be paid to each tying contestant. Manuscripts will not be returned. You do not have to be a subscriber of Modern Mechanics to enter this contest.

There is one task which gives the Coo Coo Editor great pleasureâ€”that is awarding prizes. Contest No. 8 finds the following as winners: Cecil Allen, Pleasanton, Texas, walks off with the first prize of $25. The Editor chose this one as the best from the huge supply of entries because of the clever idea that it contained. In this age of mechanical wonders a home gymnasium such as Mr. Allen has concocted would be of untold benefit to any family that might not have access to the large gyms of our city athletic clubs. By using Mr. Allen’s device they could get all the exercise they needed. Note also the extreme simplicity of this equipment.

T. L. Moore, 625 Ledyard St, Detroit, Mich., has been chosen as the second prize winner. This brings Mr. Moore $10. A plan for aiding the business man in getting off to work in time was his contraption. It was well done and showed lots of originality.

In light of the fact that Contest No. 9 is to be the last, let’s see everybody concoct a contraption that will make the Editor sit up and take notice. How about it, gang?