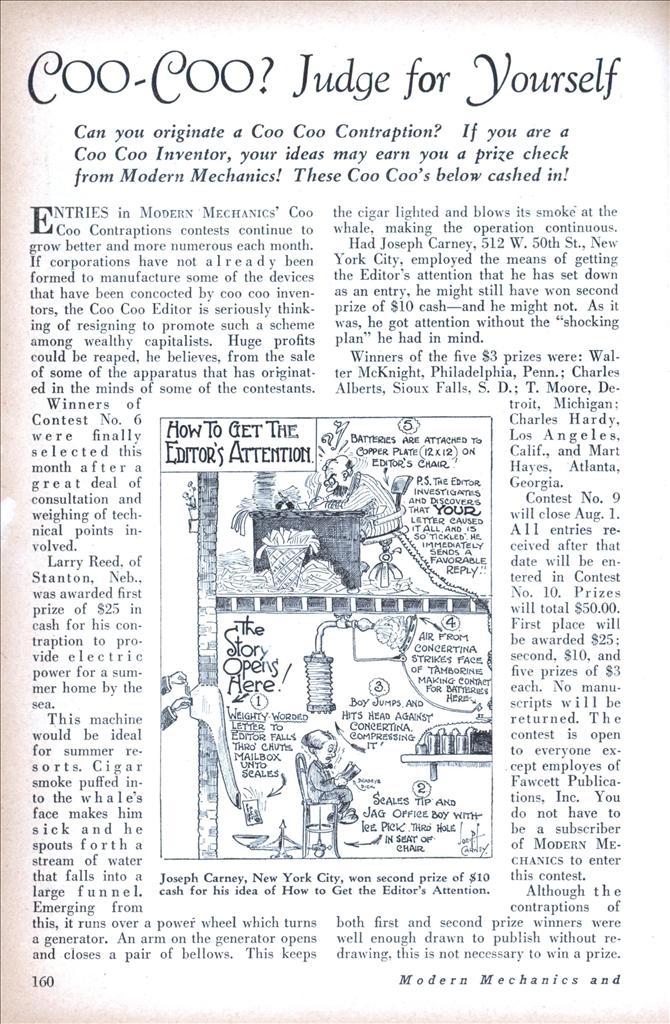 COO-COO? Judge for Yourself

Can you originate a Coo Coo Contraption? If you are a Coo Coo Inventor, your ideas may earn you a prize check from Modern Mechanics! These Coo Coo’s below cashed in!

Entries in Modern Mechanics’ Coo Coo Contraptions contests continue to grow better and more numerous each month. If corporations have not already been formed to manufacture some of the devices that have been concocted by coo coo inventors, the Coo Coo Editor is seriously thinking of resigning to promote such a scheme among wealthy capitalists. Huge profits could be reaped, he believes, from the sale of some of the apparatus that has originated in the minds of some of the contestants.

Winners of Contest No. 6 were finally selected this month after a great deal of consultation and weighing of technical points involved.

Larry Reed, of Stanton, Neb., was awarded first prize of $25 in cash for his contraption to provide electric power for a summer home by the sea.

This machine would be ideal for summer resorts. Cigar smoke puffed into the whale’s face makes him sick and he spouts forth a stream of water that falls into a large funnel. Emerging from this, it runs over a power wheel which turns a generator. An arm on the generator opens and closes a pair of bellows. This keeps the cigar lighted and blows its smoke” at the whale, making the operation continuous.

Had Joseph Carney, 512 W. 50th St., New York City, employed the means of getting the Editor’s attention that he has set down as an entry, he might still have won second prize of $10 cash—and he might not. As it was, he got attention without the “shocking plan” he had in mind.

Contest No. 9 will close Aug. 1. All entries received after that date will be entered in Contest No. 10. Prizes will total $50.00. First place will be awarded $25; second. $10, and five prizes of $3 each. No manuscripts will be returned. The contest is open to everyone except employes of Fawcett Publications, Inc. You do not have to be a subscriber of Modern Mechanics to enter this contest.

Although the contraptions of both first and second prize winners were well enough drawn to publish without redrawing, this is not necessary to win a prize.

CHEAP POWER FOR COTTAGE BY THE SEA Heavy weight (1) is attached to tail of whale (2). Whale spouts water (3) which is caught in large funnel (4), runs over power wheel (5), which turns generator (6) thus furnishing power to cottage (7).

Water runs back into ocean at (8) to be used over again.

Eccentric (9) on generator opens bellows (10) which draws smoke from cigar (11), through valve (12), and on next stroke—forces smoke out through valve (13) and puffs same in whale’s face through nozzle (14).

This makes whale sea sick and it starts throwing up water again.