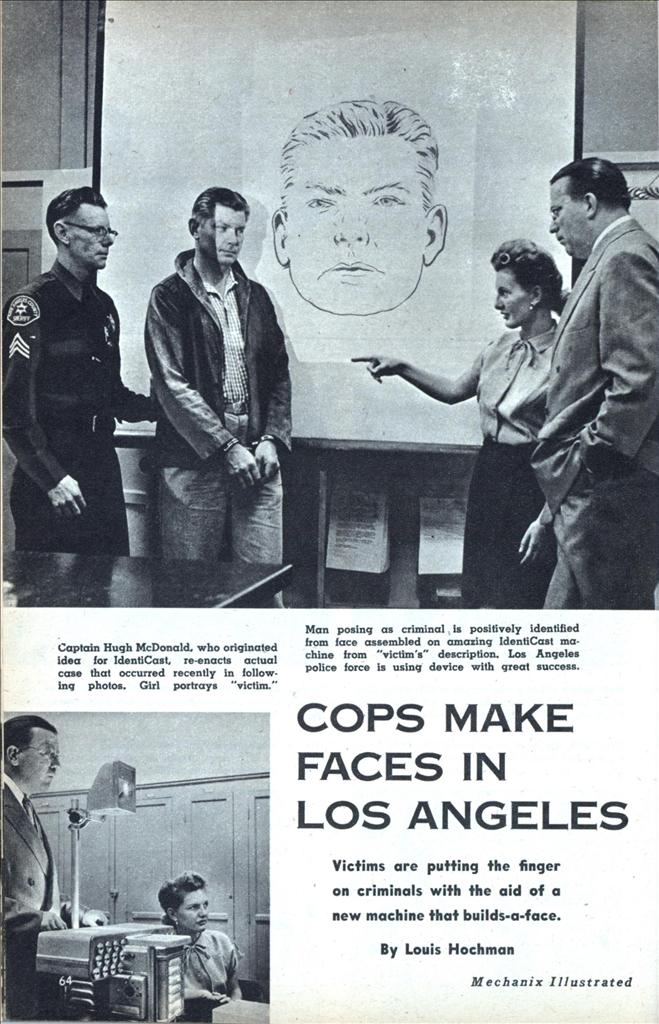 Victims are putting the finger on criminals with the aid of a new machine that builds-a-face.

IT was a dark, lonely night and the attractive young Los Angeles woman walking down the street had no way of knowing that the man who had befriended her and was walking beside her was a dangerous sex criminal. For three blocks they walked and talked—suddenly the man turned on the girl, beat her mercilessly with his fists and shot her through the head.

Left for dead, the girl miraculously regained consciousness and managed to stagger to a motel where she received aid. After several days of hospitalization she finally felt strong enough to talk to the police. Still vivid in her mind was an impression of the criminal’s appearance and, as she described each individual feature, Capt. Hugh C. McDonald of the Los Angeles Sheriff’s Office turned dials on a peculiar type of projection machine. Each dial brought into focus on a large screen a sketch of the particular feature being described.

First, several hair styles moved across the screen until the one most closely resembling the criminal’s came into view. Then eyes of different types came into view and when the girl recognized a pair as being similar to those of the criminal, that pair was left in register with the chosen hair style being projected. The same happened with the brows, the nose, the chin and the ears. When all the individual features were assembled into a portrait on the screen, the girl cried out, “That’s him! That’s the man who shot me!”

By a strange coincidence, that same afternoon a man, complying with the California State law which compels all known sex offenders to register with the police, walked into the record bureau to register. He was automatically photographed and as his picture was later being processed

through the sex crime detail, the sergeant at the desk jumped. On his desk was a copy of the picture compiled and projected by the unique projection machine and when this picture was compared with the photograph of the registered sex offender, a remarkable similarity was immediately evident. Two days later, the sex offender was taken into custody and positively identified by the wounded girl. He is now serving a life sentence in San Quentin, probably still wondering about the devilish machine that so quickly and. accurately put the finger on him.

That “devilish” machine, known as the IdentiCast, is one of the latest developments in the field of criminology and its uncanny ability to build picture likenesses of people from mere Word-of-mouth descriptions promises to revolutionize the entire system of criminal identification. The IdentiCast was the idea of Captain Hugh McDonald of the Los Angeles Police Department, who believed that any person’s likeness could be pictorially built up from combinations of sketches that depicted the various types of individual facial features. His idea was to break down the various feature characteristics into a set of individual categories, sketching them on rolls of transparent film or cells which could be passed through a projection machine in superimposed layers in such a manner that any combination of individual feature types could be assembled and brought into register like a jigsaw puzzle and projected on a screen as a complete and individual portrait.

His idea became a reality when, by chance, he met Harold G. FitzGerald, head of Victorlite Industries of Los Angeles, which manufactures the VisualCast, a unique projection machine used by lecturers and sales organizations for project- ing their products and ideas from film transparencies. Working on McDonald’s idea, FitzGerald designed and built an adapter to his VisualCast which converted it from a single strip projector to a multiple strip one.

This adapter, dubbed the IdentiCast, is similar to a strip film negative carrier but instead of holding just one strip of film, it holds seven strips, each on an individual pair of rollers. These strips are passed together in stacked form over the light aperture. Each film strip carries a series of sketches that depict the various types of individual feature characteristics. One strip carries all the common hair types, another all the eyebrow types, another the eye types, and ditto the nose, lips, chin and ear types. Dials on the rollers permit individual manipulation of any of the film strips, making it possible to move one strip back and forth while the other strips remain in fixed positions. In this manner, any variety of feature combinations can be assembled to produce an infinite number of facial likenesses.

In use, the victim or eye witness of a criminal’s abuse describes his likeness, feature by feature, to the IdentiCast operator who twirls the knobs on the machine to bring the various described feature types into view on the screen. When the witness recognizes a feature as being similar to that of the criminal’s, that feature is left in position and the film strip bearing the next series of feature types is brought into play. Eventually, as each chosen feature is brought into register on the screen, the assembled portrait begins to take on the likeness of the criminal being described.

Very often, however, even though all the features have been assembled, the witness may still feel that the likeness is not just right. At this point, the IdentiCast operator makes use of a very important adjustment. By sliding the film rollers in and out slightly, he can pull together or pull apart the individual features on the screen and thus alter the proportions and general shape of the head. The chin can be moved up to produce squatter features, eyebrows can be raised or lowered, as well as the forehead, ears and other features. These slight changes, in most cases, are all that are needed to verify the likeness being assembled.

“Actually,” explains Captain McDonald, “we’re not after an exact portrait. We’re used to discrepancies in descriptions. All we want to know is, if someone saw a man that looked like that picture, could he be the man? If the answer is yes, then that’s enough for us. A fair likeness built up with the IdentiCast will narrow our search down to a limited group of feature types and if the guilty one is caught in our dragnet, we’ll know how to separate him from the innocent ones of similar feature characteristics.”

Having proven its value as an aid in criminal identification, a special coding system is now being worked out for the IdentiCast which will make it possible for police departments all over the country to build up a similar likeness with duplicate machines as soon as the code numbers are flashed to them. Each individual feature type will be given a code number. As soon as a criminal’s likeness is built up to the eye-witness’ satisfaction, the code numbers of each of the features used will be flashed instantly to law enforcement agencies all over the country where, using similar IdentiCast machines and guided by the code numbers, exact duplicates of the original likeness will be built up. Thus, in a matter of minutes, every agency in the country using an IdentiCast projector will have a copy of the likeness described by the eye-witness. The projected image is then copied photographically and the nationwide man hunt is on.

Another project being worked out now is the design and construction of a small, portable viewing box-type IdentiCast machine which can be carried in all patrol cars. These will have smaller size duplicates of the same film strips which will be manipulated and viewed through a light box instead of being projected.

With such amazing developments in the offing it won’t be long before a bank robber, making his getaway, will run smack into his picture posted on a wall with the legend, “Wanted for Bank Robbery.” •