This article also contains pictures of an early version of a breathalizer called the “Drunk-O-Meter” and an early automatic speed trap camera. 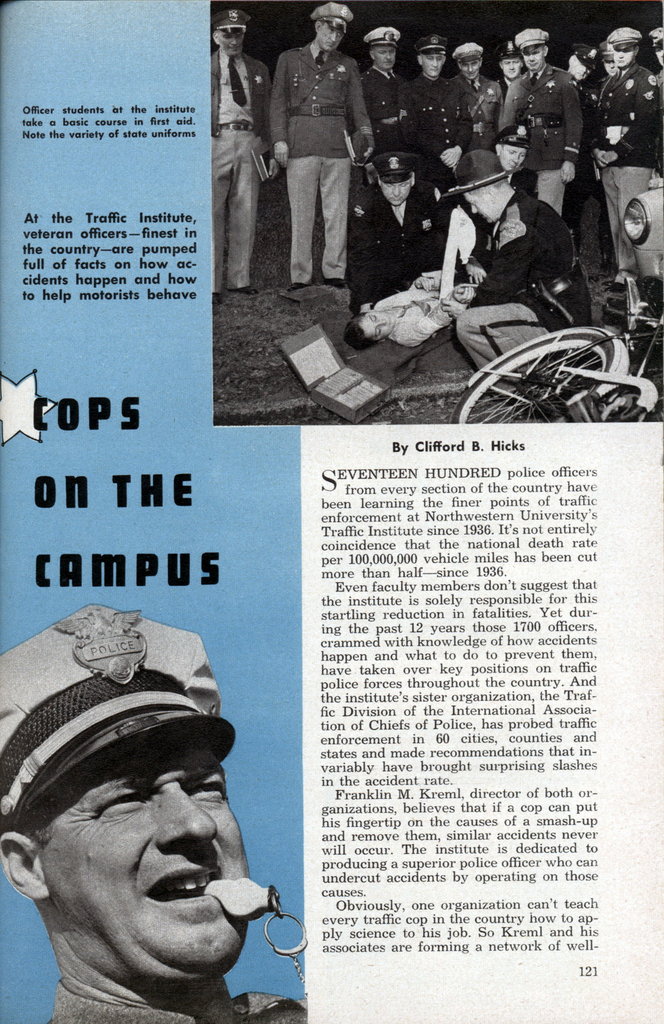 COPS ON THE CAMPUS

At the Traffic institute, veteran officers â€”finest in the countryâ€”are pumped full of facts on how accidents happen and how to help motorists behave

SEVENTEEN HUNDRED police officers from every section of the country have been learning the finer points of traffic enforcement at Northwestern University’s Traffic Institute since 1936. It’s not entirely coincidence that the national death rate per 100,000,000 vehicle miles has been cut more than halfâ€”since 1936.

Even faculty members don’t suggest that the institute is solely responsible for this startling reduction in fatalities. Yet during the past 12 years those 1700 officers, crammed with knowledge of how accidents happen and what to do to prevent them, have taken over key positions on traffic police forces throughout the country. And the institute’s sister organization, the Traffic Division of the International Association of Chiefs of Police, has probed traffic enforcement in 60 cities, counties and states and made recommendations that invariably have brought surprising slashes in the accident rate.

Franklin M. Kreml, director of both organizations, believes that if a cop can put his fingertip on the causes of a smash-up and remove them, similar accidents never will occur. The institute is dedicated to producing a superior police officer who can undercut accidents by operating on those causes.

Obviously, one organization can’t teach every traffic cop in the country how to apply science to his job. So Kreml and his associates are forming a network of well-trained men to blanket the country. Only those officers who are in key positions, or soon will work their way into those positions, are accepted as students, on the theory that the techniques these men are taught will sift down to every officer who waves a white glove or lives in the saddle of a motorcycle. Key men from every section of the country and from Panama, Canada, the Canal Zone, the Philippines, Puerto Rico, Mexico and China have graduated and now are directing model programs of traffic control.

Because the officer students are key men, they also are experienced patrolmen. Many have spent five to 15 years on motorcycles or in patrol cars. They already know how to handle traffic, so the instructors focus training on long-range programs for reducing accidents.

Part of the institute’s program is basic research in traffic control. The U. S. Public Roads Administration and other interested organizations provide grants for research projects.

James Stannard Baker, Director of Research, has on the drawing board a mechanical cop that should be able to snare any driver who speeds through a restricted zone. The heart of the instrument will be a radar device for determining the speed of the car. Baker plans to combine this radar with a camera and a stroboscopic light.

The instrument will be pointed down the highway. Each car that passes the mechanical cop will come within the field of its radar beams. These beams bounce back to the instrument at a rate depending on the speed of the car. When a car exceeds the speed limit, the radar will trip the camera shutter and the light. The camera snaps a photo of the rear end of the car, plainly showing the license plate. One edge of the film catches a photo of a speedometer and a 24-hour watch. After the photo is snapped the camera rolls the film for the next exposure.

At the end of every 24 hours the film is removed from the camera and developed. It contains a photo of every car that speeded, the license plate, and shows the actual speed and time of day of the violation. The speeder then is mailed a ticket and the photo becomes positive evidence in court.

Baker realizes that thoughtless persons who invariably push the edge of the law will raise an objection to the instrument when it is placed in use on the grounds that it spies on drivers. He points out that traffic lights and parking meters raised violent protest when first installed, but today they are accepted by every driver. The mechanical cop can’t be bribed by a speeder who tries to buy his way out of trouble. And one patrolman with eight machines can replace about eight officers and the same number of patrol vehicles.

The research department also-is working on a project to determine the “halo” effect of a cop. It’s known that when a driver sees an officer he invariably slows down or pays scrupulous attention to highway signs. Just how far does this “halo” effect, this radiation of the cop’s presence, extend? Half a mile? Three miles? The research department is determining the patrolman’s average range of influence by observing what drivers do over a long distance before and after they see an officer.

About 30 officers attend each 4-1/2-month course at the institute. Sixteen are awarded fellowships that pay all their expenses. Most of the others receive scholarships of some kind, and every officer, by previous agreement, draws his regular pay from his home town.

These picked officers attend classes 39 hours each week and crack the books for well over 30 hours outside class â€” a tough weekly grind.

The instructors pump knowledge into them on such specialized subjects as accident investigation and photography, questioning of suspects and how to present a court case. They learn to use scientific instruments in traffic enforcement. Students pick up the fundamentals of the “drunk-o-meter,” an instrument for determining the alcoholic content of the blood. The suspect is required to blow up a balloon, and the instrument puts his breath through a series of tests to give a positive answer as to the amount of alcohol his system has absorbed.

Officers also learn to use the “Enoscope,” an instrument that is as simple as it is effective. The Enoscope actually is a horizontal periscopeâ€”a frame containing two openings at right angles and a mirror at a 45-degree angle to pick up the view of one opening and reflect it through the other. An officer places two Enoscopes a known distance apart along a highway and stands between them with a stop watch in his hand. When a car passes one of the instruments he sees it flash in the mirror. By timing the car until he sees an answering flash in the other mirror he can figure its exact speed.

After the student cop digests books, lectures and discussions for three quarters of his term he is assigned to investigate traffic control in a town similar in size to his home town. For one week he probes the ins and outs of traffic police administration in that town, working with everyone from the mayor to the cop at the intersection. When he returns to the campus he is required to write a detailed report on the traffic police program. The report is not just a record of what he saw. but an interpretation of what can be done to increase safety in the town through wise traffic enforcement.

Some of the knowledge crammed into the officer’s head may save home-town taxpayers some money when he returns to his job. For example, selective enforcement is emphasized throughout the course. Instructors explain this technique by pointing out that accidents occur according to definite patterns. Cars may frequently smash up on a particular corner between 5:00 and 6:00 p.m. Another area may be a hazard between 7:00 and 8:00 a.m. These areas need special attention from the traffic police at particular times, but they are as safe as other areas the rest of the day. By making a master pattern of such accidents for an entire town, city or county, and enforcing the danger areas “selectively,” the head of the traffic police may, in some cases, reduce his force without any cut in its efficiency.

Modern training aids help the student cops solve traffic problems. One classroom has a magnetic blackboard which attracts and holds small models of cars, so that the instructor quickly can set up a visual problem in enforcement. The officers get an overview of everything that’s new in enforcement through demonstrations of wire recorders for taking statements of witnesses, speed tests in relation to stopping distances, walkie-talkies for emergency use, and the latest developments in engineering equipment.

The 4-1/2-month course is not the only service of the institute and the IACP. They also offer a basic course in enforcement lasting only three weeks, sponsor regional courses in other parts of the country, courses for judges and prosecutors of traffic courts and a course for supervisors of large fleets of vehicles. In addition, the institute publishes information on enforcement, maintains a library of films dealing with traffic and backs up its graduates with an extension service. Extension men go into the officer’s home town and help him apply what he has learned at the institute.

Hundreds of photos are submitted to the institute each year during the contest for police photographs. These pictures are snapped by officers on active duty. In last year’s contest one photo showed a lipstick print on a car compared to the lipstick prints of a hit-and-run victim, resulting in a prison term for the driver.

Facilities aren’t available for training the number of officers who are eager to attend the course. One young man was so enthusiastic about the institute after a visit that he immediately applied for enrollment. Unfortunately, he was not an officer and had never been on any police force, so his application was rejected. A few days later he telephoned from his home townâ€”population a few hundredâ€” that he had persuaded the village fathers to appoint him Chief of Detectives. Kreml accepted him as a student on the theory that anyone with that much ingenuity could serve well in unsnarling some of the present traffic problems.