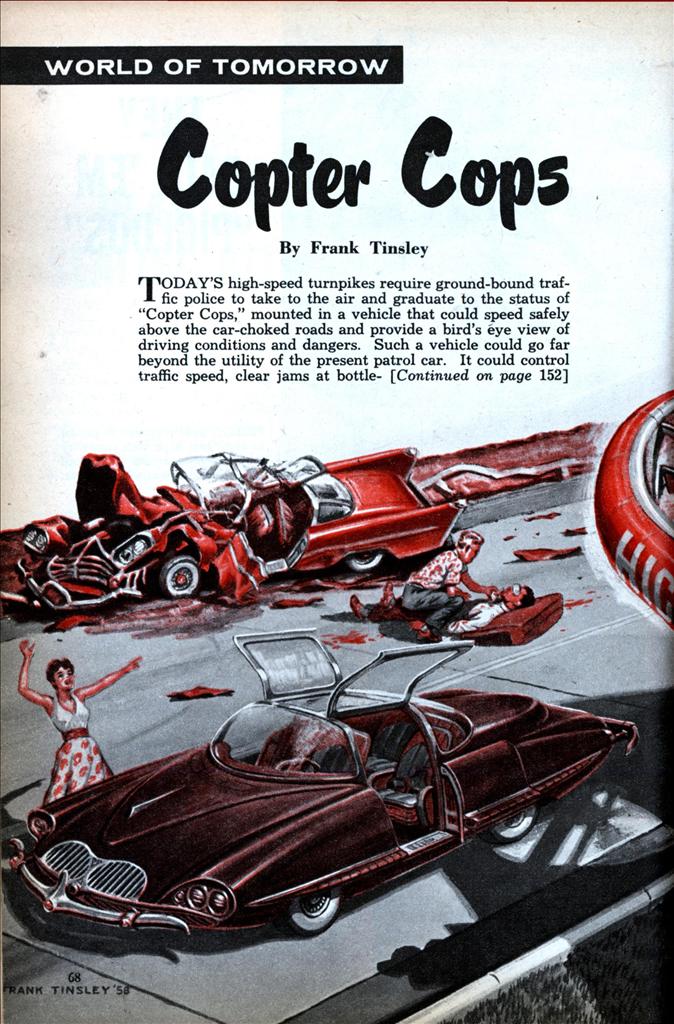 TODAY’S high-speed turnpikes require ground-bound traffic police to take to the air and graduate to the status of “Copter Cops,” mounted in a vehicle that could speed safely above the car-choked roads and provide a bird’s eye view of driving conditions and dangers. Such a vehicle could go far beyond the utility of the present patrol car. It could control traffic speed, clear jams at bottle- necks, perform emergency rescue work and provide fast aerial ambulance service, plus offering a more efficient pursuit of criminals.

Mi’s paddy-wagon for Copter Cops is based on the Army’s specifications for a compact, high-lift aerial jeep. It takes the form of a stable “flying platform,” built around three ducted-fan units. Each of these is fitted with a pair of contra-rotating propellers spinning on a horizontal plane to drive a column of air downward. The force of this airstream provides the machine’s lift. Power is provided by twin gas turbines.

The vehicle is designed to carry three policemen, the minimum crew for efficient patrol work. In the event of a wreck, as shown, it lands on the central safety island with one of the crew clearing a space by directions called through an electric “bull horn.” Upon landing, one of the men takes over traffic control while the other two place the injured on litters and lock them safely in place in the enclosed “Utter wells” on either side of the copter’s cabin.

The pilot then takes off for the nearest hospital, leaving his mates to superintend activities at the accident scene. Upon the patrol vehicle’s return, a cable is hooked to the wreck and it is dragged or lifted to a safe spot off the highway.

With its inflated pontoon rim, Mi’s copter is capable of landing on land, water or in deep snow. A kit of emergency tools is carried and the crew is armed with rifles and sub-machine gun. Floodlights are set in the lower surface and a built-in loud speaker can be used to flag down an offending vehicle. •