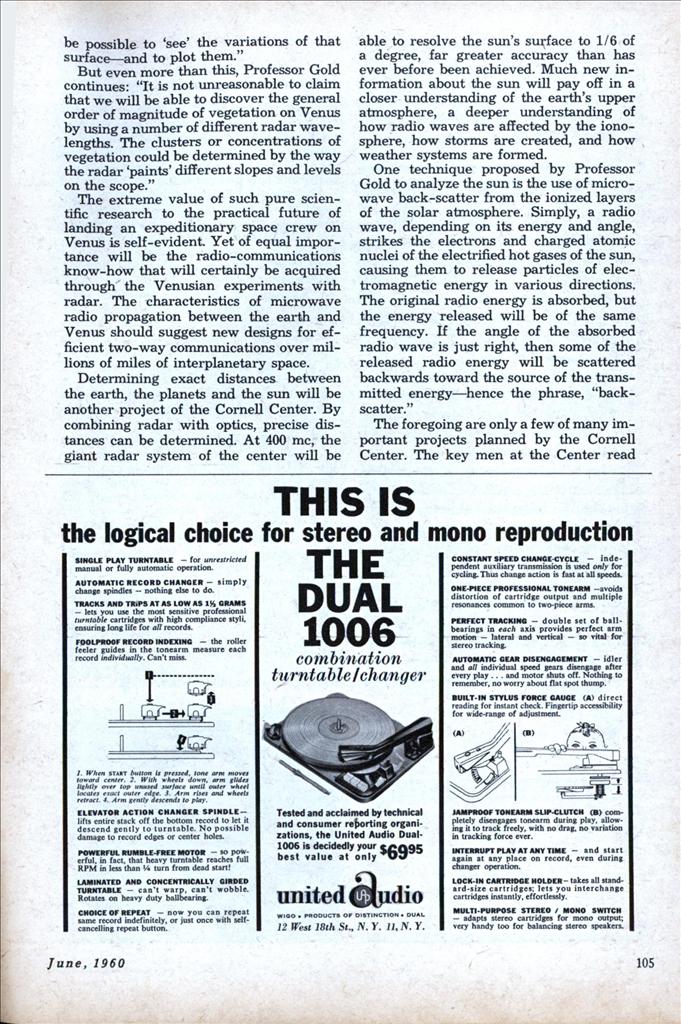 electronics “talks” to the universe through

Life on other planets? How can we communicate?

These are questions for Cornell’s new space center.

THERE are about ten-billion suns in our “local” universe, the Milky Way. Will man be able to communicate with countless planets that are probably revolving about them? Is our knowledge of radio adequate? The planet Venus—apart from the moon, our closest celestial neighbor—may very well be teeming with life. Can powerful radar pulses penetrate through its cloudy atmosphere to verify or deny this?

Man’s questions are many. Are new universes continuously being created somewhere in the depths of intergalactic space, or did one gigantic explosion spread the stuff that made the atoms, the stars and the dust? How did the earth itself originate? How did intelligent life evolve on its surface? Those recently discovered high-energy radiation belts that surround the earth—are they a cause of human illness?

The answers to such important questions may very well be answered by a new coordinated effort of scientists at Cornell University. Outstanding experts in electronics, nuclear physics and astrophysics will coordinate with top authorities in radio, electrical and aeronautical engineering. They will also work closely with the scientists of the National Aeronautics and Space Administration (NASA) as well as with those of the Defense Department’s Advanced Research Projects Agency.

The new effort is dedicated to pure scientific research, finding the keys to unlock the mysteries of the total universe. The Cornell Center for Radio-physics and Space Research is being headed by Professor Thomas Gold, an Austrian-born astrophysicist who has startled the scientific world with his bold theories. He is one of those rare birds of science—a combination engineer and theoretician—a practical dreamer.

Soft-spoken but intense, Professor Gold’s theories are derived from an incredible store of knowledge. In 1953 he said that sunspot “explosions” start solar magnetic fields suddenly expanding into space, pushing electrically charged gases ahead of them. In effect, they are magnetic shock-waves and when they finally strike the earth’s magnetic field, violent fluctuations occur, causing auroras and disrupting communication. This theory was proposed five years before the IGY. Six years later, in May 1959, scientists at AVCO proved the correctness of his theory by simulating the same effects in their laboratory.

Professor Gold is even more famous among astrophysicists for another theory that he developed in collaboration with Herman Bondi and Fred Hoyle at Cambridge U. in England. This is the assumption of a “steady-state” universe. Gold says that the universe is eternally adding new material to itself from some secret source. As the universe’s matter accelerates away from its center, it approaches the speed of light— at which point it becomes electromagnetic energy, thus returning to the “universal” fountain of energy from which new universes are born. One of the big aims of the Cornell space center is to check the correctness of this concept.

Intergalactic space appears to be a vast mass of electrostatic charges, magnetic fields and electromagnetic radiations. The recent discovery of anti-matter indicates that an “anti-universe” must also exist somewhere—a universe in which all the atomic particles are electrically charged exactly opposite to those of our own universe. Such a situation would set up a field -force between the two universes, just as the two plates of a capacitor are charged oppositely, setting up an electrostatic tension between them. Such a universal tension could act as a conductor of energy through apparently “empty” space—again, as a capacitor transports radio-frequency, cycling it into more direct impulses.

The propagation of electromagnetic waves through space might occur in a similar way. Radio waves, like light, are electromagnetic energy. So the special way by which we see things, as well as our ability to communicate by radio, may be possible in space because space itself is an electrical conductor. This is an intriguing idea, for if it’s true, man may be able to communicate through the “void” instantaneously— without being hampered by the “slowness” of the speed of light.

For example, to send a radio signal one way to the nearest star would take about four years. Another four years would lapse before the answering signal could be received on earth. Other complications are interference from natural radio sources (radio-emitting stars and galaxies) and the position of the star toward which we are beaming our signals. If the star is located in front of a strong natural radio source, cosmic radio interference will over-ride the answering signals, if any. There would be no way of knowing whether our signals were reaching intelligent beings alive on a planet orbiting about that star.

Two physicists, Drs. G. Cocconi and P. Morrison, have collaborated recently on a method to make use of radio to determine whether intelligent life exists elsewhere in the universe. A main point of their proposal is the calculation of the most favor- able positions in the Milky Way toward which to beam radio signals. This would be a region where cosmic “static” is at a minimum.

Dr. Morrison is an advisor to the new Cornell Center. He and his colleague have stated that near some star like our sun there probably are civilizations with scientific interests and technical possibilities much greater than those available to us. To these intelligent beings our own sun must appear as a likely site for the evolution of a new society. It is probable that for a long time they will have been expecting the development of science near our sun. We shall assume that long ago they established a channel of communication that would one day become known to us, and that they look forward patiently to the answering signals from us that would make known to them the fact that a new society has entered the community of intelligence. In other words, they are waiting for word from us.

The word “radiophysics” in the Cornell Center’s name is significant. It refers to the field of science where research into all the aspects of physics—from the formation of the earth to the evolution of the total universe—is carried out primarily by using radio as the tool of investigation. This covers everything from antenna design to microwave amplification, and from solid-state physics to magneto-hydrodynamics. This last mentioned imposing subject is one of the newest of the physical sciences and concerns itself with the investigation of the fluid relationships between magnetic fields and electrically charged gases.

Professor Gold will soon have available (by 1961), a thousand-foot-diameter radar antenna driven by a transmitter of 2.5 megawatts peak power. This instrument will permit penetration of the dense gases, thousands of miles thick, in the atmosphere of Jupiter. It will reach the very core of that planet—the giant of our solar system. Jupiter’s average distance from Earth is about 500-million miles.

The radar system of the Cornell Center, to be located in Puerto Rico, will be capable of transmitting such strong signals that reflected echo will have 10,000 times the power of those received from Venus during the Air Force’s recent radar probe of that planet from their Cambridge Research Center.

According to Professor Gold, “At the present time, we have just barely been able to detect Venus. This power (of the Cornell radar) would make possible the actual penetration of the Venusian surface. It will be possible to ‘see’ the variations of that surface—and to plot them.”

But even more than this, Professor Gold continues: “It is not unreasonable to claim that we will be able to discover the general order of magnitude of vegetation on Venus by using a number of different radar wavelengths. The clusters or concentrations of vegetation could be determined by the way the radar ‘paints’ different slopes and levels on the scope.”

The extreme value of such pure scientific research to the practical future of landing an expeditionary space crew on Venus is self-evident. Yet of equal importance will be the radio-communications know-how that will certainly be acquired through the Venusian experiments with radar. The characteristics of microwave radio propagation between the earth and Venus should suggest new designs for efficient two-way communications over millions of miles of interplanetary space.

Determining exact distances between the earth, the planets and the sun will be another project of the Cornell Center. By combining radar with optics, precise distances can be determined. At 400 mc, the giant radar system of the center will be able to resolve the sun’s surface to 1/6 of a degree, far greater accuracy than has ever before been achieved. Much new information about the sun will pay off in a closer understanding of the earth’s upper atmosphere, a deeper understanding of how radio waves are affected by the ionosphere, how storms are created, and how weather systems are formed.

One technique proposed by Professor Gold to analyze the sun is the use of microwave back-scatter from the ionized layers of the solar atmosphere. Simply, a radio wave, depending on its energy and angle, strikes the electrons and charged atomic nuclei of the electrified hot gases of the sun, causing them to release particles of electromagnetic energy in various directions. The original radio energy is absorbed, but the energy released will be of the same frequency. If the angle of the absorbed radio wave is just right, then some of the released radio energy will be scattered backwards toward the source of the transmitted energy—hence the phrase, “back-scatter.”

The foregoing are only a few of many important projects planned by the Cornell Center. The key men at the Center read like a Who’s Who in Radiophysics. Their job will be to correlate practical observations with the best inferences of theory— a two-way correlation between actual information and ideas. In this sense, the new Cornell space center is a unique cosmic clearing house.