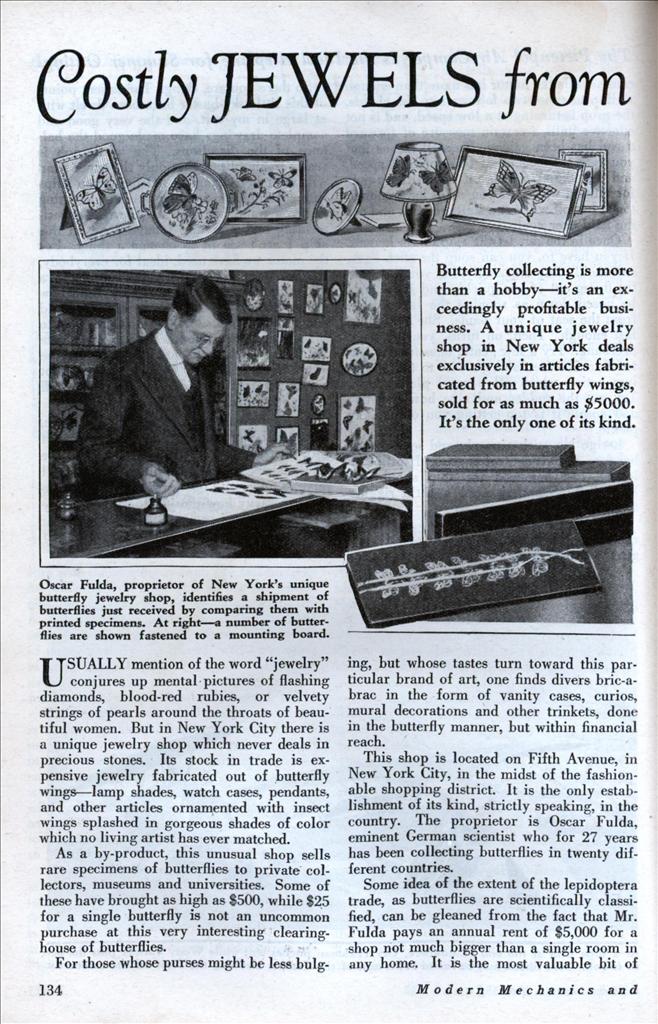 Butterfly collecting is more than a hobby—it’s an exceedingly profitable business. A unique jewelry shop in New York deals exclusively in articles fabricated from butterfly wings, sold for as much as $5000. It’s the only one of its kind.

USUALLY mention of the word “jewelry” conjures up mental pictures of flashing diamonds, blood-red rubies, or velvety strings of pearls around the throats of beautiful women. But in New York City there is a unique jewelry shop which never deals in precious stones. Its stock in trade is expensive jewelry fabricated out of butterfly wings—lamp shades, watch cases, pendants, and other articles ornamented with insect wings splashed in gorgeous shades of color which no living artist has ever matched.

As a by-product, this unusual shop sells rare specimens of butterflies to private collectors, museums and universities. Some of these have brought as high as $500, while $25 for a single butterfly is not an uncommon purchase at this very interesting clearinghouse of butterflies.

For those whose purses might be less bulging, but whose tastes turn toward this particular brand of art, one finds divers bric-a-brac in the form of vanity cases, curios, mural decorations and other trinkets, done in the butterfly manner, but within financial reach.

This shop is located on Fifth Avenue, in New York City, in the midst of the fashionable shopping district. It is the only establishment of its kind, strictly speaking, in the country. The proprietor is Oscar Fulda, eminent German scientist who for 27 years has been collecting butterflies in twenty different countries.

Some idea of the extent of the lepidoptera trade, as butterflies are scientifically classified, can be gleaned from the fact that Mr. Fulda pays an annual rent of $5,000 for a shop not much bigger than a single room in any home. It is the most valuable bit of space in the most expensive renting-district.

Hardly a day passes that some discerning society lady, or gentleman bent on bestowing a precious gift, does not enter Mr. Fulda’s establishment to purchase some trinket which has been ornamented with rare butterfly wings. There are lavallieres, rings, bracelets, brooches and other baubles which have been touched up with the butterfly’s satiny splendor. These jewels range in price from $50 to $5,000. Two women, specially-trained Viennese artists, attend to the embellishments after Mr. Fulda has finished with the scientific treatment of the wings.

A great volume of trade is represented by the demand for trays, dishes, lamp shades, framed butterflies and other decorative novelties into which the butterflies are fashioned. The requests for these objects as well as the articles of jewelry treated with butterfly wings come from all parts of the country as well as Europe.

The types of butterflies which are turned into great commercial value at Oscar Fulda’s butterfly store do not flit about the ozone in the Fifth Avenue purlieus, nor are they to be found flouncing jauntily about the garden and the fields of New England, California, or points directly north or south.

As a matter of fact these precious lepidoptera must be sought in distant regions, with rare technique and sometimes at an enormous cost. Though the collecting of butterflies is a pastime which was enjoyed in remote antiquity, many centuries ago, the tricks in trapping them have not altered very noticeably with the flight of the ages.

“Certain fundamental facts are known to the student of natural history,” declared Mr. Fulda. “Those observations were known to the Persians and the Egyptians of ancient times and are still part of our guiding lore in the capture of the elusive and precious lepidoptera.

“Three months of every year I leave my Fifth Avenue shop and laboratory and I travel to India or New Guinea, Brazil, Madagascar, New Mexico, Siam or China. It is then that I go in pursuit of the valuable species of butterflies, made costly not only by their rarity but also by their magnificent colors—colors which I have never seen reproduced by any mortal artist on canvas.

“It is in Madagascar, an island in the Indian Ocean, off the east coast of Africa, that I search for the most beautiful and most valuable insect in the world. This butterfly is known as the Urania Ripheus. I have never seen such an exquisite combination of colors in either nature’s or man’s handiwork. One of these butterflies occasionally brings several hundred dollars.

“Some persons might wonder why the artistic ornamentation of a particular piece of jewelry with butterfly wings should enhance its value so many times over. Aside from the superior art work which it portrays, there is still another item to be taken into consideration. That is the human relations end of it.

“For instance, let us assume that butterflies are, or once were, your particular hobby. Science tells us that every man and woman is smitten with some hobby or other. More hobbies and less crime might make this a happier cosmos to live in. Anyway, supposing you are a lover of butterflies, and you are acquainted with the gorgeous Brahmae Wallicki specie which is native to Assam, India, and you want that type to decorate the face or back of your watch. You can readily see that, if you have the price, you are quite willing to pay it. There are hundreds of persons like that.

“When I saunter off on excursions to these distant lands, I usually am in possession of a number of orders from museums and private collectors as well as a list of butterfly stock needed for my own store. I have often found myself commissioned by a museum, either American or European, or even a university, for that matter, to get a certain specimen and find that days and days of vigorous search prove futile.

“Hunting butterflies is not like stalking elephants or lions. The habitats of butterflies are concealed and not apparent. There are no tracks to take up. Their trails are subtle and imperceptible. However, I do not find myself completely stranded when I reach a certain region, for natural historians before me have noted down the particular butterfly inhabitants of the locale. In my close to three decades of wandering in these far-away lands I have also discovered a number of formerly unknown specimens.

“My equipment on these expeditions for the most part consists of a net attached to a hoop about a foot in diameter. To this hoop a handle is attached. This is my ‘gun and ammunition’. But the rare butterflies and moths do not travel in herds and clusters. They must be ferreted out and run down to their lairs.

“In some vicinities I have gone into fields and in wooded areas and by the deft use of my net I have been able to capture a big quarry of butterflies of the precious genus.

These catches have been in big numbers often. At other times I have spent days trying to snare a single one.

“There have been times when I have recruited bands of jungle natives and we have resorted to ruses in trapping the butterflies. There are certain valuable specimens which never come very close to earth. They shun the lower regions.

“For this class we erect towers, sometimes fifty feet high. At night we burn a bright light at the peak of this tower. This flare attracts the butterflies and the moths and the nets do the rest. There are other times when we build large bonfires. These bring good results also.

“Before I leave any single vicinity where I have gone in quest of butterflies, I manage to engage an agent acquainted with the ways of the civilized world. I teach him how to trap these desired butterflies, how to preserve and ship them to me. This is to guarantee a source for my product throughout the year.

“Butterflies are killed by using either a solution of cyanide of potassium or cyanide gas. The individual butterfly which is to be shipped from a tropical zone to New York City is either placed in a chemically-treated envelope or packed in layers between velvet cloths in a box.

“No day passes that I do not receive a consignment of butterflies from one of my far-off outposts. I get all types of butterflies.

Of course it is only the professional collector who can determine which ones have any value. You can appreciate the necessity of this knowledge when you realize that there are more than 3,000,000 species of insects in this world of ours, with tens of thousands of species of lepidoptera already classified. Of the strict butterfly class, there are more than 20,000 species and varieties known.

“In America there are more than 650 known species of butterflies. More are being discovered all of the time. Every now and then I will receive a package from some American collector which contains a specimen never before encountered by me.

“Before proceeding to the technical treatment of butterflies, I would like to point out the stages in a butterfly’s life before it is fit to become a part of milady’s necklace or ring.

“The cycle of the butterfly’s being is one of the most remarkable shows in the world of life. I am referring to the transformation it undergoes from the egg to the caterpillar, then changing* into the chrysalis and finally emerging as the winged insect, to nutter among the trees and flowers.

“Now let us go on to the point where I have received a shipment from one of my tropical agencies. The specimens are unpacked and then we proceed to mount them.

“In mounting butterflies we use what is known as a setting-board or setting block. This is a piece of wood with a groove down the center of its upper-side to permit room for the body of the butterfly. A pin is thrust through the thorax of the butterfly, which is midway between the wings, and the insect is placed on the setting-board.

“Then the wings are brought to the level of the upper-surface of the board, after the body of the butterfly has been inserted in the groove. The wings are further placed in position with setting-needles, which consist of match-sticks with ordinary needles inserted at one end.

“Next slips of tracing muslin or paper are placed over the wings and fastened down by pins. The setting-needles which were used to keep the wings in place temporarily are removed and then the setting-board is placed in a box with others to dry.

“After two weeks the butterfly is ready for the next operation. It is prepared for the art work. The shades and hues are selected by the artists for the particular design and object to which it is to be dedicated.

“Samples of my work are to be found in the White House today. Not only have millionaires and social leaders of this country been among my most ardent customers, but a great number of my butterfly art objects may be found among the heirlooms of European royal families.”