This is a pretty funny article about what gives a man courage and what makes him a hero. The real gem however, is the Courage Quotient Quiz. This asks a series of ridiculous questions that seem to have nothing to do with “courage” or “heroism”.

Here are a few examples of statements from the quiz that a man with courage would agree with:

Here are few statements that reflect poorly on your courageousness:

The one thing I can’t understand is why is a detective story courageous, but a cowboy movie is not? Would it be the same if it was a detective movie and a cowboy story?

Take the test for your self to find out if you’re a real man or a whimpering pansy. 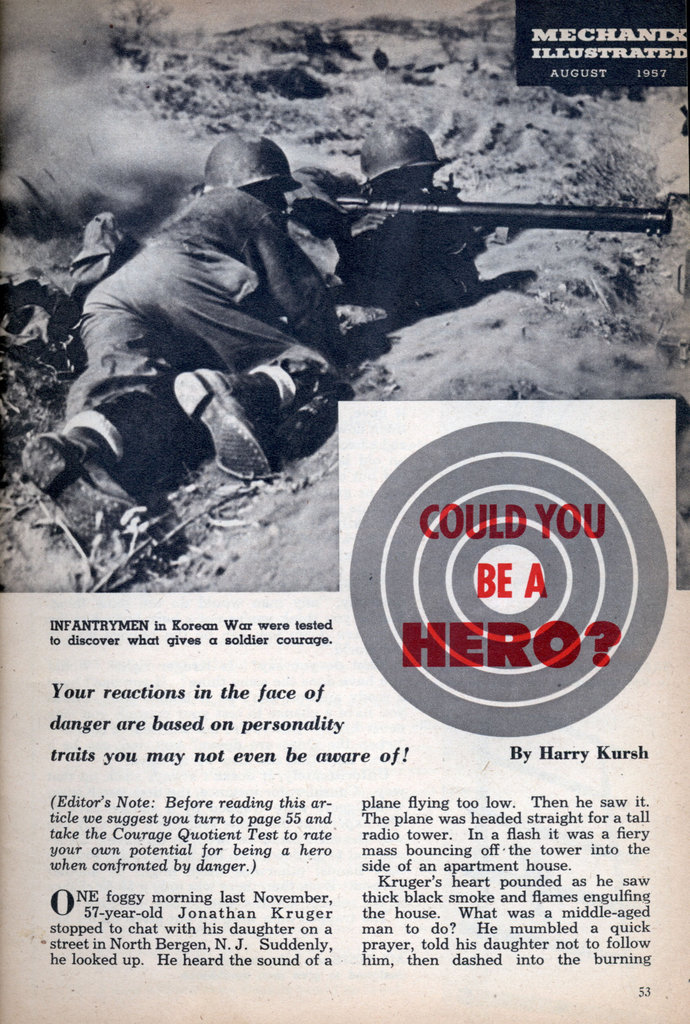 Could You Be A Hero?

Your reactions in the face of danger are based on personality traits you may not even be aware of.

(Editor’s Note: Before reading this article we suggest you turn to page 55 and take the Courage Quotient Test to rate your own potential for being a hero when confronted by danger.)

ONE foggy morning last November, 57-year-old Jonathan Kruger stopped to chat with his daughter on a street in North Bergen, N. J. Suddenly, he looked up. He heard the sound of a plane flying too low. Then he saw it. The plane was headed straight for a tall radio tower. In a flash it was a fiery mass bouncing off the tower into the side of an apartment house.

Kruger’s heart pounded as he saw thick black smoke and flames engulfing the house. What was a middle-aged man to do? He mumbled a quick prayer, told his daughter not to follow him, then dashed into the burning house. He raced up to the top floor where he heard the cries of two children behind a locked door. Desperately Kruger battered the door until it gave, grabbed the two children and brought them down to safety. Without hesitation he went right back into the smoke-choked halls and found an old lady lying on the floor. He tried to lift her but couldn’t. His own strength rapidly waning, he grabbed her by the arms and dragged her until he passed out.

Luckily Kruger was rescued and revived. Next day he was asked: “Why did you do itâ€”a man of your age? Why didn’t you wait for the police and firemen to arrive?”

“Under similar circumstances,” Kruger replied modestly, “any man would do the same thing. Maybe you think you’re not a hero but when the chips are down you can be the bravest man in the world.”

What do you say? Is Kruger right? Would you have done the same thing? If you don’t have a ready answer, don’t let it bother you. Unless you have a chance to test your courage you may never know. But you’re not worried, of courseâ€” “when the chips are down,” you, too, can be a hero. Isn’t that the idea we all have?

Unfortunately, it doesn’t always stack up that way. Consider, for instance, the time two Kansas well-diggers were trapped by a sudden cave-in. The experts at the scene said there was only one way the men could be brought up -alive. Someone had to go down into the hole and dig with his bare hands; otherwise there might be another cave-in. Even then there was only a 50-50 chance of the rescuer and the men getting out alive.

The trapped men were all but given up for lost when a school janitor in his 50s volunteered to attempt the rescue. He crawled down the hole and dug by hand for hours, finally saving the two men with only seconds to spare before the well caved in again.

Why was the school janitor the only brave man around? Do some of us have built-in yellow streaks? In my search for the answers I spent weeks pouring over a number of scientific reports and studies of known heroes. I talked with scores of experts in every related field, from the armed forces to police chiefs and psychologists. No two experts can give you the same definition of courage. But on this they all agreeâ€” there’s no such thing as a born coward or a natural hero. Nor is it true that anyone can be a hero! As a matter of fact, some experts believe that most of us would , shrivel up in the face of danger.

Shocking? Not to a man like S. L. A. Marshall, a former Army brigadier general who is rated as one of the world’s best analysts of army combat operations. Marshall says most infantrymen won’t “ever strike a real blow” against their enemy unless their officers and leaders constantly “ride herd” on them. He estimates that even among seasoned troops you can expect 75 per cent of the men “will not fire or will not persist in firing” against the enemy. “These men,” he says, “may face danger but they will not fight.”

But if a man is not born brave, can’t he be taught to have guts? That’s a lot of bunk, too, according to world-famous psychiatrist Dr. Joost A. M. Meerloo. Remember the howl that was set up when some newspapers ran photos of men in the armed forces undergoing real torture at a “survival school” to learn how to resist brainwashing?

“Ridiculous,” Dr. Meerloo called it. “A man cannot be forced to become a hero.” He adds, “The hero at school can become a weakling as soon as he is faced with the real challenge.”

Dr. John Dollard, who interviewed hundreds of combat heroes starting with veterans of the Spanish Civil War right up through World War II, says 85 per cent of them had admitted to having been frightened. “Only a fool,” says Dr. Dollard, “is not afraid if there is something to fear.” His advice? Don’t suppress fear. Deal with it intelligently, openly, even crack jokes about it.

Actually, psychiatrists have no exact means by which they can determine in advance whether you’ve got the makings of a hero or whether, faced with a dangerous situation, you turn tail and run. But ever since World War II and the Korean conflict the subject of what makes a man brave has come under intensive scientific scrutiny.

When I got to Washington, D. C. in my quest for talks with experts, I ran into one of the most unique research projects ever undertaken in the history of fighting men. The project is now in its final testing stages but it began when a team of Army researchers, including several leading psychologists, went into the battle zones of Korea from May 13 to June 30, 1951.

Armed with questionnaires and tape recorders they interviewed more than 5,000 combat infantrymen, often with shells flying overhead. A second team

went back later to conduct a similar study, this time covering some 2,000 front-line men. Their aim was to find out what made some men “combat desirables” and others “combat undesirables” and then come up with some kind of test by which the armed forces could pick the best combat men in advance. You might say the experts were after a “hero prediction” testâ€”although that is a term they frown upon.

The Army doesn’t want heroes necessarilyâ€”just combat soldiers who won’t shrivel under fire, who won’t drop their guns and run for cover while their buddies are shooting back. Can a test pick out these fighting men in advance? Yes, say the experts, because we all react according to our total personalities.

Just what the test will consist of is a guarded secret. The Army doesn’t want anyone wiggling out from under. But studies so far show that the man who stands up best under fire has these elements in his personality and background:

1. He was active in body contact sports. 2. He loves the outdoors. 3. He doesn’t mind being alone. 4. Without being blustery, he has self-confidence. 5. He can think fast and make fast decisions. 6. He likes to do a lot of things and is always busy. 7. He has respect for social obligations and a sense of responsibility.

Does this mean that someone with all these qualities in his personality is a surefire candidate for the Medal of Honor? Definitely not. Psychology, unlike mathematics or chemistry, is not an exact science. You can’t always add up two and two in a human being and get four. But you can usually come up with a pretty good batting average and that’s what the Army’s psychologists are hoping for.

TEST YOUR COURAGE QUOTIENT
Here is a sample of a test psychologists use to help determine your potential for being brave when faced with danger. Check whether you agree or disagree with each of the following statements. Answer each the way you really feel, not the way you think you should feel. After completing the test, see the scoreboard at the end of this article for your total number of points and your Courage Quotient.

1. Any man should love camping and hunting
2. Only a sucker goes out of his way to help people
3. It’s more exciting to be a bank clerk than a lumberjack
4. Practical jokes are fun
5. I would like to be a skillful mountain climber
6. I wouldn’t like a job with irregular hours
7. A man should get tough when people pick on him
8. A man who is good at making outdoor fires should be admired
9. Bad weather always annoys me
10. Most people are essentially selfish
11. A man should be loyal to his friends, whether they are right or wrong
12. Nobody should work hard if he can get away with it
13. A totalitarian system of government is more efficient
14. Always follow the rules if you want to get places
15. A boy who likes pets grows up to be a better man
16. A cowboy movie is more interesting than a good love story
17. A man who spends his money too freely is a fool
18. A man who seldom boasts should be admired
19. I would get enjoyment from any job if I did it well
20. Desk work is more for a woman than a man
21. I’d rather read a detective story than a humorous story
22. A foreigner can’t think or act as fast as an American
23. After most wars, the U.S. came out the loser in the peace treaties
24. A man without close friends would be lonely

COURAGE QUOTIENT SCOREBOARD
Match your answers on the Courage Quotient Test with the scores given below. Then add up your total number of points.

Your total score___
If your score is above 180 your Courage Quotient is excellent. From 180-140: average. If your total score is below 135 your potential for being a hero when confronted by danger is poor.