You probably need to attract a lot of listeners-in to earn that four-figure income! 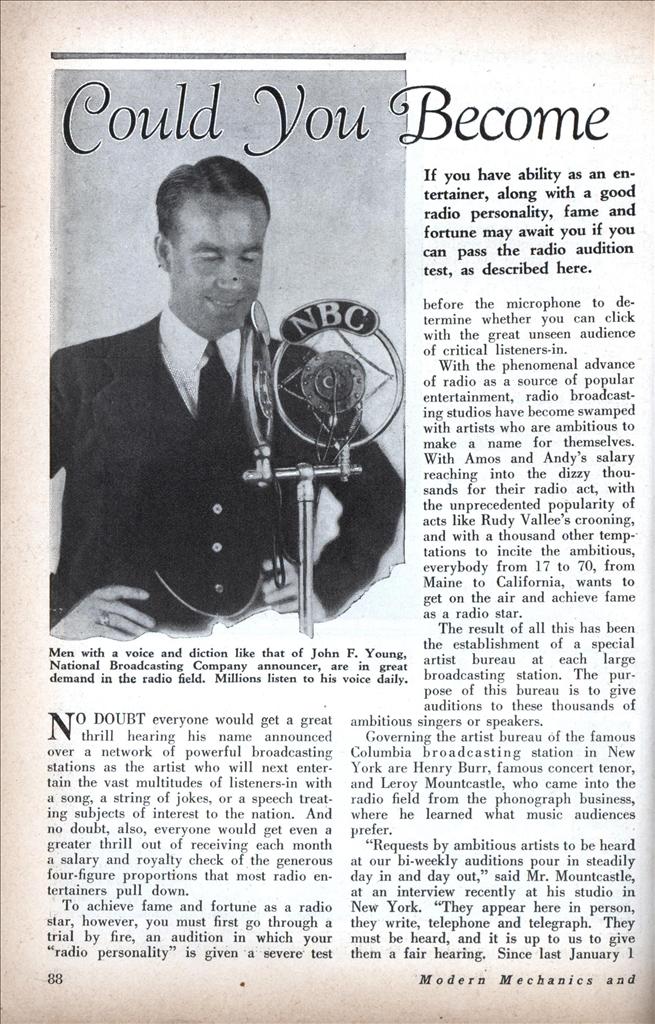 Could You Become a Radio Star?

If you have ability as an entertainer, along with a good radio personality, fame and fortune may await you if you can pass the radio audition test, as described here.

NO DOUBT everyone would get a great thrill hearing his name announced over a network of powerful broadcasting stations as the artist who will next entertain the vast multitudes of listeners-in with a song, a string of jokes, or a speech treating subjects of interest to the nation. And no doubt, also, everyone would get even a greater thrill out of receiving each month a salary and royalty check of the generous four-figure proportions that most radio entertainers pull down.

To achieve fame and fortune as a radio star, however, you must first go through a trial by fire, an audition in which your “radio personality” is given a severe test before the microphone to determine whether you can click with the great unseen audience of critical listeners-in.

With the phenomenal advance of radio as a source of popular entertainment, radio broadcasting studios have become swamped with artists who are ambitious to make a name for themselves. With Amos and Andy’s salary reaching into the dizzy thousands for their radio act, with the unprecedented popularity of acts like Rudy Vallee’s crooning, and with a thousand other temptations to incite the ambitious, everybody from 17 to 70, from Maine to California, wants to get on the air and achieve fame as a radio star.

The result of all this has been the establishment of a special artist bureau at each large broadcasting station. The purpose of this bureau is to give auditions to these thousands of ambitious singers or speakers.

Governing the artist bureau of the famous Columbia broadcasting station in New York are Henry Burr, famous concert tenor, and Leroy Mountcastle, who came into the radio field from the phonograph business, where he learned what music audiences prefer.

“Requests by ambitious artists to be heard at our bi-weekly auditions pour in steadily day in and day out,” said Mr. Mountcastle, at an interview recently at his studio in New York. “They appear here in person, they write, telephone and telegraph. They must be heard, and it is up to us to give them a fair hearing. Since last January 1 we have had 2000 auditions, with about 100 applicants at each hearing.”

Mr. Mountcastle then led the way to the audition quarters, the trial chamber where the applicant for a place on the air and a handsome salary goes through with his or her act. This chamber is a large, specially constructed room, with acoustic qualities as near perfect as possible. In one corner there is a piano on which reposes a vase of flow-firs. This gives a psychological touch, Mr. Mountcastle explained. An attempt is made to make the grim chamber appear cozy and benevolent, and not bare of all humanness.

Close to the piano is the microphone. It Stands there so menacingly that one is reminded of the sword of Damocles hanging over one’s head. There is no other instrument or furniture in this hall.

From here one passes into the control-room. It is here that the judges sit in solemn conclave and pass on the talents, or lack of them, of the person before the microphone.

A window has been installed in the wall separating these two rooms in order that the judges may glance through every now and then and behold the artist’s stance before the microphone, while he listens to the voice over the loud speaker installed on his desk.

“How do we know the microphone voice? Reasonably enough,” explained Mr. Mountcastle, “we have to get it over the microphone. We look first for smoothness and clearness of sound. There has to be a fine tone quality and clear diction. We have to watch and see if the voice has an edge, which breaks and causes the most uncomfortable feeling to the listener. In other words we must beware of the cracked voice.

“Our worst enemy in these radio trials is the fear complex. Sometimes during the tryout I notice that the artist is nervous and actually frightened. He seems to think the mike is going to attack him on the slightest provocation. Over the supersensitive microphone this nervousness of tone is registered in all its imperfections.

“One cannot detect a good radio voice in ordinary conversation; one can only judge it by hearing it over the air. The moment a prospect opens his or her mouth before a microphone we know whether they have a radio voice. A flop voice on the air is just as noticeable over the loud speaker in our audition room as is a bicycle pump voice on the talking screen. Often we press the buzzer after we have heard a single line. It’s no use wasting anyone’s time.

“But everyone gets a fair hearing at the radio audition. Every broadcasting company is on the look-out for first-rate talent. Radio artists of the first water are rare. Out of 200,000 applicants we got only 12 persons. But they were the best to be had, and their financial returns have been commensurate with their ability. Take Maurice Chevalier, for instance. We paid him $15,000 for four songs once.

“Lastly we have to seek out radio announcers. Geniuses like Graham MacNamee are rare. Radio broadcasting companies are in the market for them all the time. He must be able to carry out such a speech as the following without a hitch: “‘. . . Among other prominent musical directors you will hear our Gustave Haenschen and his orchestra, the Detroit Symphony, under the direction of Ossip Gabrilo-witsch, featuring Jascha Heifetz and Fritz Kreisler as guest soloists. Ignace Jan Paderewski will accompany a concert featuring the phenomenal youngster, Jehudi Menuhin, while Ernestine Schumann-Heink will sing the “Erl King” of Franz Schubert. The fiery Russian, Peter Illitch Tschaikovsky, with selections from the “Oiseau de Feu” and the “Symphony Pathetique”.’ “If a person with announcer ambitions can weather his way through that storm, we figure he can navigate his course in any crisis, except, of course, at prize-fights. We can’t keep him from getting excited and stuttering and sputtering out the ring action.

“Yeah. Everybody wants to get on the air. There’s good money in it, Amos and Andy will tell you. But passing the radio test is no cinch, not by a long shot.”