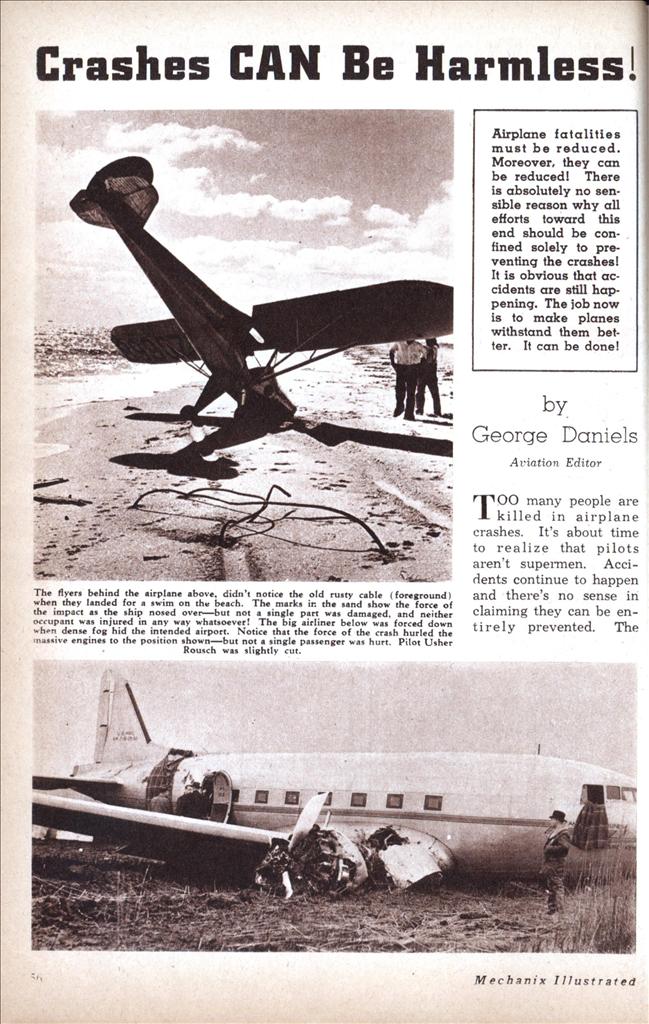 Crashes CAN Be Harmless!

Airplane fatalities must be reduced. Moreover, they can be reduced! There is absolutely no sensible reason why all efforts toward this end should be confined solely to preventing the crashes! It is obvious that accidents are still happening. The job now is to make planes withstand them better. It can be done!

TOO many people are killed in airplane crashes. It’s about time to realize that pilots aren’t supermen. Accidents continue to happen and there’s no sense in claiming they can be entirely prevented. The only intelligent thing to do is to build the planes to withstand as violent a smashup as Possible.

Six years ago Lou Reichers was flying a big twin engine, fuselage-lift transport invented by V. J. Burnelli, when the ailerons came off over Newark Airport. There wasn’t anything wrong with the design of the plane. It was just one of the things that sometimes happens to a test ship. A handful of bolts had been left out of the control hinge brackets during the assembly job. The result was a crash at 2 miles a minute. The big ship hit the ground so hard that one of the engines landed about 200 yards away.

It was the thirteenth of January when it happened, and the ground was frozen as hard as a brick, but the wreck plowed a ditch big enough to hide a whale in. Every aviation engineer on the face of the earth should have wanted to know how the ship’s cabin managed to come through that crash in perfect condition. As a matter of fact, Reichers and the engineer who rode with him, John Murray.

walked out of the ship for a smoke as soon as it stopped plowing up the earth. They might as well have smoked inside because the gas tanks hadn’t even sprung a leak.

That ship was an unusual design. It had a broad, flat fuselage shaped like a wing. Inside there were seats for 16 people. Both engines were located in the nose of that single body, with the pilot’s compartment behind them. The total weight of the thing was a little over eight tons—with about 1,500 horsepower to pull it. The lines were pretty clean, even by today’s standards, giving a top speed of 250.

The cross sectional dimensions of the fuselage were so generous that the amazing strength was almost easy to attain. Extruded dural beams and channels gave the cabin the toughness of a young railroad bridge. The position of the engines in the nose eliminated the likelihood of their smashing anything but themselves when the plane hit head first. And that’s about all they did smash—the windshields right behind them didn’t even crack when the ship crashed.

The fact that Reichers and Murray weren’t killed is easy to understand when you see a Picture of the pilot’s compartment and passenger cabin. The worst effect noticeable is the mud on the windows.

When the cabin of a plane stays in one piece the passengers stand a chance in any crash. Usher Rousch proved that pretty conclusively three years after the Burnelli wreck. He was coming in from Chicago to land at that same field in Newark. The fog was so thick you couldn’t see both ends of a cigarette—and there wasn’t a hole in it anywhere.

Rousch didn’t relish the idea of slamming a plane load of passengers into the side of a hangar in a blind search for the runway, so he headed for the swamps around the airport He hit the mud so hard that the engines doubled back under the wings, but the cabin stayed in shape. The result proves the point once more. Not a single passenger was scratched. Rousch, himself, was the casualty list. He got a few cuts from the jolt.

Private planes bring out the importance of a strong cabin every now and then, too. A pair of sport flyers looking for a good beach to swim from, made a good example about a year ago in Florida. They came down to what looked like a beautiful spot to land and swim. The trouble was that they didn’t notice a tangle of old. rusty cable imbedded in the sand. Their wheels had no sooner hit the surface than they jammed into the cable and whacked the ship over on its nose. Nothing buckled up, and nothing bent. The little bus was well made. Even the propeller didn’t break—that was almost freakish, however. Later on they pushed the tail down again, took off, and flew home. Ironically, the name of the pilot in that sandy mishap was Beech.

The scene down at Lovettsville, Virginia, last year gives a pretty clear picture of a passenger cabin in fragments—with 25 dead, United States Senator Lundeen among them. That ended a 17-month death-free record for the airlines, and proved again that whether you like it or not, accidents do happen. Although nobody will ever know just what happened to that ship, it doesn’t take an expert to see that the cabin went to pieces like the rest of it.

It was only about six months later when Captain Eddie Rickenbacker startled us all by being a victim in the wreck of one of his own airliners. That crash should show what happens when only part of the cabin breaks up. Only part of the passenger list met death that night; seven at the time. Eight were injured. Captain Rickenbacker was lucky enough to come out alive, though badly hurt.

Airplane designers might take a tip from the railroads. A good many of us can remember the days when the railroads used wooden cars. When those cars got into a wreck casualties ran high and the sight was pretty ghastly. Today railroad cars are of steel, and they stay together well in most any collision. Railroad wrecks don’t take many lives now.

It’s the same with automobiles. Remember when they used to scatter all over the street when they hit something? They don’t do it now. Ruggedly reinforced metal bodies hold their own even in violent accidents. Modern cars can roll over and up on the wheels again, and drive away with loads of disconcerted but unscathed passengers.

Movie stunt men could tell the airplane engineers some interesting things about safety, too. Most designers don’t expect the pilots of their planes to dive into the ground deliberately, or to try to crash in as spectacular a manner as possible. The movie boys do it, though. And ‘ what’s more, they seldom get hurt doing it. Their method is just about the same as the one that saved the day for Reichers and Murray when the big Burnelli crashed. They reinforce the cabin or cockpit, as the case may be. Then, no matter what happens to the rest of the ship, the part they’re sitting in holds up.

In the days of wooden fuselage construction, these daredevils added wooden reinforcements to the longerons and cross members around the cockpit. The entire cockpit structure was then heavily taped to prevent slivers of wood from impaling the pilot in the event of an unexpected fracture. Modern crackup artists reinforce with steel tubing.

It might be wise if designers didn’t get one-track minds. Passenger planes go fast enough for the time being. Let’s see if we can build them to withstand crashes a trifle better. There’s little use in trying to prevent crashes altogether, so why not try to make them less fearful.

The war should turn up a few tricks along this line that even the Hollywood stunt men haven’t been using for years. But if it doesn’t, there are still examples to profit from. Planes should be designed so they can take a good crash. Research departments can easily boast that they have developed instruments and gadgets that make crashes entirely avoidable. They can add these things to the pilots’ compartment until the walls are cluttered up with them from top to bottom. They can evolve all manner of flapping, fluttering doo-dads that pop out of tails and wings and accomplish some purpose or other. For the most part, these things work quite well, but most of them need considerable attention from the pilot. When something unforeseen happens you can’t blame the poor pilot for making a little error. If you sat for hours in that wild array of levers, handles, buttons, gauges, and lights, you’d probably make a little error now and then, too. More gadgets won’t prevent accidents. The speedometer hasn’t stopped automobile accidents. Steel bodies, however, have reduced the injuries.

The pilot knows how to crash his ship on a wing to cushion the impact if he has time to think about it. It’s up to the engineers and designers to build the ship so the pilot and passenger compartment will stand up as the rest of the ship squashes. At the present time the pilots are in a pretty hopeless spot when a crash comes. The passengers aren’t much better off.

If you feel foolish sometime, drop your glasses on the sidewalk. They’ll break. If you drop them on the rug they won’t. That quarter-inch of cushioning is enough to save them. That’s why a pilot in a jam may try to come in on a wing. It breaks the fall. That’s also why some planes have crash pads on forward cabin walls to save the occupants. Let’s think about all this. We can save lives in the future that might have been saved in the past.