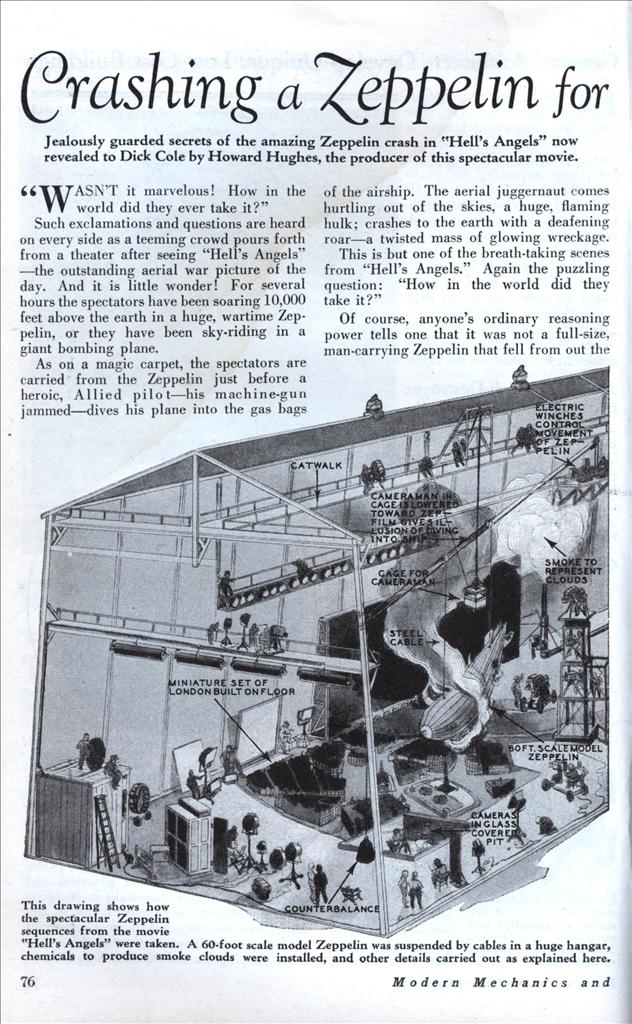 As on a magic carpet, the spectators are carried from the Zeppelin just before a heroic, Allied pilot—his machine-gun jammed—dives his plane into the gas bags of the airship. The aerial juggernaut comes hurtling out of the skies, a huge, flaming hulk; crashes to the earth with a deafening roar—-a twisted mass of glowing wreckage.

This is but one of the breath-taking scenes from “Hell’s Angels.” Again the puzzling question: “How in the world did they take it?”

Of course, anyone’s ordinary reasoning power tells one that it was not a full-size, man-carrying Zeppelin that fell from out the skies. But, to believe so, is no more erratic than to believe the know-it-all, wise guy, who tells you in tones of belittlement: “Huh! It was just faked! I know! That was just a toy balloon that they used.”

Both beliefs are wrong. It was done by scale model photography. This is not comparable at all to the crude miniature stuff that is injected from time to time in pictures, and which often changes a tragic situation into a comic farce. Nor are scale models employed solely to keep down production cost. The primary purpose is to put across a scene with greater realism and finer photographic values. The use of scale models should not imply belittlement.

In producing “Hell’s Angels,” it was entirely within the range of the pocket-book of the producer, Howard Hughes, to buy and to wreck a full-size Zeppelin. But, even so, the film record would not be comparable with that recorded with the use of the scale model. In the latter case, the entire set was under the complete control of the director; the set was lighted to give the best photographic values; close-up shots of the Zeppelin falling in flames and its ultimate crash to the earth were taken with precision; all of which would have been impossible if a full-size airship were used, to say nothing of the hazard to life and property.

To produce the Zeppelin scenes, Mr. Hughes gathered about him a staff of the cleverest technicians in the United States. A model Zeppelin was built—an exact replica of a German, wartime dirigible. This was built to a scale of one foot equals one inch. So the model was approximately 60 feet long and 6 feet in diameter. Quite a sizeable “miniature”! Even the framework followed closely the true Zeppelin design.

The huge dirigible hangar at Arcadia—-adjacent to Los Angeles—was leased from the government, and in this building all the scenes of the Zeppelin were shot. Lights giving millions of candle-power were installed. Miniature sets were laid out on the floor to give suitable back-ground for vertical shots of the “Zep.” Chemical apparatus was installed to create clouds. A steel cable was stretched from one corner post to the middle of the opposite wall. The Zeppelin was suspended from a trolley which traveled on the cable. It could move along the cable about four times its length. Other cables permitted the Zeppelin to be raised or lowered at the will of an operator at an electric winch. Runways—or balconies—completely around the inside walls of the hangar, were vantage points for the numerous cameras. In addition, portable, parallel platforms could be moved anywhere on the floor. A cat-walk near the roof of the hangar was utilized for vertical shots.

In presenting the picture on the screen, the Zeppelin makes its first spectacular appearance emerging from a fleecy, cumulus cloud. The clouds are seen to roll back as the nose of the airship pushes through. This is a close-up shot, and so real that it seems the Zeppelin must leave the screen and soar into the auditorium of the theater.

How was it done? The Zeppelin is at the end of the cable farthest from the camera. Immediately in front of the airship a dense cloud of “liquid smoke” is released. This is the chemical used for laying down a smoke screen or for “sky-writing.” This gas remains as a gaseous mass for some time before diffusing into the air. The Zeppelin is slowly drawn through this “smoke.” Vivid lighting effects reproduce the smoke as a cumulus cloud.

Next, the spectator is permitted to ride in the “Zep” and see its inside workings; the skeleton framework; the gas bag; the power gondolas.

The motors are running—real motors. One sees the rocker-arms rock, and hears the clicking tappets. On the model Zeppelin, the propellers are turned with quarter H.P. motors. The interior sets of the Zeppelin were built full size.

The “Zep” cruises on its way. London is its objective. A member of the crew is lowered thousands of feet in a gondola suspended by a slender cable to get their bearings. The object is to drop bombs on Trafalgar Square. The observer revolts at bombing a sleeping city. He telephones misinformation to the Zeppelin, and the bombs drop and explode harmlessly in a lake. But the Allied flyers are aroused. They take to the air in their fighting planes to battle the Zeppelin. A terrific aerial battle rages. The “Zep” fights off all planes — but one. This one climbs high above the Zeppelin. The pilot’s machine-gun jams. In heroic desperation, he dives his plane into the vitals of the Zeppelin. The giant dirigible buckles up with a broken back and bursts into flames.

How was it done? Part of this scene is a sample of exceptionally clever double exposure. A drawing explains. First, a miniature airplane is swung from a wire against a flat black back-ground. This is shot with a high-speed camera—about ten times normal. When reproduced at normal speed, this would represent a full-sized plane in the distance taking a power dive of several thousand feet.

The undeveloped negative of the miniature plane is rewound into the camera magazine, and a shot of the Zeppelin, moving slowly, is recorded on the same film. The composite picture is shown in the enlarged frame. The moment the airplane hits the Zeppelin the film is “cut,” and the sequence of the picture is resumed when the Zeppelin is fired.

During part of the heroic dive toward the Zeppelin, seemingly the spectator is riding in the plane. This illusion was created in the hangar. The Zeppelin was suspended about half way between the roof and the floor, and the camera-man was lowered toward it. A miniature, pictorial set on the floor gave a suitable back-ground; the high-speed camera did the rest.

Now comes the big, breath-taking scene— the fall of the flaming Zeppelin. To make sure of suitable film, fourteen cameras shot the scene.

The covering of the gas bag is sprayed with kerosene. Everything is ready. Comes the director’s cry: “Camera!” A special prop in the “in’ards” of the “Zep” is jerked out. The dirigible sags in the middle, and then bursts into flames. All the cameras are in action. The man at the electric winch slowly lowers the flaming hulk. It passes into and out of the range of the cameras. When the flaming wreck is about eight feet from the floor, it is dropped with a crash. To make the falling act very vivid, a pair of cameras are in a pit in the floor covered with plate glass, and shoot the vertical fall. And the fall of a burning Zeppelin from the skies is a celluloid record. In the cutting room, the best of the shots are compiled into the finished film which the spectator sees on the screen.

Be it said that all those in the hangar during the “fire” were not sorry when it was all over. The camera-men up on the cat-walk had no occasion to take a Turkish bath for six months.

“Hell’s Angels” is an outstanding example of the far-reaching possibilities of the model technician’s art. Because a real Zeppelin was not used, and the crew not incinerated in the fire, should not detract the spectator’s interest in the picture. In the wild and wooly “westerners,” one knows that the Indians are not really shot off their mustangs. But if they tumble off and “bite the dust” in realistic fashion, the spectators howl their delight.

For realism, “Hell’s Angels” stands out alone in its class.