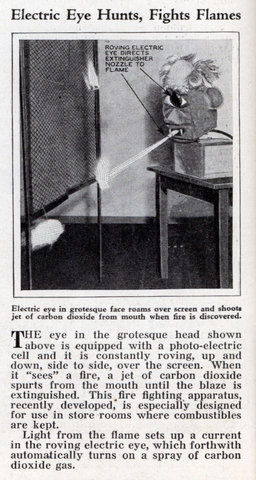 Electric Eye Hunts, Fights Flames
THE eye in the grotesque head shown above is equipped with a photo-electric cell and it is constantly roving, up and down, side to side, over the screen. When it “sees” a fire, a jet of carbon dioxide spurts from the mouth until the blaze is extinguished. This fire fighting apparatus, recently developed, is especially designed for use in store rooms where combustibles are kept.

Light from the flame sets up a current in the roving electric eye, which forthwith automatically turns on a spray of carbon dioxide gas.