Modern Mechanix
Issue: Feb, 1931
Posted in: How to, Movies
No Comments on Creating Illusions for the Talkies (Feb, 1931)

Creating Illusions for the Talkies (Feb, 1931) 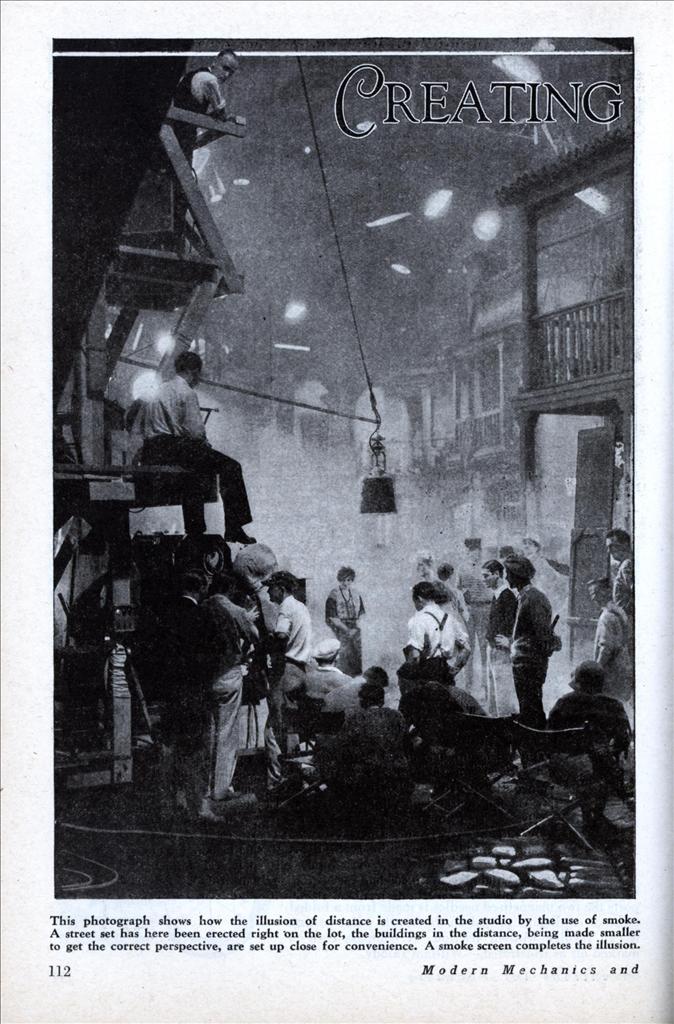 Creating Illusions for the Talkies

You can’t believe everything you see in the talkies, and it’s a bit of luck for you that you can’t; for these illusions lower production costs and help keep the admission price within your reach.

“IF THE mountain will not come to Mohammet, Mohammet must go to the mountain.”

“But, most noble prophet, it costs too much to go to the mountain.”

“Then we’ll fake a mountain right here in the studio.”

Faking mountains, or anything else you can think of, is now easily accomplished by what is known as Dunning Process Shots. This method has done more than any other one thing towards putting talking pictures within reach of the masses. By this process, a cameraman is able to turn out films that show upon them things that the camera eye never actually saw. Production costs have been cut in half by this method, since portions of costly sets can be eliminated simply by matting in on the negative whatever is needed.

Hardly a single talkie has been released that has not made use of this process. The method is a difficult and painstaking one and numerous tests are necessary before the scenes will pass muster. Aside from cutting down expenses, there are many scenes that cannot be shot “as is.” For instance, it is impossible to shoot night scenes showing stars.

Any talkie showing stars has made use of the Dunning Process shots, which is a tedious method of covering a portion of the lens and matting in the desired background with stars overhead. This is doubly difficult with the advent of talking pictures, because it cannot be imperfect in any way. In silent pictures, if a few feet of the negative were distorted, the cutter destroyed the faulty portion and patched the negative to hide the missing part. Now, not a foot can be cut because even a misplaced or lost syllable would gum up the recording of the whole scene.

In order to make stars in a night sequence, tests are made of the scene, and the sky is blotted out by the simple method of covering the lens in that particular spot on the negative as is done in ordinary double exposures.

An artist now takes the test shot of the scene and measures exactly how much and where the film was covered while shooting. Next, a studio artist makes a black and white painting of the sky with a few clouds and in all probability the moon. With the painting completed, he then pricks holes through the canvas, which is placed in a stationary frame used for the purpose and set about three feet from a camera, which has been mounted on a concrete column to insure it against vibration and to have it always in readiness for use.

Fifteen or twenty feet behind the framed canvas is a board covered with strips of tinsel, arranged so that one end is loose. An electric fan is turned on the tinsel so that the loose strips wave back and forth and a strong light is placed between the tinseled board and the frame holding the canvas. The light coming through the pinholes photographs like twinkling stars.

By matting, location costs are cut in half. If a scene is supposed to occur in a valley,

with mountains in the background, the artist is called in to mat in the required scenery.

William H. Dietz, ace of moving picture trick cameramen, has been responsible for many spectacular process shots. He is a licensed aviator, having learned to fly in order to be able to take desired sequences from the air. He found it impossible to tell another pilot just when to tilt his plane for the shots he wanted. Since he has learned to fly, he has had a camera mounted on the wing of his plane and equipped with an automatic release. When he gets the angle he wants, he pushes the button on his instrument board and the scene is recorded. For certain sequences in “What a Widow,” Dietz spent five nights flying over the Pacific Ocean in order to get certain light effects on the water. A number of scenes are laid in the Dornier plane. Dietz secured the needed background and with the use of a small model of the Dornier he shot the sequences in the studio. The model was about two feet long. In the place of motors, it had small circles of isingglass. When the plane was moved about, the reflections op the circles looked like motors whirring, and the scenes were quite effective.

Painted mats were used for the backgrounds.

The same method was used in shooting the sequences of the Ille de France in mid-ocean. An exact model of the great liner was made which was about seven feet long. It was placed on the studio pool and waves were generated by immense paddles and by means of a small tube run up through the bottom of the model, smoke was forced out the funnels. The background of sky and waves was matted in and on the screen it looks as if the model were the great He de France in mid-ocean.

For the interior shots in the plane in this same picture, the Dunning Process was used. Two films were placed in the camera, one of them amber-colored, the other one blue. The interior of the plane was painted in different shades of amber and the back-drop outside was painted a brilliant blue. When the scene was filmed, the blue canvas outside the open windows of the plane did not register on the negative, being neutralized by the blue film in the camera. The actors wore a heavy amber make-up for these’ scenes and amber lighting was used to intensify the coloring of the set and the actors.

After such a scene is filmed and recorded, a test is made of it and this strip is given to the artist to compute the exact place on the negative where it is to be matted. Now, the film is placed in the camera and the lens is covered over the portion of the negative that was first exposed. The canvas on which was painted the background is now photographed. It usually takes about three days to achieve the desired result and dozens of tests are made before the negative is completed satisfactorily.

A number of scenes were required in this same production showing the Grand Central station in New York and also the business district and sky line of New York. Dietz flew to New York, shot the background and matted it in behind the railroad scenes shot in Los Angeles, thereby-saving the studio and Gloria Swanson the wear and tear and needless expense of taking the cast to New York and back.

With the aid of a prism lens, Dietz also introduces some spectacular scenes and titles for the Swanson production. A prism lens refracts a scene in the same way that a prism refracts light. Dietz shot a scene of a pair of hands playing on a piano and the prism lens recorded it as if there were six keyboards on which six pair of hands were playing, an unusual and striking effect.

He made the ballet scenes in “Paris Bound” with an ordinary lens in the same way that double exposures are made, by covering a portion of the lens and then exposing it later. Eighteen exposures were made. Standard size film is 32mm. wide. It can readily be seen how difficult it would be to compute exactly where the lens should be covered and where the actors should be placed on the set to prevent overlapping.

Miniature effects, which are another specialty of William Dietz, are secured through covering a portion of the lens and exposing the negative by degrees. Such scenes as those showing a man standing on the palm of a girl’s hand or a ballet girl sitting on the rim of a wine-glass are secured through double and triple exposures.

Wherever there is no motion on that part of the negative, matting can be done for a very small expenditure. It is used in practically all interior sets. Ceilings of ballrooms are almost always painted and matted in. So are chandeliers and the tops of columns and walls. The carpenters build the sets so that the walls extend several feet above the heads of the actors and the artist paints the rest. Columns are built which do not reach entirely to the ceiling and instead of wasting needless wood and finishing, the artist paints the upper portion and the ceiling. It is tedious but economical.

In theatre sets, since the faces of the audience farther back than the fifth row are always blurred, the studio does not fill its theatres with extras. Instead, the heads of people are painted in from the fifth row back. This is very simple. The artist knows where the seats in the theatre are supposed to be and puts the heads above them, row on row, and the blurred effect hides the fact that they are merely daubs of paint. In “Her Private Affair,” the immense theatre set was constructed at a nominal figure. Matting was resorted to in the matter of the boxes at the opera. The curtain was a real one, but the boxes were painted in and filled with people and the film was double and triple exposed.