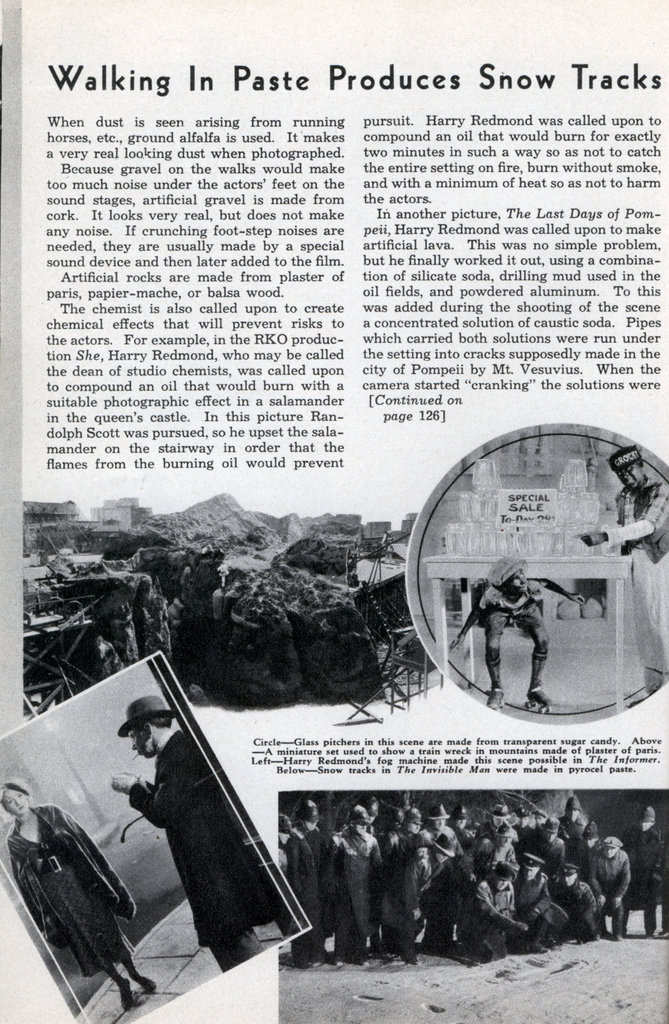 Creating MOVIES in a TEST TUBE

Cobwebs of rubber cement, ice cream from potatoes, candy windows, rain that is not wet, these and others movie chemists conjure.

IN THE motion picture world it is not possible to control nature. The movie-makers must fabricate artificial snow storms; glass that will not cut; fogs that can be controlled; bubbling, hot lava from volcanoes that are not erupting; and thousands of other things which are needed in creating movies. It is the chemist with his test tubes and laboratories who makes effects possible in great movie production. He is called upon to satisfy the various demands of the director at a moment’s notice.

To produce the effect of brisk coldness, such as vapor coming from the breath of an actor, dry ice, which is made from carbon dioxide, is placed in the mouth. Because of the extreme cold of this dry ice, the result is a mist coming from the mouth similar to the one seen in cold climates. So as not to freeze the mouth, the dry ice is placed in a container in the actor’s mouth. This same chemical “dry ice” is used in scenes where steaming tea kettles and boiling water is seen. The dry ice makes the water seem to boil.

Because natural icicles are not available in Hollywood, they must be chemically made. A strong solution of silicate of soda is made to drip from the eaves or other places where

icicles are required. The chemical in dripping gradually solidifies in beautifully transparent “icicles.” Like real icicles they are fragile and will break easily, although they do not melt under the heat of the studio lamps. Stalagmites are made of plaster of paris and coated with silicate of soda.

Triangular pieces of this celluloid are then cut up and inserted in the corners of window frames instead of the glass panes. The rest of the window is left blank so that actors may be photographed through it. Ice in the motion picture is usually paraffin.

Within a few minutes the chemist may be called upon to produce a snow storm. He goes to a storeroom and drags out several large burlap bags of potato chips. These potato chips are very thin, white, and flaky, and look like real snow unless taken in the hand. The potato chips produce a very light, lazy snow storm effect, while unroasted white corn flakes produce a heavier snow that falls more rapidly. Hail is produced by puffed rice.

To produce a snow storm effect, a number of technicians take the corn flakes above the setting on the “cat-walks,” and sprinkle them down in the desired quantities and places. Wind machines are often used to add to the effect. When snow is seen on actors’ clothing, ground chicken feathers or cornflakes are placed on the dampened clothing. When it is necessary to photograph foot steps in snow such as appeared in the recent Invisible Man, or in other snow pictures, the ground is covered with pyrocel. To lay this pyrocel, a paste is made and then the paste poured over the ground. This sets into a semi-brittle layer, and the actors in walking through this leave foot marks.

In mystery pictures cobwebs are almost always used. Artificial cobwebs are made from a mixture of rubber cement and Fuller’s Earth. This mixture is then put in a special machine which forces a fine stream through a jet which solidifies into a thread. At the same time the machine in the hands of an operator blows the thread to the desired places. Artificial cobwebs are fine and silky, and would even fool the spiders themselves.

Dust on broken furniture is usually Fuller’s Earth. Fuller’s Earth is also used in explosion effects, although in some miniature scenes real dust which is lighter than Fuller’s Earth is used. Very often the studio will send a crew of men through old buildings to gather dust from the rafters, to be used in a picture.

When dust is seen arising from running horses, etc., ground alfalfa is used. It makes a very real looking dust when photographed. Because gravel on the walks would make too much noise under the actors’ feet on the sound stages, artificial gravel is made from cork. It looks very real, but does not make any noise. If crunching foot-step noises are needed, they are usually made by a special sound device and then later added to the film.

Artificial rocks are made from plaster of paris, papier-mache, or balsa wood.

The chemist is also called upon to create chemical effects that will prevent risks to the actors. For example, in the RKO production She, Harry Redmond, who may be called the dean of studio chemists, was called upon to compound an oil that would burn with a suitable photographic effect in a salamander in the queen’s castle. In this picture Randolph Scott was pursued, so he upset the salamander on the stairway in order that the flames from the burning oil would prevent pursuit. Harry Redmond was called upon to compound an oil that would burn for exactly two minutes in such a way so as not to catch the entire setting on fire, burn without smoke, and with a minimum of heat so as not to harm the actors.

In another picture, The Last Days of Pompeii, Harry Redmond was called upon to make artificial lava. This was no simple problem, but he finally worked it out, using a combination of silicate soda, drilling mud used in the oil fields, and powdered aluminum. To this was added during the shooting of the scene a concentrated solution of caustic soda. Pipes which carried both solutions were run under the setting into cracks supposedly made in the city of Pompeii by Mt. Vesuvius. When the camera started “cranking” the solutions were pumped through these pipes and combined in the setting where the chemicals met. On combining they bubbled out of the cracks in the streets, and rolled off down the mountain. For fire and smoke effects a number of different methods are used. The smoke which is seen to seep through cracks is the result of the chemical titanium tetrachloride.

Sometimes a director wants a black smoke in one scene, or a white smoke in another. Such a demand is simple for the chemist. Black smoke is made by burning crude oils, while white smoke may be made from silicate tetrachloride.

The chemist of the motion picture must also be an inventor; for example, he must make a rain effect that will not be wet. One such device constructed by Harry Redmond increases the water pressure through a three-stage pump up to 500-pound pressure. It is then sprayed through a special jet, making a rain-like mist which is not very wet but still photographs as rain. Rain drops or moisture on an actor’s face are usually glycerine.

Many pictures require fog effects which are, of course, artificially produced. One method is to spray oil through an atomizer into the air in the set.

In Eddie Cantor’s picture, Kid Millions, a chemist was required to make a gigantic skating rink on which 32 girls could skate. A solution of sodium hyposulphite was run into the desired tank and crystallized by evaporation.