Modern Mechanix
Issue: Jun, 1937
Posted in: How to
No Comments on CREATING The SPECTACULARS (Jun, 1937) 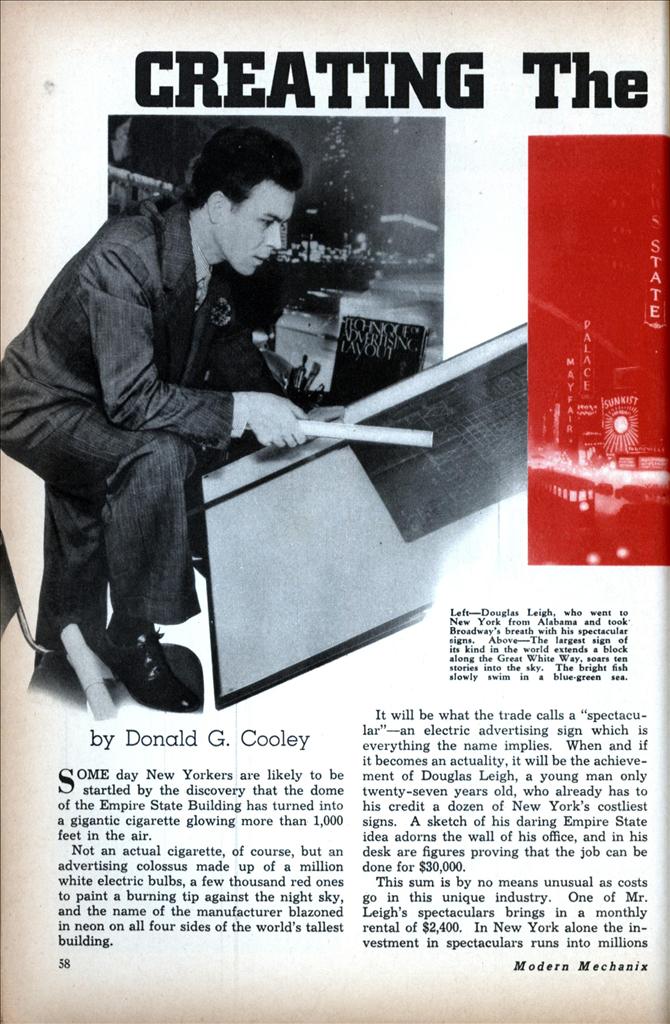 SOME day New Yorkers are likely to be startled by the discovery that the dome of the Empire State Building has turned into a gigantic cigarette glowing more than 1,000 feet in the air.

Not an actual cigarette, of course, but an advertising colossus made up of a million white electric bulbs, a few thousand red ones to paint a burning tip against the night sky, and the name of the manufacturer blazoned in neon on all four sides of the world’s tallest building.

It will be what the trade calls a “spectacular”—an electric advertising sign which is everything the name implies. When and if it becomes an actuality, it will be the achievement of Douglas Leigh, a young man only twenty-seven years old, who already has to his credit a dozen of New York’s costliest signs. A sketch of his daring Empire State idea adorns the wall of his office, and in his desk are figures proving that the job can be done for $30,000.

This sum is by no means unusual as costs go in this unique industry. One of Mr. Leigh’s spectaculars brings in a monthly rental of $2,400. In New York alone the investment in spectaculars runs into millions annually, and every city in the country makes generous contribution to a husky young giant of an industry which is as modern as today’s newspaper. Time was when an electric sign was regarded as breath-taking if it presented a few hundred bulbs which flashed on and off periodically, spelling out some trade name. Today the spectacular sign has borrowed a realistic technique from the motion picture, and the invention of the neon light has revolutionized an industry which is just coming into full maturity.

It is a strange and exciting business, that of erecting Broadway’s “spectaculars.” It is an art calling for the talents of the steelworker, the electrician, the artist, the mechanic and the financier. Miracles are wrought in neon tubing and electric bulbs. Light has become a medium for painting pictures which move, and tell a story.

Amazingly realistic bits of action are drawn by flashing lights which flow with the ripple of water, or leap and dart with the dash of sword-thrusts.

The mechanism which gives the breath of life to a spectacular sign is a complex mechanical miracle. In one of Mr. Leigh’s huge signs the penguin trademark of a cigarette manufacturer winks its eye off and on 100,000 times a day. Each single bulb in a sign, though it may be but one of 50,000, must flash off and on with split-second accuracy, contributing its brief spot of color to a sign which may be five or six stories high and half a block in length.

The biggest spectacular sign in the world, which Mr. Leigh regrets is not his, occupies an entire block on Broadway between Forty-fourth and Forty-fifth Streets, on the east side of Times Square. Soaring ten stories above the street, it represents multi-colored tropical fish slowly swimming in a sea-green sea. Higher than the Statue of Liberty, the green sign uses sufficient electricity each night to serve a city of 10,000. Seven and a half tons of electrical equipment are housed in a control room under the sign. The wiring alone totals 70 miles, sufficient to run two lines between Washington and Baltimore, and the neon tubing extends 1,084 feet. Total weight of the sign is 110 tons. The building on which the sign rests was especially built to bear the tremendous weight. The cost of the sign alone was $1,000,000.

How does a “spectacular” come into being? It begins with an idea, like the sketch of the Empire State cigarette already mentioned.

“The animation of a sign should tie up intimately with the product advertised,” Mr. Leigh said. “That is, it shouldn’t be motion for the sake of motion, but should tell a story relating to the product.”

His theories have proved themselves in actual practice. The success story of Douglas Leigh is the heartening tale of a young man who went out and created a job for himself. Not long ago he was working for a New York sign company, resigning when the depression cut his salary to $30 a week. * Today, at 26, he heads his own organization, Douglas Leigh, Inc., which has erected more than half a million dollars worth of signs in the Times Square district alone. He is an amazingly young, pleasant-spoken, mild-mannered man whose daring imagination has stamped its imprint on Father Knickerbocker’s theatrical district.

It is quite probable that a stream of real smoke will drift away realistically from the tip of that Empire State cigarette. It is a touch which can reasonably be expected of Mr. Leigh’s ingenuity. A similar bit of realism can be seen in the coffee sign he has erected on Broadway. In it a gigantic cup of coffee gives forth a cloud of appetizing steam! The steam is furnished by the New York Steam Corporation, and 50,000 pounds a month is used at a cost of $60. When first erected, the steam condensed and rained on Broadway pedestrians, but improved pipe insulation soon corrected that.

Mr. Leigh’s newest sign, recently erected for a beverage manufacturer, illustrates the new trend in spectaculars. The manufacturer’s trade mark is three interlocking circles. The problem was to devise some natural bit of action to fix the trade mark on the mind of the spectator. Douglas Leigh accomplished it by setting a neon clown to pitching quoits. The quoits are hurled over the face of the sign, dip down and loop neatly over a stake in the lower corner. The three quoits thus form the interlocking circles.

“A spectacular is good for three years,” Mr. Leigh said. “The sign is leased for that period and rented on a monthly basis. A sort of installment plan purchase. It’s not difficult to sell a sign. The real headache is the problem of financing.”

The rental fee includes everything—building and erection of the sign, inspection, repairs, rental of the site, electricity, etc. A crew of thirty is required to erect a new sign. Another corps of inspectors makes hourly rounds from sign to sign, replacing burnt-out bulbs and making sure the complicated electrical switches function perfectly. When a bulb burns out, as it does once a year on the average, it is replaced within a few minutes while, the sign is in operation.

The more elaborate “animations” of a spectacular are achieved with ordinary electric bulbs, while neon lighting is used more largely for borders, trade names, streaks of color, and the like. Bulbs are more flexible in painting action pictures and produce scenes of every graduation of color by use of glass stained to the desired shade. An animation is any individual bit of action—stars flickering, candles burning, words flashing on and off, etc. One of Mr. Leigh’s signs in Columbus Circle has fourteen animations, more than any other sign in the world.

When a sketch for a sign has been approved, the animations and color combinations are carefully indicated on the drawings. Blueprints must be made for the electricians to devise the wiring hook-up which will activate the units of the sign in proper sequence. The sign itself is built in a workshop with plenty of floor space where its gigantic sections can be laid out. One small portion of a spectacular may be large enough to fill a five-ton truck.

Each new sign is a custom-built job into which mass production methods cannot enter. Sheet steel is used for many sections of the sign and there is a special machine for punching light-socket holes through the metal.

A steel framework, constructed just like the riveted skeleton of a skyscraper, is the base on which the sign is mounted as the various sections come from the shop. Often the steel girders are several stories high, mounted on the roof of a building. Sites for displays are at a premium in congested districts like Times Square and property owners are well aware of the value of their property for such purposes. Therefore the sign manufacturer leases choice locations on his own initiative, erects his steel framework, and then sets out to sell a sign for that particular location. The steelwork is of course permanent, and when one sign has lived its life it is taken down, a few parts salvaged, and a new spectacular goes up in its place.

The electric brain of a spectacular sign is a marvelously intricate mechanism. It is housed in a small structure at the base of the steel framework. Switches, fuses, and contact devices abound in the complex profusion one would expect to find in a telephone exchange. Cables lead out to various portions of the sign and over them, at split-second intervals, flash the accurately timed signals which co-ordinate the thousands of bulbs into a perfect moving picture. Contacts are made by cams on a long revolving rod, which depress levers at the proper intervals and send current flowing through the sign.

Not satisfied with the effects produced by a single arrangement of bulbs, the sign designer makes wide use of “overlays.’* An overlay consists of bulbs which flash out two or more messages in the same space. Viewed in daylight, they appear very much as if a printer had stamped two sets of words one over the other. By night, of course, when only one sentence is illuminated at a time, the separate messages are spelled out distinctly.

A spectacular is regarded as a sign with more than 200 feet of neon tubing or electric bulbs. Other large signs which don’t quite meet these specifications are spoken of as “semi-spectaculars.” You will never discover a spectacular in which more than 35 per cent of the framework is occupied by the sign itself. Building regulations forbid it. The reason is obvious, since some of . the high winds which howl down Gotham’s canyons, striking a flat surface as large as an office building, could hurl the stoutest steel frame- work hundreds of feet to the street below with frightful damage.

“Red is the only type of neon that is any good for daylight signs,” Mr. Leigh explained. “Daytime signs call for an entirely different design technique from those intended for night-time use.”

The vastness of a spectacular sign staggers the imagination. A single letter in a word is often twice the height of a man. Elevated to positions often more than a hundred feet above the street, the spectator rarely realizes the immensity of the display.

Nowhere in the world can be found a more brilliant exhibition of spectacular signs than in New York’s Times square district. Every moviegoer is familiar with the blazing signs on Broadway above Forty-second street which directors insert in their dramas whenever New York atmosphere is called for.

For years Broadway has been famous as the Gay White Way, but it is blushingly changing its complexion from white to rosy red as young Mr. Leigh and others of his unique profession work their miracles in electric bulbs and neon tubing.