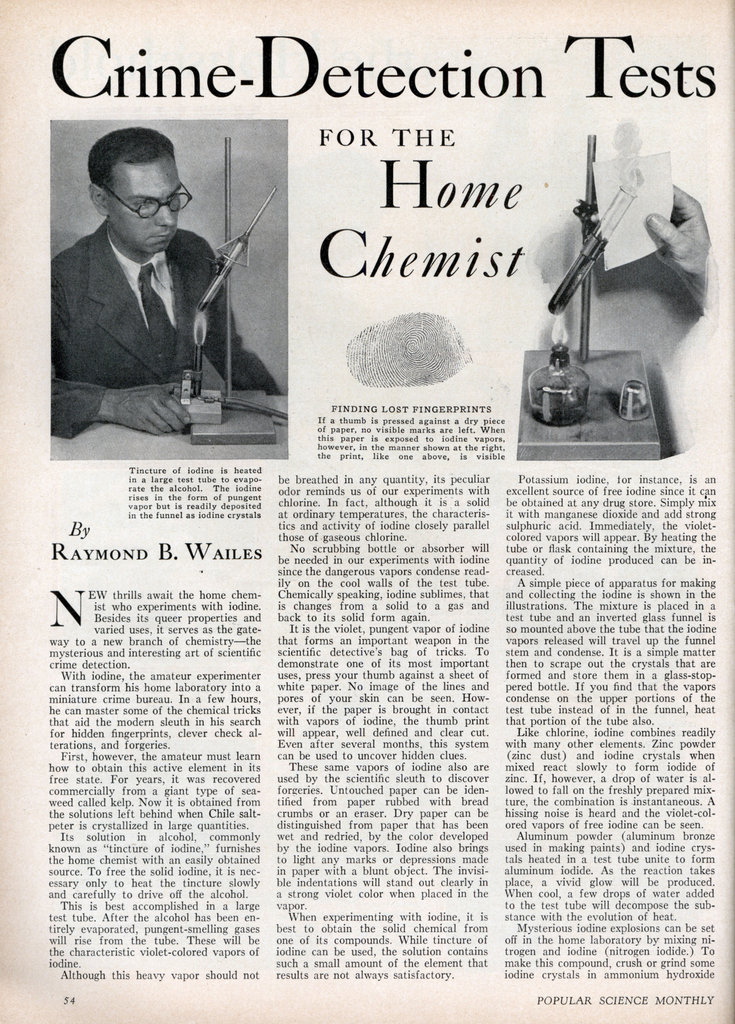 Crime-Detection Tests FOR THE Home Chemist

NEW thrills await the home chemist who experiments with iodine. Besides its queer properties and varied uses, it serves as the gateway to a new branch of chemistryâ€”the mysterious and interesting art of scientific crime detection.

With iodine, the amateur experimenter can transform his home laboratory into a miniature crime bureau. In a few hours, he can master some of the chemical tricks that aid the modern sleuth in his search for hidden fingerprints, clever check alterations, and forgeries.

First, however, the amateur must learn how to obtain this active element in its free state. For years, it was recovered commercially from a giant type of seaweed called kelp. Now it is obtained from the solutions left behind when Chile saltpeter is crystallized in large quantities.

Its solution in alcohol, commonly known as “tincture of iodine,” furnishes the home chemist with an easily obtained source. To free the solid iodine, it is necessary only to heat the tincture slowly and carefully to drive off the alcohol.

This is best accomplished in a large test tube. After the alcohol has been entirely evaporated, pungent-smelling gases will rise from the tube. These will be the characteristic violet-colored vapors of iodine.

Although this heavy vapor should not be breathed in any quantity, its peculiar odor reminds us of our experiments with chlorine. In fact, although it is a solid at ordinary temperatures, the characteristics and activity of iodine closely parallel those of gaseous chlorine.

No scrubbing bottle or absorber will be needed in our experiments with iodine since the dangerous vapors condense readily on the cool walls of the test tube. Chemically speaking, iodine sublimes, that is changes from a solid to a gas and back to its solid form again.

It is the violet, pungent vapor of iodine that forms an important weapon in the scientific detective’s bag of tricks. To demonstrate one of its most important uses, press your thumb against a sheet of white paper. No image of the lines and pores of your skin can be seen. However, if the paper is brought in contact with vapors of iodine, the thumb print will appear, well defined and clear cut. Even after several months, this system can be used to uncover hidden clues.

These same vapors of iodine also are used by the scientific sleuth to discover forgeries. Untouched paper can be identified from paper rubbed with bread crumbs or an eraser. Dry paper can be distinguished from paper that has been wet and redried, by the color developed by the iodine vapors. Iodine also brings to light any marks or depressions made in paper with a blunt object. The invisible indentations will stand out clearly in a strong violet color when placed in the vapor.

When experimenting with iodine, it is best to obtain the solid chemical from one of its compounds. While tincture of iodine can be used, the solution contains such a small amount of the element that results are not always satisfactory.

Potassium iodine, lor instance, is an excellent source of free iodine since it can be obtained at any drug store. Simply mix it with manganese dioxide and add strong sulphuric acid. Immediately, the violet-colored vapors will appear. By heating the tube or flask containing the mixture, the quantity of iodine produced can be increased.

A simple piece of apparatus for making and collecting the iodine is shown in the illustrations. The mixture is placed in a test tube and an inverted glass funnel is so mounted above the tube that the iodine vapors released will travel up the funnel stem and condense. It is a simple matter then to scrape out the crystals that are formed and store them in a glass-stoppered bottle. If you find that the vapors condense on the upper portions of the test tube instead of in the funnel, heat that portion of the tube also.

Like chlorine, iodine combines readily with many other elements. Zinc powder (zinc dust) and iodine crystals when mixed react slowly to form iodide of zinc. If, however, a drop of water is allowed to fall on the freshly prepared mixture, the combination is instantaneous. A hissing noise is heard and the violet-colored vapors of free iodine can be seen.

Aluminum powder (aluminum bronze used in making paints) and iodine crystals heated in a test tube unite to form aluminum iodide. As the reaction takes place, a vivid glow will be produced. When cool, a few drops of water added to the test tube will decompose the substance with the evolution of heat.

Mysterious iodine explosions can be set off in the home laboratory by mixing nitrogen and iodine (nitrogen iodide.) To make this compound, crush or grind some iodine crystals in ammonium hydroxide (household ammonia will serve). Be sure to keep the crystals under the liquid and stir frequently for an hour or so. Then pour off the liquid and collect the black nitrogen-iodide crystals, placing them on pieces of paper. As these crystals dry, you will note a peculiar property. Each crystal will explode at the slightest touch and a violet cloud of iodine will puff up from the chemical. In fact, the substance often will explode spontaneously. The explosions, which are harmless, will sound like those of small potash caps.

This strange chemical phenomenon is caused by the violent decomposition of the nitrogen iodide. Moist, it is a stable compound, but dry, it decomposes so rapidly that it explodes. When mercury and iodine unite to form mercuric iodide, they open the way to many interesting experiments in both chemistry and physics. At room temperature, mercuric iodide is a red powder. However, when heated to about 150 degrees Centigrade, it changes mysteriously to yellow. Because it displays this property, mercuric iodide is often referred to as being enantiotropic. This color change is due to a change in the crystalline form of this mysterious substance.

In time, the yellow mercuric iodide will return to its original red color. Unaided, this change may require two or three days but it can be brought back in a few seconds by “painting” the substance with a dry brush or by stroking it lightly with your finger.

When the mercuric-chloride solution is added, a red precipitate will be formed.

When the reaction is finally completed, allow the red precipitate to settle, pour off the clear liquid, and add fresh water. Repeat this process several times to wash the preciéitate and remove any chemicals still in solution. Finally, the mercuric iodide can be filtered off in a paper funnel, dried, and placed in a bottle.

The precipitate can be scraped from the filter paper with a spatula made by rounding the edges of a strip of thin celluloid. An iron or metal knife should not be used since it is likely to combine with the chemical.

A simple yet mystifying experiment with heat can be performed with this red powder. To prepare the apparatus, fasten a cross or other figure cut from thin copper to a thin square of wood, using a cement of the type formed by dissolving scraps of celluloid in acetone. Then cement a sheet of white paper over the metal figure and wood base and apply a thin coat of red paint made by rubbing some of the red mercuric iodide you have made with cement or weak shellac.

When the paint has dried, hold the red square near the flame of an alcohol lamp or gas burner. Gradually, the portions of the paper not in contact with the metal will turn a vivid yellow, while the paper covering the cross will remain unchanged. This color-changing property of mercuric iodide also can be used by the amateur chemist to show the relative heat conductivity of metals. First, obtain wires of several different metals and coat them with shellac or some variety of paint. Then after they havt dried, coat them with a paint made by mixing iodide with some base such as shellac.

When this final coat has dried, arrange the wires so they project into the flame of an alcohol or gas burner. The ends of the wires will soon become hot and the rapidity with which the heat is conducted along their lengths will be shown by the change in color from red to yellow.

A peculiar, heavy liquid can be made by dissolving mercuric iodide in potassium-iodide solution. The resulting fluid will have such a high specific gravity that stones, glass stoppers, and other heavy objects placed on its surface will float.