While the idea of a cross country cruise ship was pretty far fetched, the technology described seems to work. The Rolligon corporation is actually a going concern that makes big vehicles with really big rolligons. 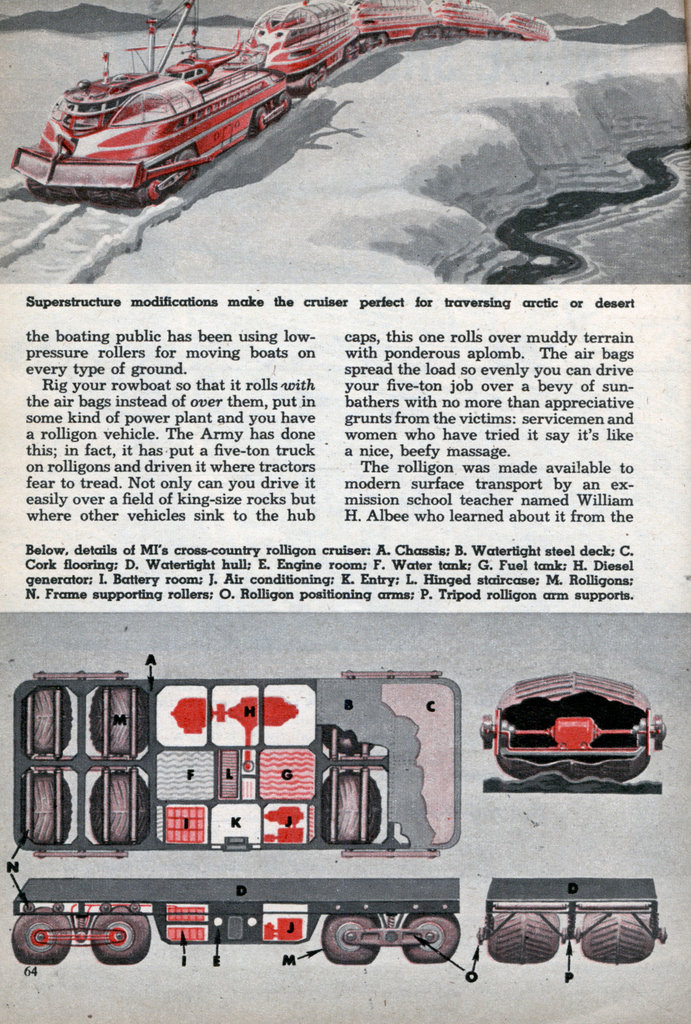 You’ll be riding on air â€” squashy bags of it that roll happily over every obstacle.

THE crazy, mixed-up amphibious train shown on this page, half bulldozer, half river boat and all Tom Swift, is only an adaptation of a vehicle now being operated experimentally by the Army.

The rolligon wagon rolls slowly but implacably on a number of limp blimpsâ€”sausage-like air bags without much air in them. These saggy bladders are a vast improvement over the wheel when it comes to moving things over sand, muck, rocks and rubble. For several years the boating public has been using low-pressure rollers for moving boats on every type of ground.

Rig your rowboat so that it rolls with the air bags instead of over them, put in some kind of power plant and you have a rolligon vehicle. The Army has done this; in fact, it has put a five-ton truck on rolligons and driven it where tractors fear to tread. Not only can you drive it easily over a field of king-size rocks but where other vehicles sink to the hub caps, this one rolls over muddy terrain with ponderous aplomb. The air bags spread the load so evenly you can drive your five-ton job over a bevy of sun-bathers with no more than appreciative grunts from the victims: servicemen and women who have tried it say it’s like a nice, beefy massage.

The rolligon was made available to modern surface transport by an ex-mission school teacher named William H. Albee who learned about it from the Eskimos. Albee’s stone-age students up on the Bering Strait use inflated sealskins to overland their big umiaksâ€” medium-sized barges covered with skins and often loaded with five tons or more of walrus meat.

In the accompanying illustrations MI has tried to visualize a modern use of Albee’s concept for you. Basically, the machine is an amphibious, off-the-road weight carrier, with a shallow, bargelike chassis and a central, underslung power compartment.

In this MI design, an electric drive has been selected, with motors mounted inside the rolligon hubs. Current is produced by a diesel generator unit in the watertight power compartment.

This is MI’s concept of a rolligon cruise ship. Whatever form the rolligon eventually takes, there can be little doubt that Bill Albee’s squashy, Eskimo air-bags have provided mankind with a radically new form of transportation.