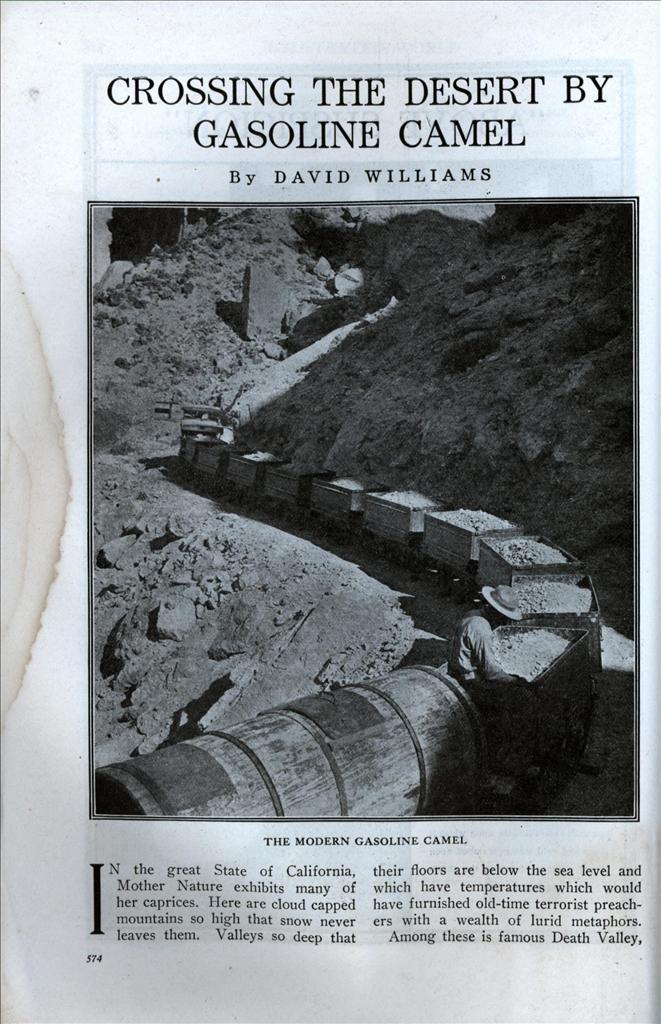 CROSSING THE DESERT BY GASOLINE CAMEL

IN the great State of California, Mother Nature exhibits many of her caprices. Here are cloud capped mountains so high that snow never leaves them. Valleys so deep that their floors are below the sea level and which have temperatures which would have furnished old-time terrorist preachers with a wealth of lurid metaphors.

Among these is famous Death Valley, which is best described as a desert gash in the face of the earth. Its floor is two hundred feet below the level of the sea. The temperature in this superheated crevice is constantly from one hundred twenty to one hundred forty degrees Fahrenheit—a veritable Hell on earth.

It would hardly appear as an appropriate place for the home of an important industry, yet indomitable men have conquered this arid area and have wrested from it a treasure, which in the past few years has added over thirty-six million dollars to the riches of this country, and which will yield more millions in years to come.

This treasure is chemical borax—the friend of every housewife—which is derived from the colemanite ores found in the mountains of Death Valley. It was discovered in the early eighties. Like nearly all treasures it has been difficult to bring within reach and its methods of transportation are shown in the accompanying photographs. These show yet other contrasts: the ubiquitous American mule (California’s substitute for the camel) and his present day successor, the aggressive and high-powered gasoline motor; the slow cumbersome wagon transport and the light, rapid train. The tiresome journey to and from the workings is now an incident instead of an event.

The mineral at first was transported a distance of one hundred sixty-five miles from the mines in the valley to the railroad by means of the famous “twenty-mule team”. Twenty days under the scorching sun were required to make this trip. The water springs were about sixty miles apart and it was necessary to haul water for the men and the animals.

The outfit consisted of mules driven two abreast; these formed a line 120 feet in length. The driver rode on the “nigh wheeler” and drove the mules by a single rein called a jerk line fastened to the head of the lead mule. If he wished them to go to the right he gave a strong steady pull. To the left he gave a series of jerks. Hence the name of the line. These animals pulled two wagons containing twenty tons of ore and a water tank holding one thousand two hundred gallons of water.

This method of transport was in use from 1880 to 1888. The production of borax steadily increased and the mules were supplanted by traction engines. These in turn’ gave way to a narrow-gage railway, using geared locomotives. A few years later the mineral had become of such importance that a standard-gage railroad was built to the Death Valley holdings. In time these were worked out and it became necessary to open other deposits at a distance. To connect the railroad with these new workings, a narrow-gage railroad has been built and the gasoline locomotives haul a train of ten cars with a water tank by way of caboose to carry supplies for the mining camps and plants.

The engines of these trains weigh about six tons and are propelled by friction-drive motors of much the same type as an automobile engine. They develop fifty horsepower and consume from ten to twelve gallons of gasoline in a work day of ten hours.