Film documentaries of preparations and outcomes may be found below: 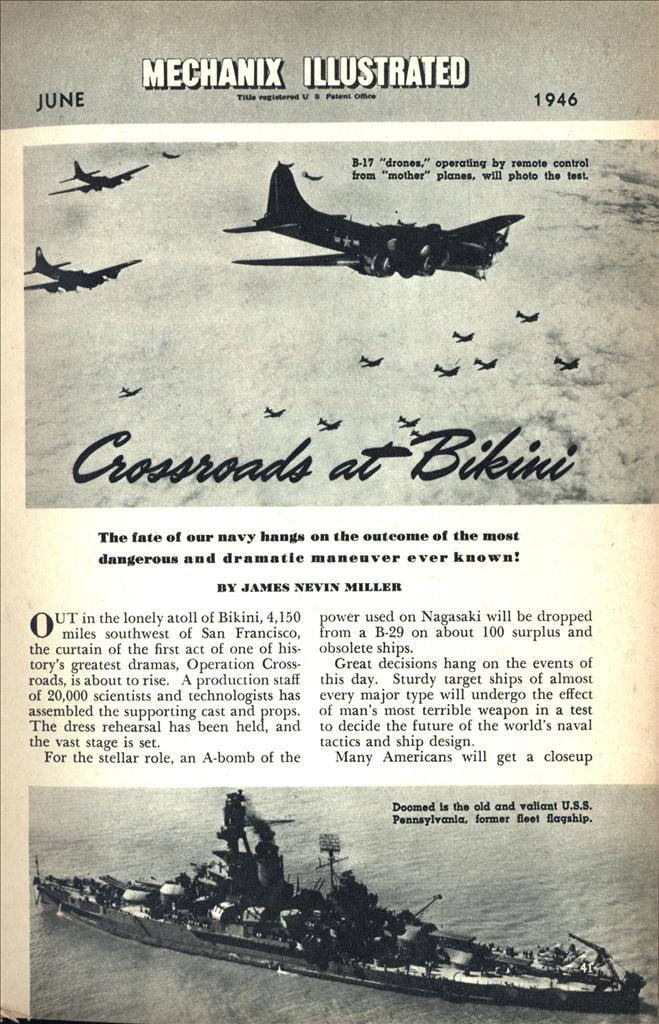 The fate of our navy hangs on the outcome of the most dangerous and dramatic maneuver ever known!

OUT in the lonely atoll of Bikini, 4,150 miles southwest of San Francisco, the curtain of the first act of one of history’s greatest dramas, Operation Crossroads, is about to rise. A production staff of 20,000 scientists and technologists has assembled the supporting cast and props. The dress rehearsal has been held, and the vast stage is set.

For the stellar role, an A-bomb of the power used on Nagasaki will be dropped from a B-29 on about 100 surplus and obsolete ships.

Great decisions hang on the events of this day. Sturdy target ships of almost every major type will undergo the effect of man’s most terrible weapon in a test to decide the future of the world’s naval tactics and ship design.

Many Americans will get a closeup view of the exploding bomb, for remote-controlled television apparatus operating within a range of 11 miles has been set up there. Automatic movie cameras are set to record the entire show from “ghost” planes and well protected shore positions.

Our military and naval leaders already know what happens when the A-bomb is detonated above dry land. Their concern now is with its destructive potential when exploded above and on and under water. For this it is necessary to have three tests.

It is the first test, the explosion of a bomb “several hundred feet” in the air above the target, that is tentatively scheduled for July or August. A B-29 will release the bomb from 30,000 feet. The second test is set for a few months later. For the first two tests shallow water is needed, so the debris can be salvaged for study. For the final and most difficult test, scheduled for next year, deep water will be needed, so as to minimize the effect of the ocean’s bottom on the results. Vice Admiral W.H.P. Blandy, who is in charge of the tests, says it will require depths of “several thousand feet of water.”

The submarines will take the blast under the water, lashed to 30-ton concrete blocks on the bottom of the lagoon.

Some 60 ships, grouped 15 to 20 miles away from the explosion center, comprise the support group of vessels. Included are Admiral Blandy’s flagship, the Mount McKinley. Patrol duty is handled by 9 vessels. Repair and service unit assignments have been given 25 other ships. Twenty regular salvage units and 2 salvage lifting vessels are included. There are 10 dispatch and boat pool units, 12 transport vessels, two medical units and one survey ship. Helicopters too are on hand to maintain communication between vessels and planes.

The remote atoll of Bikini was chosen as the ideal test theater because it has less than 200 inhabitants, easily evacuated, and because the area is so isolated as not to endanger the lives of persons living nearby. Bikini is the northernmost of the Ralik chain of the Marshall Islands. The atoll is about 21 miles long by 10 wide, and forms a nearly perfect oval of barely submerged coral dotted with some 20 islands rising a few feet above the ocean at varying intervals along the atoll’s rim.

Within the atoll’s perimeter is a sandy-bottomed lagoon of some 250 square miles over which the target fleet will be arrayed. The average depth of the lagoon is 100 to 180 feet, which permits easy salvage of any vessels sunk by the explosions.

The deployment of the observation vessels probably will be 15 to 20 miles away from the explosion center—for safety, and in order to gauge accurately the effect of the bomb. All that is known about the grouping of the target fleet is that it will be “in a manner calculated to give effects varying from probable destruction to negligible damage among the various ships of each type.”

Every phase of the tests will be photographed. Batteries of special cameras have been set up atop 100-foot steel towers arranged in a ring around the atoll. They are housed in small rooms, each shielded in lead against X-rays and other radioactive hazards. Inside the shielding are air-tight, waterproof boxes, and within these are the cameras. Operation will be automatic, by remote control.

Overhead, fleets of drones (radio-controlled planes) will photograph and measure the explosions. Eight F6F Hellcats, mothered by a like number of piloted Hellcats flying a safe 10 to 20 miles away, have been selected for Navy use. The Army will use B-17’s.

Other photographic and measuring equipment, as well as civilian and military scientists and technicians, will be carried by a Navy seaplane squadron and by eight B-29’s and two C-54’s assigned to Army air groups. The latter will operate from Kwajalein. Among the air groups are an Army Transport Command outfit. Altogether some 70 Army planes, including C-46’s for transport duty, will participate.

Television cameras have been set up on two sites in the target area, and recording and movie cameras will “shoot” the televised scenes.

Adequate measures had to be devised to prevent damage to film from radioactivity.

Timing was a critical matter. Many of the cameras are limited in length of run; and since they must be operated by remote control, premature or late starting would introduce the possibility of not obtaining the pictures desired. Then, the blinding flash at the instant of the bomb’s detonation requires that all observers wear special dark glasses of such density that normal vision will be impossible.

Since the ground cameras on Bikini atoll had to be heavily enclosed, there was the further matter of proper temperature control to prevent spoilage of film and condensation on the lens and other parts.

No single thing anywhere, at any time, has ever been given such a tremendous test. What will happen? No one knows for sure. It’s precisely because the bomb effects cannot be anticipated that the test has to be made.

The safety of the United States fleet—which means the security of all the people in our country—is vitally involved.