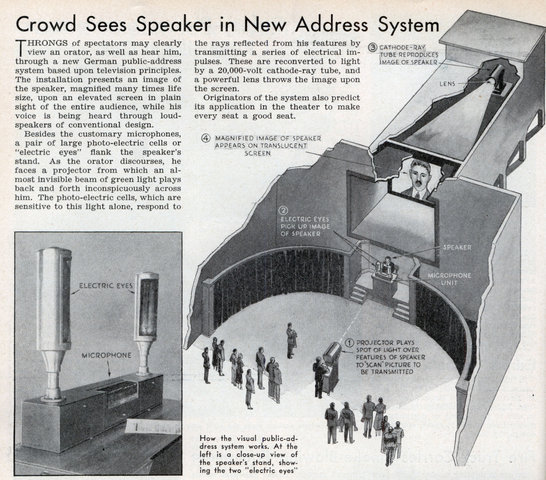 THRONGS of spectators may clearly view an orator, as well as hear him, through a new German public-address system based upon television principles. The installation presents an image of the speaker, magnified many times life size, upon an elevated screen in plain sight of the entire audience, while his voice is being heard through loudspeakers of conventional design.

Besides the customary microphones, a pair of large photo-electric cells or “electric eyes” flank the speaker’s stand. As the orator discourses, he faces a projector from which an almost invisible beam of green light plays back and forth inconspicuously across him. The photo-electric cells, which are sensitive to this light alone, respond to the rays reflected from his features by transmitting a series of electrical impulses. These are reconverted to light by a 20,000-volt cathode-ray tube, and a powerful lens throws the image upon the screen.

Originators of the system also predict its application in the theater to make every seat a good seat.