This has a rather Inspector Gadgetish look to it with the extending tail. I’m pretty sure you’d want to put the propeller in the back so you don’t, you know, chop your feet off. 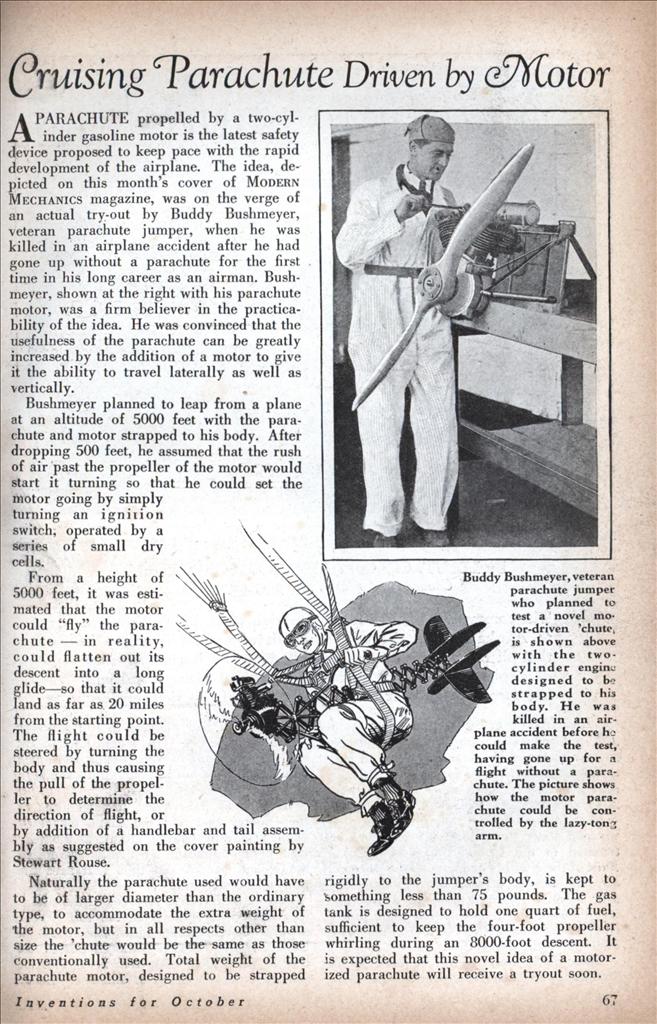 A PARACHUTE propelled by a two-cylinder gasoline motor is the latest safety device proposed to keep pace with the rapid development of the airplane. The idea, depicted on this month’s cover of Modern Mechanics magazine, was on the verge of an actual try-out by Buddy Bushmeyer, veteran parachute jumper, when he was killed in an airplane accident after he had gone up without a parachute for the first time in his long career as an airman. Bushmeyer, shown at the right with his parachute motor, was a firm believer in the practicability of the idea. He was convinced that the usefulness of the parachute can be greatly increased by the addition of a motor to give it the ability to travel laterally as well as vertically.

Bushmeyer planned to leap from a plane at an altitude of 5000 feet with the parachute and motor strapped to his body. After dropping 500 feet, he assumed that the rush of air past the propeller of the motor would start it turning so that he could set the motor going by simply turning an ignition switch, operated by a series of small dry cells.

From a height of 5000 feet, it was estimated that the motor could “fly” the parachute — in reality, could flatten out its descent into a long glide—so that it could land as far as 20 miles from the starting point. The flight could be steered by turning the body and thus causing the pull of the propeller to determine the direction of flight, or by addition of a handlebar and tail assembly as suggested on the cover painting by Stewart Rouse.

Naturally the parachute used would have to be of larger diameter than the ordinary type, to accommodate the extra weight of the motor, but in all respects other than size the ‘chute would be the same as those conventionally used. Total weight of the parachute motor, designed to be strapped rigidly to the jumper’s body, is kept to Something less than 75 pounds. The gas tank is designed to hold one quart of fuel, sufficient to keep the four-foot propeller whirling during an 8000-foot descent. It is expected that this novel idea of a motorized parachute will receive a tryout soon.