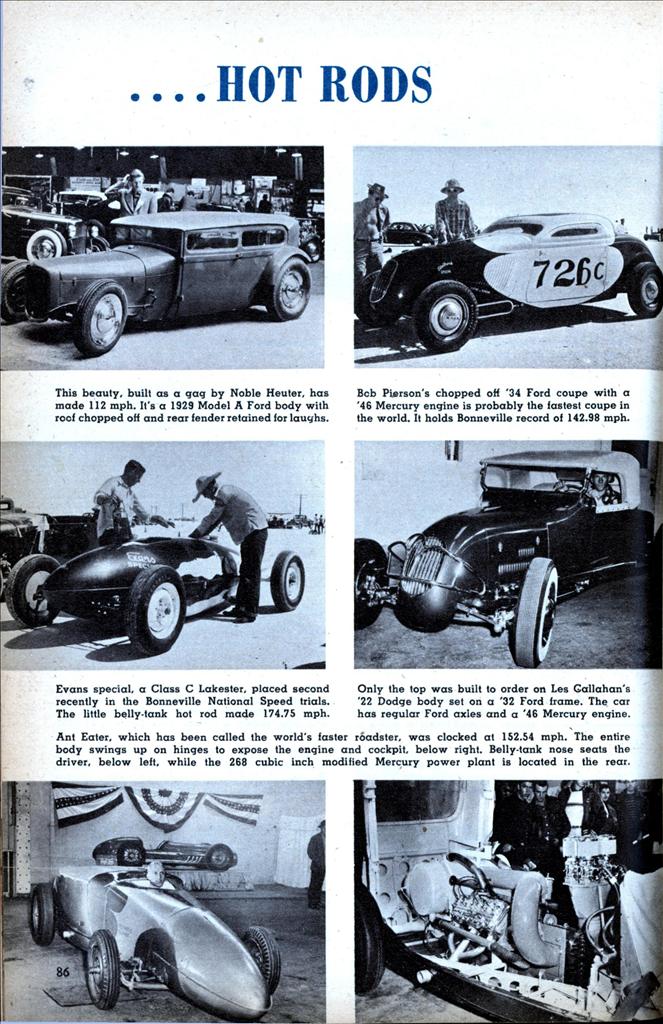 What are they doing? Well, the next time you take a spin down Lincoln Highway, take a good look at the cars that whiz by. You’ll be startled to realize the high percentage of unusual vehicles. For America’s auto enthusiasts are buying and building custom cars and hot rods as never before.

These special jobs reflect not only the individuality of their owners but the basic individuality of America. • Lon Hurley built this $8,000 dream car in eight months. Hood, grille and fenders are Cadillac parts while rear deck and doors are original design.

This Packard model never got past the experimental stage. Built to make over 125 mph. it represents an investment of more than $200,000.

Small German auto which looks like a racing car is called the Porsche. It has a four-cylinder engine in the rear of the two-seater coupe body.

Built in 1939. this French custom car has a body designed by Figoni & Falaschi and a Delahaye V-12 chassis. Owner says it can make over 115 mph.

This 17-year-old double-cowl Duesenberg phaeton is a supercharged show model with a body which was specially built by Brunn of Buffalo, N. Y. It was later listed and sold as a 1934 model.

One of the classic cars of the 1930’s, this Auburn super-charged speedster can make over 100 mph —and there’s a plaque on dashboard to prove it.

Recent motor show in Paris displayed this Super-leggera Ferrari, a long nosed Italian car. It’s only a two-seater although it has a sports coupe body.

Le Baron of Detroit built the body of this Chrysler Newport in 1939. It has a wide separation between the front and the back seat and sold for $25,000.

This beauty, built as a gag by Noble Heuter, has made 112 mph. It’s a 1929 Model A Ford body with roof chopped off and rear fender retained for laughs.

Bob Pierson’s chopped off ’34 Ford coupe with a ’46 Mercury engine is probably the fastest coupe in the world. It holds Bonneville record of 142.98 mph.

Only the top was built to order on Les Callahan’s ’22 Dodge body set on a ’32 Ford frame. The car has regular Ford axles and a ’46 Mercury engine.

Ant Eater, which has been called the world’s faster roadster, was clocked at 152.54 mph. The entire body swings up on hinges to expose the engine and cockpit, below right. Belly-tank nose seats the driver, below left, while the 268 cubic inch modified Mercury power plant is located in the rear.

Three-quarter midget car built by Bob Feuerhelm has an all-plastic body and a motorcycle J.A.P. 30.50 cubic-inch rear engine, seen at left. Association which regulates three-quarter midget races specifies that all entrants must agree to sell cars for $2,000 in order to keep investment down.

Carash Custom is a ’36 Plymouth with a Ford rear and a modified ’32 Cadillac V-16 motor. It’s handmade from sheet steel over tubular framework.

Yellow racer built by Fred Ige has a ’25 Model T Ford body and frame, a ’28 Hudson axle and a ’41 Mercury motor, shown at left. The car is all hand-made with aluminum shell and grille, full belly pan, bucket seat upholstered in plastic, louvered hood, Ross steering wheel and safety hubs on the wheels.

Screwdriver, a hand built streamliner owned by Bob Arner of Culver City, Calif., has had many motors in it—now a ’45 Mercury. It’s done 139 mph.

Designed by American Gl Pat Leighton in a Jap prison camp, this ’32 Ford channeled roadster with a ’42 Mercury engine has made 117.64 mph.