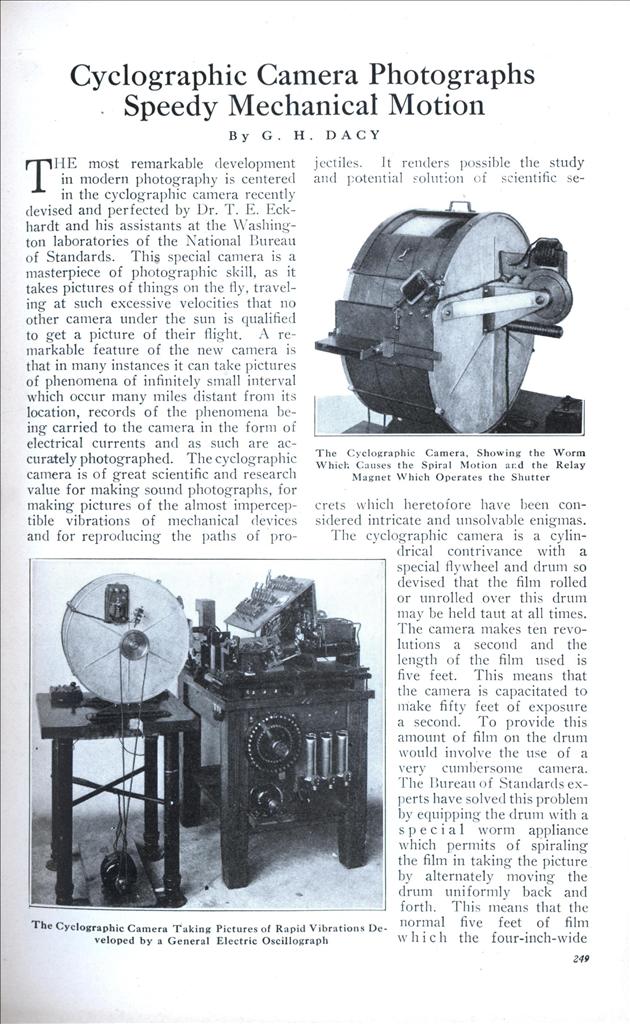 THE most remarkable development in modern photography is centered in the cyclographic camera recently devised and perfected by Dr. T.E. Eckhardt and his assistants at the Washington laboratories of the National Bureau of Standards. This special camera is a masterpiece of photographic skill, as it takes pictures of things on the fly, traveling at such excessive velocities that no other camera under the sun is qualified to get a picture of their flight. A remarkable feature of the new camera is that in many instances it can take pictures of phenomena of infinitely small interval which occur many miles distant from its location, records of the phenomena being carried to the camera in the form of electrical currents and as such are accurately photographed. The cyclographic camera is of great scientific and research value for making sound photographs, for making pictures of the almost imperceptible vibrations of mechanical devices and for reproducing the paths of projectiles. It renders possible the study and potential solution of scientific secrets which heretofore have been considered intricate and unsolvable enigmas. The cyclographic camera is a cylindrical contrivance with a special flywheel and drum so devised that the film rolled or unrolled over this drum may be held taut at all times. The camera makes ten revolutions a second and the length of the film used is five feet. This means that the camera is capacitated to make fifty feet of exposure a second. To provide this amount of film on the drum would involve the use of a very cumbersome camera. The Bureau of Standards experts have solved this problem by equipping the drum with a special worm appliance which permits of spiraling the film in taking the picture by alternately moving the drum uniformly back and forth. This means that the normal five feet of film which the four-inch-wide camera can carry can be so operated as to accommodate forty feet of actual picture by limiting the exposure to one-half inch per revolution, and spiraling the film backwards and forwards eight times in making that amount of exposure.

The. worm which causes the spiral motion of the film is operated by a very sensitive relay magnet which is also connected directly with the shutter in such a manner that the shutter opens and begins to take the picture as soon as the worm and drum become active and start the spiral movement. The shutter consists of a special leaf arrangement with the necessary prisms and ground glass arranged to focus on the film. A small electric motor is used to operate the drum cylinder and to unroll the film at a uniform speed. Ordinarily, as the motor operates the drum, the worm idles at leisure. When the spiral movement of the drum is desired, this worm is energized by means of the relay magnet. In order to make a sound photograph with the new camera, it is necessary to provide some reflecting surface which will indicate the variations in the air pressure which prevail. Small mirror attachments are employed for this purpose. In practical, mechanical shops and factories, the new camera will be invaluable where trouble or breakdowns occur with vibrating machinery. Cyclographic photographs are equivalent mechanically to X-ray pictures. The new camera differs from the average motion picture camera inasmuch as its film is moving continuously during exposure while the “movie” film is made by intervals. An idea of the scientific importance of the cyclographic photographs of rapidly moving bodies may be gained from the fact that time can be measured to approximately one one-millionth of a second on the exposed film.