Dairy Industry In General Can Look Forward To Another Good Year (Jan, 1967) 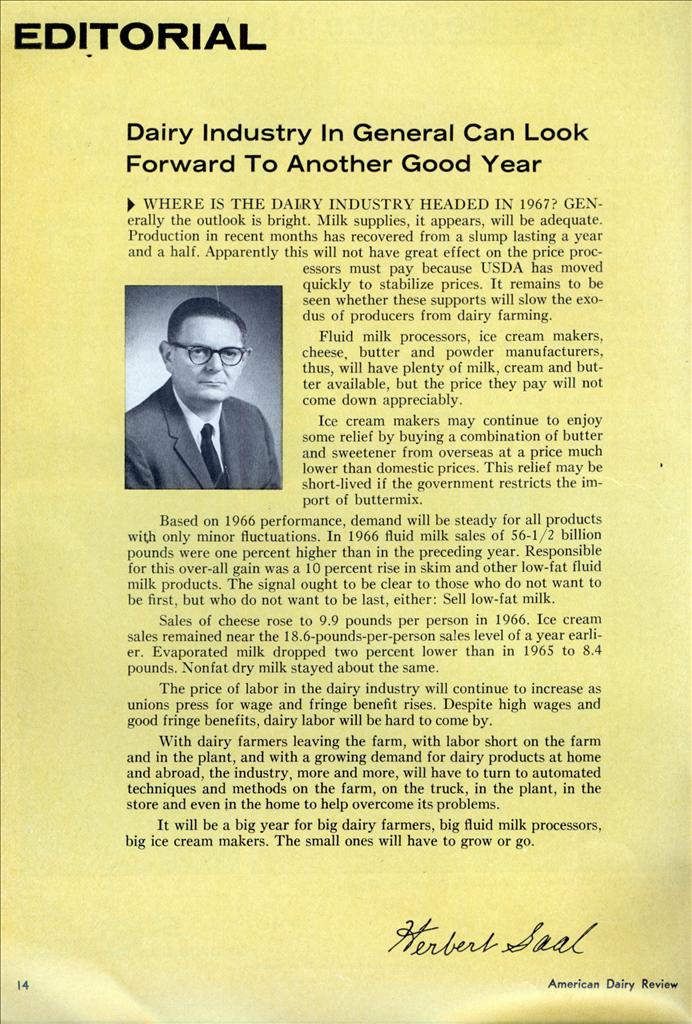 Dairy Industry In General Can Look Forward To Another Good Year

WHERE IS THE DAIRY INDUSTRY HEADED IN 1967? Generally the outlook is bright. Milk supplies, it appears, will be adequate. Production in recent months has recovered from a slump lasting a year and a half. Apparently this will not have great effect on the price processors must pay because USDA has moved quickly to stabilize prices. It remains to be seen whether these supports will slow the exodus of producers from dairy farming.

Fluid milk processors, ice cream makers, cheese, butter and powder manufacturers, thus, will have plenty of milk, cream and butter available, but the price they pay will not come down appreciably.

Ice cream makers may continue to enjoy some relief by buying a combination of butter and sweetener from overseas at a price much lower than domestic prices. This relief may be short-lived if the government restricts the import of buttermix.

Based on 1966 performance, demand will be steady for all products with only minor fluctuations. In 1966 fluid milk sales of 56-1/2 billion pounds were one percent higher than in the preceding year. Responsible for this over-all gain was a 10 percent rise in skim and other low-fat fluid milk products. The signal ought to be clear to those who do not want to be first, but who do not want to be last, either: Sell low-fat milk.

Sales of cheese rose to 9.9 pounds per person in 1966. Ice cream sales remained near the 18.6-pounds-per-person sales level of a year earlier. Evaporated milk dropped two percent lower than in 1965 to 8.4 pounds. Nonfat dry milk stayed about the same.

The price of labor in the dairy industry will continue to increase as unions press for wage and fringe benefit rises. Despite high wages and good fringe benefits, dairy labor will be hard to come by.

With dairy farmers leaving the farm, with labor short on the farm and in the plant, and with a growing demand for dairy products at home and abroad, the industry, more and more, will have to turn to automated techniques and methods on the farm, on the truck, in the plant, in the store and even in the home to help overcome its problems.

It will be a big year for big dairy farmers, big fluid milk processors, big ice cream makers. The small ones will have to grow or go.